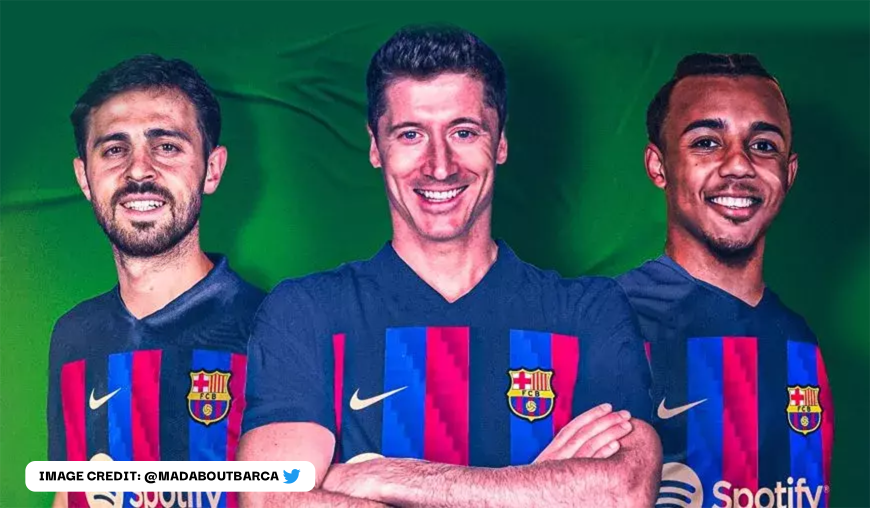 After a disastrous start to 2021/22 left them stranded in mid-table under Ronald Koeman, there was talk of the death of FC Barcelona. By the end of the campaign, Xavi had brought hope back to Camp Nou again, finishing LaLiga in second, helped by an unforgettable 4-0 thrashing of Real Madrid at the Estadio Santiago Bernabéu.

This summer is one that has served to reignite the flames of hope. Like a phoenix from the ashes, where Barça fans once spent their summer months dreaming of the biggest names in football, they’re back at it again. Even though they’re still in hundreds of millions of euros of debt, and racking up losses, they’re pursuing big names.

The club’s members approved a financial plan which included the sale of 10% of the club’s television rights over 25 years to bring in €600 million to fund the transfer market this summer and help to restabilise the club.

That has brought a welcome boost to Camp Nou, and to Xavi’s plans, with all eyes now on quite how that would work and how Barcelona could line up come August. With transfer business still to be done and Xavi still settling on his strongest team, this prediction takes a look at what could lie ahead for the Catalans.

In goal, Marc Andre ter Stegen will continue to be first choice. 2021/22 was his worst season since joining the club, as he conceded 6.43 goals more than xG would have expected him to concede. At times there has been speculation that Xavi isn’t entirely convinced by the German, but it’s evident that in a summer with limited resources, it’s not a priority to change a settled goalkeeper.

The back four will have some more significant changes. At right-back, Dani Alves’ contract has not been extended and it is crystal clear that Xavi is not convinced by Sergiño Dest. That has seen Chelsea captain César Azpilicueta occupy the role of favourite to step in, but negotiations with the Blues seem to have moved to the backburner after the club extended his contract unilaterally and prevented the option of a free transfer. If that deal can’t be done, Dest will step up and look to prove himself in this second chance which now seems inevitable as exit talk has died down since January.

In the middle, Gerard Piqué will have a less influential role after Xavi developed concerns about off the field distractions and his loss of pace, turning 36 in the course of the 2022/23 campaign. That could mean that Ronald Araújo will step up into a leadership role, with Sevilla’s Jules Koundé the top target to join him. Koundé has also attracted interest from Chelsea and Newcastle but is said to prefer a move to Camp Nou, though it won’t come cheap.

In midfield, the headline change will depend upon the future of Frenkie de Jong and Bernardo Silva. De Jong looks to be forced out of the club by Barcelona, who are desperate to sell him to raise the funds required to bring in money for other signings. Bernardo Silva is the top target to replace him, and was a Barça fan as a boy, but he faces the complication of the finances of any deal. Manchester City seem reluctant to allow him to move on and that could cost Barcelona more than they can afford.

Alongside him, this could be Sergio Busquets’ final season as first choice in the holding role and Pedri will be hoping to put the injury concerns of last season behind him after a full summer of rest. Pedri was impressive in 2021/22, but hamstring issues at the start and end of the season meant he was only really at his peak from January to April.

In attack, Robert Lewandowski’s arrival will see him lead the line. The Pole would be the leading force in attack and act in a number nine role which has not been seen for some time. Luuk de Jong provided a similar presence, with a very different level of quality, last season, and before that you may have to go as far back as Zlatan Ibrahimović in 2010.

Either side of him will be January addition Ferran Torres and youngster Ansu Fati, when fit. Fati’s injury struggles have been well documented, last playing a full 90 minutes in July 2020. Having failed to overcome a meniscus tear for 12 months, he’s since struggled with muscle problems that have plagued him continually.

Torres has also settled in well since his January arrival from Manchester and has started to find the back of the net after an initial slow start. The Spaniard will likely play a key role for club and country in the World Cup in the winter, so will be more motivated than ever.

According to speculation, Robert Lewandowski is the star man at 1.35 to join the club this summer. He has been the club’s top target since the end of the season, if not before, and they have not hidden their desire to bring him in. When asked about him, Laporta replied, “if we can sanitise our finances, we can complete operations.” He certainly wasn’t hiding his interest in the Bayern man.

Another high-profile name is Bernardo Silva, who is 2.75 to sign for Barcelona. This one does seem to be more of an outside bet and a dream for the Culés, but one that they are pretty insistent upon. Even in an interview with Pep Guardiola after confirming a pre-season friendly between Barcelona and Manchester City, Laporta jokingly asked the ex-Barça coach if Silva would be part of his team.

Another outside name in the betting includes Raphinha, whose future could hinge upon what Ousmane Dembélé decides to do regarding his new contract. At odd of 7, it looks unlikely that the deal will go ahead, provided there are no unexpected turns, but given that his agent Deco is good friends with Barcelona president Joan Laporta, a surprise is still possible.

Who will Barcelona sell this summer?

Frenkie de Jong could be the most high-profile departure. Odds for him to join Manchester United are as short as 1.3, with odds for him to stay at Camp Nou at 3.5. The Dutchman’s stay in Catalonia has been a bizarre one, given that he started 79% of matches for Barcelona last season even as he lost some presence.

Signed as the man to be a long-term replacement for Xavi, he’s never quite hit the heights. Far from the flop that some have labelled him, he’s been a performer Barcelona have been able to rely on without ever necessarily standing out as one of the team’s stars.

Another question mark hanging over the club is the future of Ousmane Dembélé. Linked with Paris Saint-Germain and Chelsea, his contract with Barcelona expires on 30th June and he is yet to respond to Barcelona’s latest offer. He has worked previously with Thomas Tuchel at Borussia Dortmund with the German describing the French winger as the best talent he has ever worked with. The feeling seems to be mutual between the pair with Dembele in April of last year saying Tuchel was his best ever coach. I feel the move to Chelsea definitely has some legs.

Xavi is a big fan of the French winger and has asked the club to pursue a deal with the player, but at the time of writing it looks as though that could be difficult to achieve.

Odds for Barcelona to win LaLiga are available at 2.50, second favourites behind reigning champions Real Madrid on 2.20. An each way bet could be a good route, with top four looking almost certain having rescued a second-place finish this season in spite of their early chaos. It would take a real shock to Barcelona end up fighting for a Champions League spot again this campaign, especially if they do secure the signings they’re chasing.

That said, Carlo Ancelotti’s side are favourites with good reason. Their squad was already the strongest in LaLiga and this summer they have only strengthened. With only 0.27 difference between Barcelona and Real Madrid, that doesn’t seem a comfortable enough margin to expect Barça to make the jump and overtake their rivals.

That’s not to say that there isn’t a chance. Real Madrid haven’t won back-to-back titles in Spain since 2006/07 and 2007/08, and in the first instance Los Blancos only got their hands on the trophy thanks to a better head-to-head record against Barcelona after both teams finished on 76 points.

It’s also fair to say that Barcelona have got more depth in key areas. In particular, Barcelona’s attacking ranks look more profound than Real Madrid’s. An injury to Karim Benzema could derail Ancelotti’s season, while Barcelona could have Lewandowski, Pierre-Emerick Aubameyang, Ferran Torres, Ansu Fati and more to fall back on.

Will Barcelona win the Champions League?

At odds of 14, some may start to consider Barcelona as dark horses to win the competition. There won’t be many sides at such long odds with such winning experience in the competition and young potential.

Xavi is clearly looking to add experience, but this squad bizarrely lacks many players at the peak of their powers. Ter Stegen in goal is arguably the only player in that first choice XI who is at a peak age for a footballer, yet even he is struggling.

When it comes to the highest level of fixtures, the energy and intensity of such ties at the business end of the season is unlikely to match the much deeper, and more balanced, squads of Europe’s elite. Gone are the days of MSN and Barcelona most certainly aren’t the same European force which last won the Champions League back in 2015.

It’s worth remembering that last season this same team fell early in the Europa League after crashing out of the Champions League in the group stages. This squad is most certainly stronger, but the Champions League is a long way off and a focus on domestic success may be more likely to yield short-term results.

How will Barcelona fare in the Copa del Rey?

Knocked out in the last 16 by Athletic Club in 2021/22, this season could present the Copa del Rey as a golden opportunity to Barcelona. Xavi has spoken about a winning mentality repeatedly since his arrival in the dugout, and the Culés would take any silverware they could get their hands on.

The Copa del Rey has ended up in Barcelona’s hands in five of the last 10 editions, and continuing that heritage would help to bring back a desire for success that some of this team’s youngsters are yet to taste.

If a title race already looks difficult after the World Cup, Xavi could prioritise the competition and field stronger teams in this competition accordingly. The structure of the tournament means that Barcelona are unlikely to face strong opposition until the last 16 at the earliest, and a cup competition could favour Barça’s less consistent squad.

Could a Barcelona player be LaLiga’s top scorer?

The leading candidate here would have to be Robert Lewandowski. The Polish international has averaged more than a goal per game in the league in each of the last three seasons for Bayern Munich.

He may require some time to adapt to LaLiga, but a born finisher is a predator by nature, and you’d imagine that Xavi would be setting up much of his team’s strategy around getting the best out of the potential marquee signing.

A dark horse could be Pierre-Emerick Aubameyang. The ex-Arsenal striker joined on a free transfer in January and then averaged a goal every 116 minutes. It’s not quite Benzema’s goal every 89 minutes, but for a recent arrival, it’s certainly not bad going.

Ansu Fati would previously have been considered a candidate, but his ongoing injuries, from which he has still not yet fully recovered, will likely impede him. There are mixed reports from Barcelona, but many suggest that he may not be fully fit until after the World Cup in the winter. That would write off his chances of winning the Pichichi.