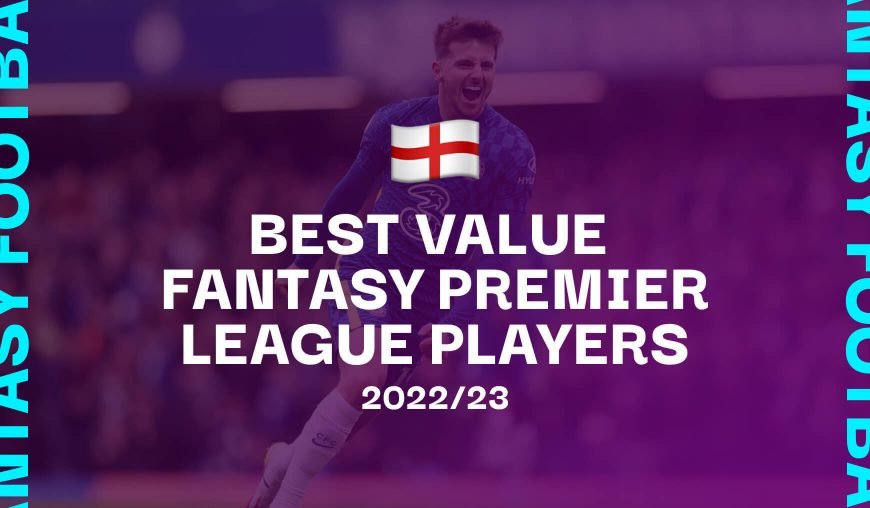 The dawn of the 2022/2023 FPL season is almost upon us. Premier League enthusiasts around the world will be battling it out for bragging rights within their own leagues and fighting for the highest overall rank they can. Picking the right players from the start can be an essential skill that very few managers possess. They can be low owned gems, ‘essential’ picks or budget enablers that help you to balance out the rest of your squad. Regardless, during preseason we always search for the players that offer the best value and below are ten players that do just that.

Eleven goals, eleven assists and 169 points last season firmly put Mount into the ‘talisman’ category when discussing Chelsea assets. Having racked up over 2300 minutes, the Englishman saw plenty of minutes and there isn’t any reason to believe this shouldn’t continue into next season. Kai Havertz looks to be leading the line for Chelsea, to start the season at least, which means goals will need to be scored by other members of the team. Mount has never shied away from this responsibility and has steadily increased his attacking output every season. That first home game against Everton should provide an early opportunity to put some points on the board and after the first three weeks, £8m will seem cheap.

Few imagined what an impact the Swedish winger would have on this Spurs team when he was bought in January. Coinciding with the hiring of Antonio Conte, Kulusevski managed 5 goals and 9 assists in just over 1200 minutes. Stretch that over a full season and he would have been close to thirty attacking returns. His ability to carry the ball forward, and in turn take that responsibility away from Son, meant that Son was able to find his shooting boots and have his best FPL season to date. What’s more important is the way Conte sets his team out to play football. He works them to the bone and gets incredible results out of them, before seeing a slight burn out in year 3 or 4. With this being his second season at Spurs, we could be about to see a fantastic season in North London. Kulu has it all, he can shoot with power and precision, he can move the ball freely, he can see a pass and cross the ball and he’s tall enough to impose himself in the box. At only £8m, he is being seriously overlooked.

Last season was somewhat of a breakthrough season for Arsenal’s Brazilian winger. Hardly featuring at the beginning of the year but then featuring in all the last 24 games, 19 as a starter. He managed six goals and seven assists, while missing out on 100 points by the smallest of margins. While his teammate, Saka, is my preferred Arsenal midfield asset it simply cannot be ignored that Martinelli is £2m cheaper. Just think of what you can do with the money. Smith-Rowe seems to still be struggling for full fitness and this should lead to Martinelli starting the season. The fixtures are a sea of green up to game week eight and he is a perfect player to place into your team and tick over. If you are being bullish about Arsenal’s prospects at the beginning of the season, then a triple up involving Martinelli is essential. A double up with similarly kindly priced forward Jesus (more on him later) is a solid move.

Last season was a season to forget for the popular English winger. He burst onto the scene at Manchester United but has failed to build on his impressive 2019/2020 season in which he scored 17 goals and accumulated eight assists. Manchester United are undertaking their first season under Erik Ten Hag and the fans are optimistic that he can improve their fortunes on the pitch. Rashford has enjoyed a positive pre-season and looks to start the season in a front three with Martial and Sancho. If Rashford can find any sort of form, we know he has the ability to produce multiple attacking returns in those opening two fixtures, but what really raises the eyebrows is his price. At just £6.5m, cheaper than he has ever been in the game, you must consider him in your team. It may be a stretch to trust United again but, at that price, it could be a risk worth taking.

The English midfield stalwart is the ultimate season player. Pick him in your team in game week one and do not transfer him out. He will play every game when fit, he will tick along with assists and free kick goals, and he is a potential bargain at £6.5m. He achieved ten goals and five assists last year on his way to accumulating 159 points. The fixtures to start the season aren’t particularly friendly but players who are on set pieces can be trusted in tricky games, due to their managers targeting set plays to attack the opposition. James Ward-Prowse is the opposite pick to Rashford. He isn’t flashy and carries very little risk so is perfect to help fill out your squad. Watch his brace against Brighton last year to show you just how dangerous he can be in any given week.

FPL managers will always be looking for opportunities to fill out their teams with as many players as possible from the best teams in the league. When you are gifted with the chance to acquire a midfielder from Manchester City, who had the highest xA per 90 for midfielders last season, it’s worth sitting up and paying attention. Grealish suffered a mixed season last year as he took his time to adapt to Pep’s system. Now he enters his second year, there is a buzz about his potential. Guardiola is well known for his tendencies to let players ‘bed in’ in their first season and then unleash them in their second year. We all know the English winger can take the Premier League by storm and, with the arrival of Haaland, could finally have the target man to help unlock his obvious potential. Haaland will occupy defenders, which leaves space for Grealish to attack the edge of the box. With Manchester City’s opening fixtures and Grealish’s price set at £7m, he could be the bargain of the season.

The biggest indicator that Arsenal’s new front man is such good value this year is his ownership. At the time of writing, Jesus is currently owned by over 70% of FPL managers. This shows that he is priced as a backup option for Manchester City and not as a starting striker for a team fighting for a top four finish. Coupled with Arsenal’s incredibly kind fixtures up to game week eight, it leaves the Brazilian forward as a very popular pick. Current ownership aside, he is still a fantastic pick for the season. Arteta had Arsenal firing at various points last season and Jesus will have a constant supply of ammunition behind him to help keep him firing. Odegaard, Martinelli, Saka and Smith-Rowe (when fit) are all more than capable of creating chances and they will be thrilled to have a focal point to aim at. There are question marks over his ability to lead the line effectively, having played right wing for Man City before he left but, at his price, you must take the gamble.

Strikers were a fantasy wasteland last year and many FPL managers gave up on the idea of owning them, resorting to playing only one for much of the season. In that desert of forwards, one man attempted to provide an oasis. That man was Ivan Toney. His 12 goals and five assists helped to earn him 139 points last season and, considering this was his first season in the Premier League with Brentford, should not be sniffed at. Toney has it all as a forward and there is no reason to believe he can’t continue his attacking output into the new season. The fixtures for Brentford are the second easiest in the league for the first six weeks and if the London club are to score goals, you can be sure that Toney will be involved. The loss of Eriksen is a blow but the club have worked hard to replace his creativity in their midfield and Toney is always capable of stepping up and taking a penalty to alleviate any worries about his floor.

Ivan Perisic arrives at Tottenham having already played under manager Antonio Conte while he was at Inter Milan. The current Spurs manager knows exactly what he is getting with the Croatian wingback (industry and creativity) and you can see where he will fit into his side. Spurs have been crying out for a more reliable left wing back that can attack and defend in equal measure and Perisic will give them that in spades. The interest in him for FPL purposes arrives from the fact that he has often operated as a left midfielder or left winger and managers were incredibly happy when he was classified as a defender in the game. With the potential to get clean sheet points, as well as assists, it leads us to believe that he could thrive for a price of only £5.5m. When coupled with the ever-reliable Harry Kane in your teams, you could be looking at a dangerous double up of Spurs assets that have a delectable fixture against Southampton in game week one.

For many, Newcastle’s signing of Trippier showed them that the newly bought out Tyneside team meant business. A player who had been plying his trade in La Liga with Atletico Madrid and scoring free kicks for England in World cups, had made his way back to the Premier League to play for the Magpies. He showed from the off that he still had that eye for goal from a set piece and this helps raise his potential floor points each week. He suffered from injury last season which kept him out for much of the season, but he did come back towards the end to remind us of what we were missing. Newcastle have a kind fixture in game week one against Nottingham Forest and home games were a good source of clean sheets for the Magpies last season. Trippier is, arguably, the best £5m in the game this season and shouldn’t be ignored. His fixtures from game week six to ten will lead to some heavy investment.