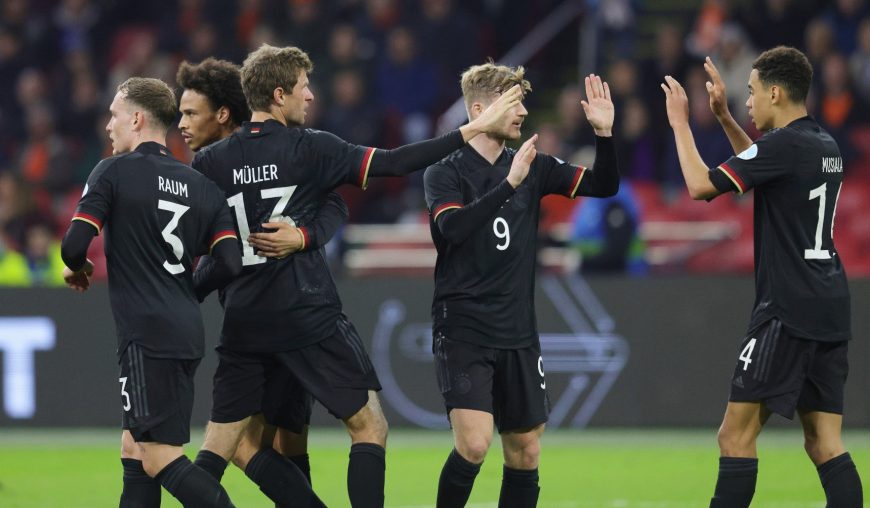 The domestic season may have come to a close, but a handful of UEFA Nations League match days are approaching in a quickfire state, meaning there are still bet builder predictions to keep us occupied, with Italy taking on Germany on Saturday night to kick this version of the competition off for both sides.

In case just like me, the Nations League has slipped your mind, I’ve got a brief refresher for you. Italy and Germany have been placed in a group with England and Hungary, who are all part of the highest seeded teams. Once all teams have each other played home and away, the winner of the group will proceed to a knockout phase to lead to the final in 2023.

With Italy being ranked 6th in the world by FIFA, and Germany ranked 12th, this doesn’t quite reflect recent performances. Italy have gone through a recent journey of misery as they failed to qualify for the 2022 World Cup, despite their recent EURO 2020 victory. Adding to the fact that Italy also failed to qualify for the 2018 World Cup, this won’t bode well, as the Azzurri are continuously missing out on being on the world’s greatest stage. Compounding on recent failure, Italy succumbed to a 3-0 defeat to Argentina earlier in the week to lose out on the Finalissima trophy, a showpiece that was hosted at Wembley Stadium.

With Chiellini waving goodbye to international duty and pressure falling on to manager Roberto Mancini, Italy are going through a period of poor fortune. With both sides having to play four games in eleven days to accommodate the fixtures of the Nations League, demand will be high on the players before Germany and Italy face each other in the reverse fixture on 14th June. With Germany topping their World Cup Qualification group, this is an opposite to Italy’s recent experiences, which could lead to an interesting match.

With Germany unbeaten in their last four games against Italy, they will be looking to extend that run in both sides’ inaugural game for this edition of the Nations League. Have a look at my bet builder predictions below, as well as the Cheat Sheet, before the summer break truly begins.

With Italy not reaching the World Cup, producing poor performances and being humiliated by Argentina in the week, it seems that Germany are provided with a great opportunity to get their Nations League campaign off to a perfect start, a competition that they aim to win.

Since Germany dropped out of the EUROs at the hands of England, new coach Hansi Flick has started steering the Germans in the right direction. Germany have gone nine straight games unbeaten since EUROs failure, which has included eight wins and one draw. Comfortably topping their World Cup qualification group, it sets them in an ideal position for Qatar in the winter, as a team with growing confidence will be able to challenge amongst the top-ranked FIFA teams.

With a flock of young talent coming through with the likes of Musiala impressing, this combines well with the seasoned talent of the likes of Muller, Kimmich and more, combining to produce a promising squad. This has enabled Germany to display a run of extremely convincing results, which has included them scoring four goals or more in five of their last nine games, showing dominance over their opponents.

These are good reasons to instil fear in an Italy side that are low on confidence, momentum and have just sent a flurry of experienced players home after the Finalissima defeat. This presents Germany with a promising opportunity to pick up a victory, as their dominating run since the EUROs suggests that they are becoming one of the international sides to be feared the most. With Italy coach Roberto Mancini focusing on rebuilding his Italian squad, this transitional period can enable Germany to have an easier game against Italy than initially feared, as Die Mannschaft are in a period of producing convincing performances.

Because I’m expecting Germany to get the better of their Italian hosts in this Nations League fixture, Timo Werner is the man I’m expecting to get on to the scoresheet, as his form for Germany is certainly something to be impressed by.

Despite having an up-and-down season at Chelsea, Werner has had good periods of form. However, when he is required for international duty, Werner has had a knack for scoring in the majority of games after the misery of EURO 2020. Werner has found the back of the net six times in his last seven international games. This shows that Werner is clearly comfortable in a Germany shirt, enjoying his football and producing good performances for his country. Possibly aided by his clubmate Kai Havertz, Werner slots nicely into this Germany side, being a real threat on goal and causing issues for his opponents.

Werner has only missed out on two games since the EUROs, which was due to injury. This reinforces how much Hansi Flick depends on Werner, as he is becoming a solid feature of this Germany side. With Italy letting Argentina hit them for three during the week and Chielleni saying arrivederci to his team, this can reduce the confidence of the Italians, allowing Werner to stroll on in and maximise chances provided to him.

Looking back at Germany’s World Cup Qualification campaign, their 2022 fixtures saw Werner have 2.49 shots on target per match, highlighting how involved he makes himself in recent fixtures. His impressive involvement builds the trust that his teammates have in him, as he converts most chances that head his way. Averaging 0.96 goals per 90 minutes in the qualifiers in 2022, Werner’s strong international form is why I’m expecting him to find the net against Italy.

Italy to Receive the Most Cards

Throughout my bet builder predictions, I’ve not kept it quiet that I believe that Italy will struggle. Their poor form, squad rebuild and recent disappointment are just a small collection of reasons why I think they will struggle against a high-flying German side. Because of this, I’m expecting desperation, frustration and a hint of inexperience to get the better of them, meaning that they will pick up more cards than their opponents.

Looking back into the near past, I’ve mentioned that Italy fell at the hands of Argentina in the Finalissima game. During that match, Italy picked up three yellow cards, which was reflective of their disappointing performance. The consequences of being outplayed allowed Italy to show their frustration. All three players that were booked were all retained in the squad for their Nations League fixtures, meaning that these were crucial players that picked up a caution.

With the referee in charge of their fixture with Germany producing an average of 5.06 yellow cards in the season just gone, this outlines how easily the referee can distribute bookings to players. If Germany start outperforming their opponents fairly swiftly, the recklessness from Italy may settle in from an early stage, allowing a large portion of the match seeing the Italian players avoiding punishment from the referee, as reckless fouls may start to be made. With patience not being an attribute of the referee in charge, bookings could be distributed easily, with Italy most likely picking up the majority due to their diminishing chances of success in this fixture.

With Verratti, Jorginho and Insigne being part of the collection of players that were sent home by Mancini, this only promotes the amount of struggle that the remaining Italian players could face. Not having some of their star players can impact them heavily, which can lead to them being on the back foot in this fixture. Because of this, desperation and struggle surely equals cards.

Prediction: Italy to Receive the Most Cards

Back the 10/1 Italy v Germany Bet Builder below ⬇️

Sign up to Paddy Power and get a full refund if your first bet loses. Grab an account through the offer below and place £30 on the 10/1 Italy v Germany Bet Builder. Here are the two possible outcomes:

How to watch Italy v Germany in the UEFA Nations League