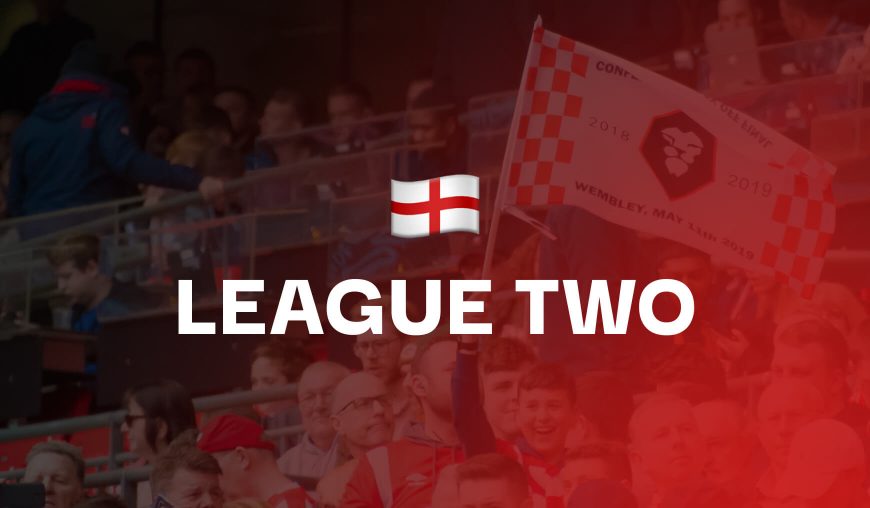 Having been top of the table since mid-September, Forest Green Rovers lost their place at the summit last weekend with a 3-1 home defeat to Harrogate Town, an indictment of their bottom half record in the last third of this season. From a position of potentially breaking fourth-tier records, the Green Devils now find themselves with the league title out of their hands.

Fifth place Mansfield Town require a point to secure a play-off spot, and could still potentially take the final automatic place if they pick up three points whilst both Northampton Town and Bristol Rovers lose.

Earning third feels an unlikely scenario with Bristol Rovers hosting bottom club Scunthorpe United, but Mansfield earning a final day victory over the former League leaders is certainly a possibility. This is a team with League Two’s joint-second-best home record, who have won all but two of their last 16 matches at Field Mill, against a team who once looked like the league’s best side, but certainly don’t anymore. Forest Green ultimately have promotion already clinched. The league title at this stage is just a bonus if they truly desire it.

It could well be a nervy affair for the Cobblers up in Cumbria. Occupying that final automatic spot ahead of Bristol Rovers by just goal difference, Northampton know that even a 1-0 win would leave fans checking their phones to make sure that the Gas having racked up the goals at the Memorial Stadium against Scunthorpe United.

With a league high total of 21 clean sheets, Northampton Town’s defensive base has been a key part of their promotion challenge. The centre-back partnership of Jon Guthrie and Fraser Horsfall have been influential in both penalty boxes, contributing a combined 16 league goals from set piece situations.

Barrow have not been a pushover at Holker Street since before securing safety for another season, with everything riding on this game for the Cobblers, a single-goal match or shutout for the visitors feels a possibility. Northampton’s dream scenario will be finding out early on that Bristol Rovers are behind and out of it. That feels unlikely though, and this weekend at Holker Street could well be a tense one right up to the final whistle.

Fans of Sutton United could be excused for thinking that life in the EFL is easier than it actually is. On the verge of completing their debut campaign as a Football League side, the Amber and Chocolates are able to look back on a season which has seen them flirt with both the play-off and automatic promotion spaces, as well as head to Wembley for hard-fought EFL Trophy Final.

Though out of their hands, a play-off place finish is still a possibility for Sutton United, and Matt Gray’s side may have a keen eye on Port Vale’s result at Exeter City if they can pick up three points in West Yorkshire.

They picked up a 3-1 win at promoted Forest Green Rovers last weekend, but Harrogate Town have had poor overall form across the second half of this season, particularly against play-off and promotion sides in the position that Sutton United find themselves in.

The EFL debutants could still yet have post-season football in their schedule and will fancy their chances of securing three points against a Harrogate team who they beat at Gander Green Lane back in January. From there, it may well need to be a case of getting the phones out and seeing what’s going on elsewhere…

Exeter City find themselves in prime position for the League Two title after last weekend. Match the outcome of Forest Green Rovers away at Mansfield Town, and it will be there’s. Hypothetically, Exeter could lose this weekend and still wrap up the league given their current one-point advantage at the top.

Port Vale find themselves in an uncomfortable situation where they could potentially clinch automatic promotion, should they beat Exeter, Mansfield fail to win, and both Northampton and Bristol Rovers, or alternatively end up out of the top seven places altogether.

Context could well have a major impact in how this game goes. Exeter may well put their foot either on or off the gas depending on what the scoreline is between Mansfield Town and Forest Green Rovers. Port Vale likewise may well relax if automatic promotion becomes out of reach and it becomes apparent that the teams below will not be able to overtake them.

Chances are that this game could find goals early on with the forward quality that both sides possess, and exactly who emerges victorious could well depend on what’s happening elsewhere…

Behind third-place Northampton Town on just goal difference, the difference for Bristol Rovers between play-offs and automatic promotion could come down to how heavily they can beat the league’s bottom club.

The Gas will find themselves needing to win by at least six goals should Northampton overcome Barrow, and that is no easy task even against lowly Scunthorpe United. The Iron have shipped a league-high 83 goals this season, conceding six in a game on just one occasion at Harrogate Town back in October, though that game ended 6-1. Scunthorpe have been beaten by four-goal and five-goal margins across this season, but not by a margin that Bristol Rovers may require this weekend.

Should the situation call for it, the Gas can take confidence from having one of the most in-form frontlines in the division. The January loan signing of winger Elliott Anderson from Newcastle United has been one of the most influential across the entire EFL. Striker Aaron Collins comes into this game on the back of a hat-trick against Rochdale, with Sam Finley, Antony Evans and Harry Anderson all capable of contributing from midfield. Even with the red card to deeper-midfield Paul Coutts, Joey Barton’s side should be able to utilise Glenn Whelan comfortably in his role for this final day fixture.

Bristol Rovers certainly have it in them to not only beat Scunthorpe United but beat them by a notable margin. A win for them coupled with anything other than victory for Northampton Town and that third automatic spot. Should the Cobblers win at Barrow, Joey Barton’s side will really need to turn on the style at the Memorial Stadium.

A lot needs to happen for Swindon Town to earn the final automatic promotion spot, but it is a fun scenario to play out in your head. To finish third, Swindon would need to win at Walsall, see Port Vale fail to beat Exeter, Mansfield fail to beat Forest Green, Bristol Rovers lose to Scunthorpe and Northampton to lose at Barrow.

It’s a lot more realistic to feel that Swindon Town will be targeting three points at Walsall in order to secure a place in the play-offs, and on the back of four wins in five and two consecutive away wins by a three-goal margin, the Robins have a reason to feel confidence.

The return of ‘box office’ forward Harry McKirdy to the line-up has reignited Swindon’s goalscoring touch. The 25-year-old has 27 goal involvements across the season. Striker Josh Davison, on loan from Charlton Athletic since January, has 11 goal involvements, and the current frontline is complete with Aston Villa loanee Louie Barry, who himself has seven.

With a free-flowing frontline and quality midfield service provided by Jack Payne, Jonny Williams and Louis Reed, Swindon Town will head into the final day with the target of earning three points comfortably and then seeing how that affects their position in the table come full-time. The chance to finish the campaign as the league’s top scoring team (they currently lead the way on 74 with Forest Green Rovers one behind on 73) is bound to be seen as an opportunity to boost their confidence ahead of a potential play-off campaign as well. This team loves scoring on the road.

Requiring a win at Leyton Orient to even have a chance of a play-off finish, the odds are stacked against Tranmere for securing post-season football, but that doesn’t mean they can’t at least take advantage of what it is in their own hands.

Build around the solid, consistent spine of Calum MacDonald, Tom Davies, Peter Clarke and Josh Dacres-Cogley, Tranmere have earned 20 clean sheets from their 45 league games, second only to Northampton Town who have 21.

That solid base has allowed goals to come from the midfield and frontline, albeit a smaller number overall when compared to the other play-off hopefuls. The Rovers front pair consists of fan favourite Elliott Nevitt, a forward picked up from Non-League Warrington Rylands 1906, and the much more experienced Kane Hemmings, who already has seven goals and seven assists since signing from Burton Albion in January. Everton loanee Lewis Warrington has proven key to providing that link between the midfield and the frontline, with goal contributions also coming recently from out Josh Hawkes and Rangers Josh McPake out wide.

A run seven wins in their last 10 games is giving Leyton Orient fans deserved confidence ahead of a full season under Richie Wellens next year, but with Tranmere being the ones having something tangible to play for here, the Super White Army could take advantage at Brisbane Road if they realise the opportunity of a play-off place is there in front of them.

Sign up to Betfair and get a full refund if your first bet loses. Grab an account through the offer below and place £20 on the 55/1 League Two Best Bets Accumulator. Here are the two possible outcomes: