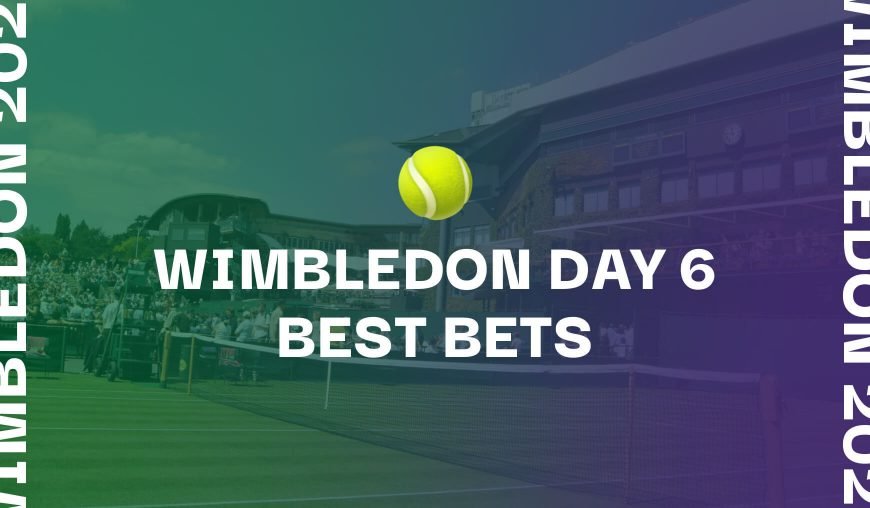 Action starts from 11am

Kyrgios’ performance against Filip Krajinovic on Thursday was eye-opening and one which suggested he may finally be able to challenge for the Wimbledon title.

Much was said about Kyrgios’ ability after he beat Rafael Nadal on his Wimbledon debut back in 2014 but it’s fair to say he’s failed to deliver on his promise.

Still, we all know the talent is there – if the body and mind hold up – and he looks a decent price to continue his bid in this one.

His service-hold percentage on grass this year is back above 95% after he went unbroken against Krajinovic, while his breaks-of-serve figures have also been on the rise, the return having always been a problem area for the Australian.

Tsitsipas has finally managed to put a run together on grass – he won his first title on the surface in Mallorca last week – but his data is not at the same level.

It’s also important to note their pair’s head-to-head record which has Kyrgios 3-1 ahead, Tsitsipas’ only win coming in the Laver Cup, the competitiveness of which can be open to question.

Crucially, one of those wins came only a couple of weeks ago in Halle where Kyrgios reached the semi-finals before losing to eventual champion Hubert Hurkacz.

Getting 4/6 about a Kyrgios win looks decent – as long as you are prepared to deal with the possibility that the Aussie firebrand manages to keep his head strong, something that’s been a problem too often in the past.

Iga Swiatek is presently on the longest women’s winning streak of the 21st century, having won her last 37 matches, and should she overcome Alize Cornet in a third-round encounter on Saturday, her run of success will be the best since Steffi Graph was 66 in-a-row in 1989-90.

This will be her first time up against Cornet, and the 32-year-old Frenchwoman should prove a significant test for Swiatek – certainly better than her odds of 5.0 might suggest.

The World No.1 has yet to face an opponent of any note on grass this year. She did not play in any of the warm-up events after winning the French Open, and though she blew away Jana Fett, who is now outside the top 250 in the world, she struggled against lucky loser Lesley Pattinama Kerkhove, the World No.138, winning in three sets.

“The grass is pretty tricky for me. I guess you can see that I’m not playing as efficiently as on other surfaces,” Swiatek subsequently admitted.

Cornet, meanwhile, is an opponent in good touch. She made her Grand Slam breakthrough in January when she reached the quarter-finals of the Australian Open and backed that up with a decent run to the third round of the French – her best run on the Paris dirt since 2017.

She has form on grass this year, too. She reached the semis at Bad Homburg before losing to in-form compatriot Caroline Garcia but did overcome World No.18 Angelique Kerber – a strong player on grass – along the way.

Having already defeated No.27 seed Yulia Putintseva in straight sets, she has the capacity to run Swiatek close and perhaps even cause a major upset. Cornet is worth backing on the handicap market.

Nakashima was impressive in taking out last year’s semi-finalist Denis Shapovalov in the last round and I don’t envisage Galan causing too many problems in this match-up.

The Colombian only progressed to this stage due to Roberto Bautista Agut’s brush with COVID-19 and while he did manage to see off Dominik Koepfer in round one, this represents a step up in class.

Nakashima has only been broken twice in the eight sets he’s played so far at the All England Club and seems to be putting a disappointing start to the season behind him.

The pair have never met before so you can’t be sure how Galan will react to Nakashima’s game but his court coverage is good and he’s strong off both his favoured backhand side and the forehand.

With confidence flowing right now, I’d expect a comfortable win for the favourite with around even money about the straight-sets success looking fine.

Both Harmony Tan and Katie Boulter are into the third round after causing major upsets already this week. Frenchwoman Tan shocked Serena Williams over three sets and then ousted No.32 seed Sara Sorribes Tormo while home favourite Boulter backed up her victory over Karolina Pliskova in Eastbourne by repeating the feat in stunning fashion.

Tan deserves the plaudits for showing supreme mental strength to overcome perhaps the greatest woman ever to pick up a tennis racquet, in truth Williams looked well short of tournament readiness, having not played singles for a year. The victory over Sorribes Tormo deserves respect but the Spaniard has no record worth speaking about in majors and certainly not on grass.

Pliskova, on the other hand, is a different beast altogether and Boulter’s three-set victory was highly impressive.

The Brit, meanwhile, has been posting some superb results on grass all season. Beyond her two wins over Pliskova, she has also beaten Caroline Garcia, top 100 player Tereza Martincova and a hugely accomplished grass court player in the form of Alison Riske. An opponent outside the Top 100 of the WTA Ranking should prove well within her radar for this encounter.

Prior to Wimbledon, Boulter spoke extensively about her good form reflecting her happy personal life, but perhaps the greatest danger the wildcard faces against an opponent ranked three spots higher than her comes from emotional drain – she lost her grandmother two days before she overcame Pliskova. Nonetheless, the 25-year-old is good value here in the first meeting between the pair.

The form of Molcan over the past couple of weeks has been noted and he may be able to make this competitive.

He beat Miomir Kecmanovic in Mallorca last week where he also won a set 6-0 against Tallon Griekspoor before eventually losing that match 7-6 in the third.

At Wimbledon, his straight-sets dismissal of Marcos Giron in the last round was a good win and he was only broken once in that contest.

He’ll need to serve well to stand a chance against Fritz, considered a dark horse for the title in some quarters.

The American has got that big serve which has carried the likes of Kevin Anderson and Matteo Berrettini to the final here in recent years but wasn’t at his best in the last round against Briton Alastair Gray, losing his delivery twice.

It’s hard to criticise a straight-sets win too much but Molcan does look a potentially-awkward test.

Fritz’s record against left-handers is three percentage points lowly than against all-comers with such opponents doubtless targeting his backhand.

It’s far from a weak shot but he can’t be as aggressive with it and that is an area where Molcan could have some success.

OK, I do see the potential for this bet to go wrong but, all things considered, I think over 37.5 games is worth backing.

Former champion Halep is understandably a strong favourite in this one but a price of 1/12 looks rather short.

Frech has posted two straight-sets wins so far, including one over a decent grasscourt player in Camila Giorgi.

She was also only a few points away from beating the in-from Beatriz Haddad-Maia in Birmingham a couple of weeks ago, losing that one 7-6 in the final set.

Halep’s short price in the win market means that when it comes to the handicap lines, Frech is getting a big start and that’s of interest.

She covered a 6.5-game line when the pair met at this year’s Australian Open, going down 6-4 6-3 on a day which saw her break the Halep serve four times which is encouraging ahead of this rematch.

Halep ‘only’ beat Kirsten Flipkens 7-5 6-4 last time out and something similar her would be more than enough for the bet to land.

An improbable Grand Slam remains on for Rafael Nadal, who is into the third round of Wimbledon after winning both the Australian and French Open. Standing in his way is No.27 seed Lorenzo Sonego, who reached the fourth round at the All England club last summer for the first time.

Nadal is understandably a strong favourite to win this encounter, which will be the first between the pair. Rafa, after all, possesses a career winning record of greater than 80% at Wimbledon and has won the competition twice – last back in 2010.

But the Spaniard may be stretched by his Italian opponent. Firstly, he has not been a dominant force since switching to grass from the clay. A foot injury prevented him playing any competitive warm up tournaments and the two matches he has played thus far have both gone to four sets. These have followed a pattern of Nadal winning the opening two, dropping the third before coming good in the fourth. Neither victory has been achieved with quite the degree of comfort that might have been expected.

Sonego, meanwhile, is an opponent to be respected. His grass court record this summer reads five wins to three defeats, but two of those losses came against Matteo Berretini and Alex de Minaur and only one came in straight sets. He has already overcome two Top 75 players at Wimbledon this summer and was competitive last year in a three-set loss to Roger Federer.

Nadal should prove too strong for the Italian in this encounter, but there is value in backing the No.27 seed to pinch a set.

Sign up to Paddy Power and get a full refund if your first bet loses. Grab an account through the offer below and place up to £30 on any of the Day Six Wimbledon Best Bets. Here are the possible outcomes:

How to watch Wimbledon?