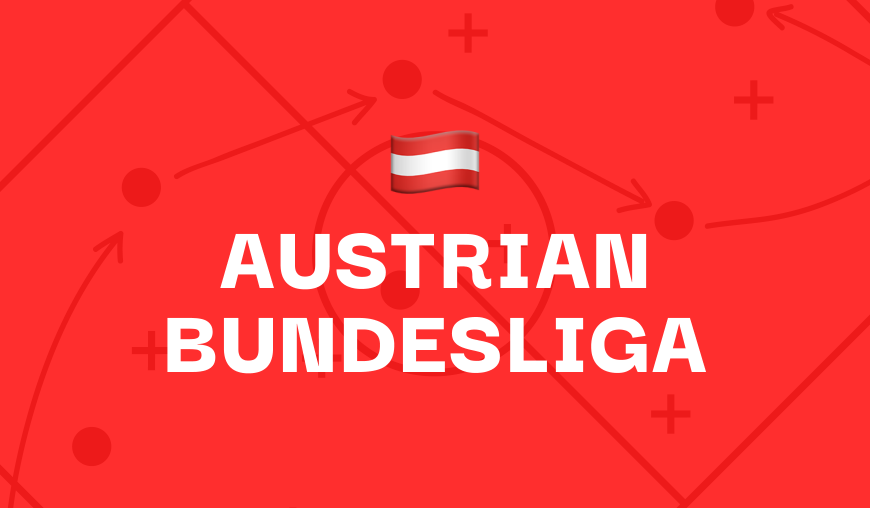 The Austrian Bundesliga returns from a mammoth 61-day winter break with a blockbuster clash on Friday night as record champions Rapid Vienna play host to title-holders Red Bull Salzburg. With crowds capped at 2,000 until the following day, the Green & Whites requested to have the game moved back – only for the Red Bulls to argue it would hinder their Champions League last-16 preparations and rebuff the move.

Rapid, fresh from their disappointing Austrian Cup quarter-final elimination at the hands of tiny Hartberg, will be without a raft of players including ill forward Taxi Fountas and his strike partner Ercan Kara, who was sold to MLS side Orlando City over the winter break: the duo have scored 16 of Rapid’s 27 league goals this season between them. Salzburg have an equally long injury list and are likely to be missing star performer Karim Adeyemi, the division’s top scorer with 14 goals.

That, though, did not stop Matthias Jaissle’s men from breezing through to an 11th consecutive cup semi-final last weekend and they will travel to the Allianz Arena in confident mood: they are unbeaten in their last nine league clashes with the capital club (W8 D1) and have scored more than once in each of those eight wins. Rapid, for their part, have not lost the opening league game of a calendar year since 2014 (W6 D2) – but that is likely to count for very little against the might of Salzburg. With that mind, it’s worth backing the Red Bulls to take maximum points and score over 1.5 goals in the process.

Wolfsberg, the only club in the Bundesliga not to make a signing in the winter transfer window, could be without up to four first-team regulars – including first-choice goalkeeper Alexander Kofler – following a coronavirus outbreak last week. Ried, for their part, are without top scorer Seifedin Chabbi (six goals), who recently underwent surgery on an injured elbow.

Having secured back-to-back third-place finishes in 2019 and 2020 – record placements for the Carinthian club – the high-flying Wolves find themselves in third once again this term and only behind second-placed Sturm Graz by virtue of their inferior head-to-head record. Sixth-placed Ried, meanwhile, were only promoted ahead of the 2020/21 season but are already establishing themselves in the top tier: they have surpassed expectations this season and are on course for a place in the top half when the league splits in March.

Both teams will go into this match on a high, having seen off Floridsdorfer AC and Austria Klagenfurt respectively to reach the Austrian cup semi-finals at the weekend. But it is Wolfsberg who will be the favourites for this clash: they are currently eight games unbeaten against Ried (W5 D3) – their joint-longest top-flight unbeaten streak against a single opponent – and have only conceded more than one goal twice in their last nine league outings. That all makes backing Wolfsberg to win this one a fairly solid bet.

Sturm Graz looked to be Salzburg’s closest challengers in the early part of the season but subsequently fell off the pace following an inconsistent run of results and are now 14 points behind the Red Bulls. If mid-season is anything to go by, a catch-up mission is not on the cards either: the men from Graz lost four of their five friendlies against lower-quality opposition from Croatia, Hungary and Slovenia over the winter break.

They suffered a hammer blow a month ago as well as forward Kelvin Yeboah, their top scorer this season and the second-highest scorer in the division overall with 11 goals, was prised away by Italian Serie A side Genoa. That will come as a relief to WSG Tirol: Yeboah joined Sturm from the Tyrolean outfit and had made it something of a habit to score against his former employers.

In terms of personnel, Sturm are still without important midfielders Otar Kiteishvili and Stefan Hierländer, who have been big absences in recent months. WSG will be reliant on the goals of on-loan top scorer Giocamo Vrioni, who has found the net nine times this term and has scored in every league win since the start of October.

Although the Grazers are unbeaten in their seven league meetings with the Tyroleans (W6 D1), their recent form and loss of Yeboah probably makes both teams to score a safer bet. That has happened in all three of the previous meetings between these two teams in Tyrol.

This is a meeting between two teams in the bottom half of the table with very different goals: while Austria Vienna currently occupies seventh spot and have four games to go to make up the three-point gap to Ried and qualify for the top six, Altach are rooted to the bottom of the table and will be desperate for a result that would aid them in their battle for Bundesliga survival.

Altach are more or less at full-strength, with only veteran 36-year-old midfielder Philipp Netzer and incoming goalkeeper Christoph Riegler sidelined by injury. But the situation is considerably worse at Austria Vienna, whose absentee list includes a number of key attacking players: top scorer Marco Djuricin (six goals) plus the creative duo of Dominik Fisk and Muharem Huskovic are all injured – a major blow for the Violets.

The men from Vorarlberg have lost only one of their last 10 home games against the capital club (W6 D3) but, given their miserable form this season, the feeling is that this one could go either way. Whatever happens, there are unlikely to be many goals. Austria Vienna’s aforementioned injury woes in the attacking department combined with Altach’s terrible record going forward – 10 goals scored all season, the lowest tally in the division by a distance – meaning that fewer than 2.5 goals in this game would not be a huge surprise.

Sign up to Betfair and get a full refund if your first bet loses. Grab an account through the offer below and place £20 on the 3/1 Austrian Bundesliga Best Bets Treble. Here are the two possible outcomes: