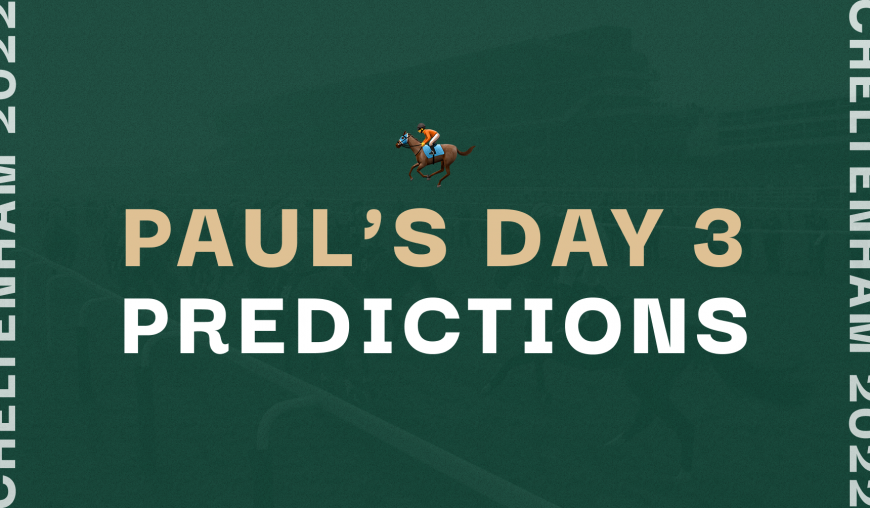 What a clash this will be. Two of the most exciting novice chasers in GB and Ireland going toe to toe. Both won at last year’s festival but in vastly different grades of race. Galopin Des Champs won a handicap off a mark of 142, while Bob Olinger won a hot Grade 1 making the smart Bravemansgame look very ordinary. I have to say that it is the memory of what Bob Olinger did last year that has him as my pick. He hasn’t been a natural over fences in his two chase starts to date, jumping very novicey and green on debut in Gowran, before being a bit cautious over his jumps last time out. Henry De Bromhead has a reputation for being the best at ironing out jumping errors.  I’m putting my faith in him doing so again here, that along with the memory of the brilliant display Bob Olinger put in at last year’s festival are the reasons why he gets my vote.

A hard race as usual to pick the winner of. I’m going for the Gordan Elliot trained Dunboyne. He is an unexposed 7 year old, who is learning all the time. He put in a career best two starts ago while shaping like there was still more to come. He made an error two out from home last time and lost his position turning for home before being hampered entering the straight. I’m happy to forgive his last run and back him based on the promise he showed two starts ago.

Third Wind was a good 4th in this race off the same mark two years ago. The New Hurdles course suits his rear running style and hopefully with such a big field they will go an honest gallop. He’s much better than he showed the last day, where he pulled his chance away. That is a concern here, as in this stiff 3 mile test he will need to save every bit of energy. At a big price he is worth taking a chance that he will be on his best behaviour, he is down to a workable mark.

Allaho sticks out as the best chaser in training for me. Since being dropped to middle distance trips he has taken his form to a very high level. Using his high cruising speed from the front to burn rivals off, is a sight to behold and I expect him to deliver the goods again here. He’s not much of a price so much like Sir Gerhard he is best utilized in multies you’re doing for the week. He will be a near impossible nut to crack.

Saint Calvados is a smarter horse than this season’s form suggests. He ran a cracker in the King George on stable debut, where in my view his jockey got his tactics all wrong, making a sweeping move to the front, at a very hot part of the race before fading into 4th late on. I was impressed with his attitude that day in holding on for 4th. He didn’t act on heavy ground when pulling up last time out (also reported to have bled). He was good 2nd in this 2 years ago to boot, and if bouncing back to his best he rates a good E/W bet. It has been the theme of the festival, but this is another good race to play E/W. If the betting W/O market is available to you and the 9 runners stand their ground then Saint Calvados W/O the fav E/W is a good bet too.

I’m finding it tricky to land on one. I don’t like Flooring Porter as favourite due to his tricky nature, he is one I can see getting wound up in the prelims, damaging his chances before the race even starts. I have similar concerns with Champ. Paisley Park showed some of his old spark when winning last time out, but he’s 10 now and has his physical problem. It’s not guaranteed he will be at his best here. Klassical Dream is another one who isn’t straight forward. So I’m left with Thyme Hill at the top of the market and he will do for me. He was an unlucky 4th in the Albert Bartlett at this Festival 2 years ago. He is a Grade 1 winner in open company to boot. He was 2nd behind Champ last time out but is more reliable than him and rates as a decent bet, out of the process of elimination as much as anything.

Royal Kahala has to find a bit of form. She is on the up though, only a 7 year old and unexposed at this trip. The softer the better for her so the forecast rain is welcome for her chances. If the rain does come and she continues her progression she has a chance of hitting the frame. Being straight forward she will give herself a chance of beating her best form while the opposite is said for a large number of the runners ahead of her in the betting.

Fusil Raffles goes well around here, which isn’t a surprise as his front running tactics are suited by the new chase course at Cheltenham. He was a well beaten 5th last time out. That was over a stamina laden 3 miles where jumping errors cost him valuable momentum in a race where they crawled home. Back down to a well-run 2 and 1/2 miles while being prominent will suit him and he is racing off of a mark that he is capable of winning off.

Stolen Silver is a good E/W bet. He only has 4 chase starts, the best of which came here when second off of a mark of 140. He races off of 144 today but is open to improvement and I’m hoping the return to here will bring out that improvement. He ran a very strange race the last day where he was lazy in the middle part of the race, before picking up late on. The Festival atmosphere should sharpen him up and if doing so he has the scope to run very well here.

Dinoblue put in the best time when winning her only start to date making her a worthy favourite here. She was well backed that day which I take as a positive. Given she only has 1 run she is open to the most improvement and I think she will take plenty of beating here.

Nurse Susan was 2nd behind Love Envoi last time out at Lingfield. I fancy her to reverse the form with that rival here, due to the stiffer finish at Cheltenham looking sure to suit. I make her a good E/W bet here, her form is only a few lb below a lot of what the opposition ahead of her in the betting has achieved. Considering Nurse Susan is less exposed then a lot of those too, she looks underestimated in the betting.

Omar Maretti is an 8 year old but has only 5 starts to his name, winning 4 of those. He has been largely contesting small runner fields in his short career. He showed guts to win last time out in a race where they all went too hard,  he gamely kept going after hitting the front plenty early, thus suggesting he has the stomach for this test. He is up 5 lb for that win and this is a much deeper race, but he is worth supporting at double digit odds in his bid to land the hattrick.

Another option for this Challenge Cup is Mister Coffey who has a good British amateur booked in Sam Wahley Cohan. He is a horse connections think plenty of. He is back down in grade and looks to have a chance here off of a mark of 137. He is often ridden prominently, and I hope that is the case again here.

Sign up to Paddy Power and get a full refund if your first bet loses. Grab an account through the offer below and place up to £30 on any horse on Day 3 of the Cheltenham Festival. Here are the possible outcomes if you if you back any horse on Day 3:

How to watch Day 3 of the Cheltenham Festival