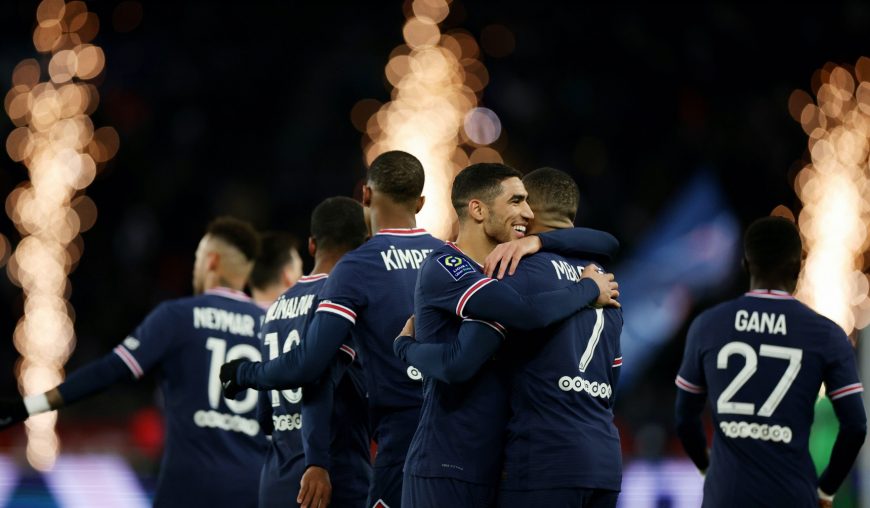 This weekend’s Ligue 1 action comes to a close on Sunday evening as PSG host Marseille, which is a clash that sees the top two sides in the league come up against each other. With both teams on a run of impressive form, the gap between them suggests that it would be an impossible task for Marseille to have a good chance at winning the league this season.

PSG have shown Ligue 1 their world-class ability that they have possessed in recent seasons, as they have produced a scintillating league campaign to be an arms reach away from retaking their Champions title. The introduction of Lionel Messi into the squad has proven to be a key factor in the improvement of their performances. PSG are 12 points clear of Marseille at the top, which provides them with a comfortable cushion in case some sub-par performances are produced towards the end of the season. If PSG get the better of Marseille on Sunday, they would only need seven points to win the league, as the distance to second place would be extended even more.

Despite PSG being a dominant force in France this season, Marseille aren’t a side to be written off. Winning their last four league games, Marseille are in a nice patch of form, which could trouble PSG and make their night more difficult than expected. Marseille are three points above third place, with a game in hand, meaning that three points for Marseille would go a long way in making a second-place finish feel safer.

During the week, Marseille continued their strong season by advancing through to the semi-finals of the UEFA Conference League. Despite the fact that they would qualify for the Champions League if they were to finish second in the league, they have shown their ability to continue to advance through the Conference League this season, which could boost the momentum and confidence of the side. Despite this being a positive, with PSG being dumped out of the Champions League, this has provided The Parisians with more rest and recovery time to prepare for this fixture.

With this tie also being a clash of best home form (PSG) versus best away form (Marseille) in the league, this shapes up to be an entertaining fixture. Have a look at my bet builder selections below, as well as the Cheat Sheet, as we will get a better view of how the final Ligue 1 table will shape up.

Even though PSG will be facing a Marseille side that can give them a difficult night, I still expect them to come away with the win.

PSG have the best home form in the league this season. Their phenomenal record almost boasts a 100% win rate, as PSG are unbeaten on home turf. Out of the 15 games played at home, they have won 14 and drawn one. Their resilience at home suggests that despite the threat that Marseille will be able to bring to the match, the visitors will find it extremely difficult to penetrate a side that have won their last seven home games on the bounce.

PSG score an average of 2.6 goals at home per game, which reinforces their ability to get the better of their opponents. Their ability to score a handful of goals per game from an incredibly talented squad has increased their comfortable ability to produce fantastic performances at home. With the likes of Messi, Neymar and Mbappe producing a constant goal threat, this lifts the whole of the side in order to turn the Parc des Princes into a fortress.

PSG have scored in 14 of their 15 home games, which provides strength to their incredible home form this season. With The Parisians keeping clean sheets in 53% of their home games, this combines nicely with their goalscoring record to show that PSG do have a good record of keeping their opponents out, which contributes to their home successes even more.

Being able to deliver on a constant basis, this has been an integral part to PSG’s impressive campaign, as they have outclassed their opponents to regain the league title. With Marseille expected to bring some trouble, I still believe PSG will claim the victory on Sunday night due to their mightily impressive home form that they have produced throughout the season.

After detailing the reasons why I’m expecting PSG to come out of this game victorious, I also believe that Lionel Messi will be the man to orchestrate his side’s performance on Sunday night. With a fantastic record of providing chances this season, I’m expecting him to produce an assist against Marseille.

This season, Messi has been fairly quiet on the goal scoring front but has not shied away from goal involvements as he has been producing bucket-loads of assists. Messi has produced three assists in a single game not once, but twice this season which highlights his unselfish style of play, and his everlasting ability to provide chances to his teammates.

Since the international break, PSG have scored 11 goals in their last two games. This shows their upturn in form, and their incredible momentum on the scoresheet. With this being a possible occurring trend which can carry on against Marseille, the chances that Messi will provide an assist amongst a flurry of goals is almost a certainty, as the Argentinian is always in the middle of the action.

The fact that PSG’s side boast a tremendous amount of talent, this increases the chances of goalscoring opportunities being converted. With the likes of Neymar and Mbappe alongside Messi, their clinical, world-class ability almost guarantees goals. This means that when Messi creates opportunities, there is an increased likelihood that the chance will be converted due to the incredible talent alongside him, which boosts his assist numbers up.

Messi is the second highest assist provider in Ligue 1 this season with a tally of 13. He is only one assist behind Mbappe who top the charts, showing the extent of goals created in the PSG attack. Messi has exceeded his xA (expected assist) stat by 5.7 assists, which boasts his unbelievable ability to defy statistics and produce passes that are of the utmost quality.

Dimitri Payet to have 1+ Shot on Target

Even though I’ve described the extent that I believe PSG will end the night with a victory, Marseille will not be a side that will be discarded easily. I expect them to still bring a good challenge to the league leaders, and I think that Dimitri Payet will lead the Marseille threat.

Payet is in a nice patch of recent form, as he has scored three goals in his last four games in all competitions. Often being one of Marseille’s brightest attacking players, Payet normally racks up an average of 2.17 shots per game, which shows his strong contribution to Marseille’s attacking threat. Being a seasoned player, Payet has scored his fair share of stunning goals throughout his career and is showing no signs of deteriorating form despite being a ripe 35-years-old.

Payet has attempted five penalty kicks this season, which shows that he is depended on from the spot if needed. His fantastic set-piece ability also means that Payet is responsible for taking goal-threatening free kicks. Attempting 21 free kicks in the league this season, he is the man that Marseille depends on to cause a threat from a dead ball situation.

Payet’s long range shooting is also something that needs to be admired, and something that PSG need to deal with. Payet’s average shooting distance is 22.5 yards, which shows that he is comfortable with testing the keeper from outside of the box. These factors have contributed to Payet scoring 10 league goals so far this season, as he is a crucial part of the Marseille attack.

Playing 25.3 full 90 minutes in 27 league appearances, Payet is a man that is depended on in big fixtures, which I believe he is a solid selection to achieve a shot on target. He will carry Marseille’s attacking threat against PSG and show them why they are currently sat second in the table.

Prediction: Dimitri Payet to have 1+ Shot on Target

Back the 6/1 PSG v Marseille Bet Builder below ⬇️

Sign up to Paddy Power and get a full refund if your first bet loses. Grab an account through the offer below and place £30 on the 6/1 PSG v Marseille Bet Builder. Here are the two possible outcomes:

How to watch PSG v Marseille in Ligue 1