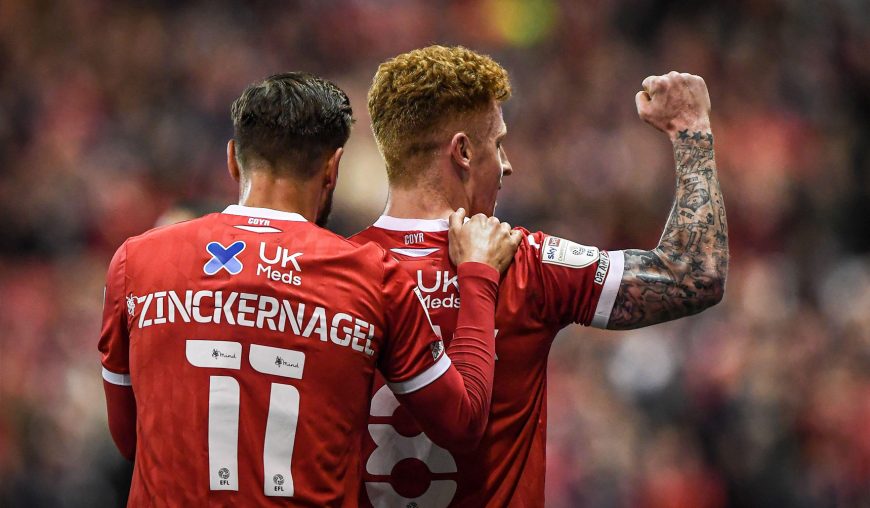 Sheffield United plays host to Nottingham Forest as the Championship season concludes with the 4 remaining sides fighting to take the final place in the 22/23 Premier League season through the playoffs. Although Forest finished five points in front of the Blades, the visitors lost some momentum during their final fixtures of the regular season. Whereas, the hosts enter this playoff semi-final having won their final three games of the regular season. As a result, this should be a very competitive affair and one definitely worth sticking a few quid on.

So, I thought I would have a look through all the season’s statistics for both these sides and piece together my top 3 bet builder tips. As well as that I have also put together the usual pre-match cheat sheet along with predicted lineups for anyone looking to place these and any other bet on this match.

Entering the final matchday of the season Sheffield United had not yet secured a place in the top 6 and with the champions Fulham to face there was still a small possibility of the Blades finishing outside the playoff places. However, Paul Heckingbottom’s side quickly dismissed this possibility as they led the Prem bound team by 3 goals with just 25 minutes on the clock. Sheffield United looked very impressive in that fixture and if they carry their end-of-season form into the playoffs there is a real possibility of them upsetting many pundits’ favorites for promotion.

In contrast to Sheffield United’s end of the season, Forest’s remarkable campaign finished somewhat disappointingly for many of their fans as they were unable to secure automatic promotion. The loss to Bournemouth and the last gasp draw against Hull is not the form Steve Cooper would have wanted his side to enter this fixture in especially considering the fact they face a side who has suffered just one home defeat since the start of November. Forest fans will hope their side reaches the heights they achieved throughout the campaign and not let this poor spell hinder their chances of promotion.

In the two fixtures between these sides this season both teams have found the net, with the scoreline finishing 1-1 on both occasions. I expect this trend to continue into the first playoff leg at Bramall Lane on Saturday.

At home this season Sheffield United have scored 38 goals in their 23 matches enough for an average of 1.6 per game and the 4th most home goals scored in the Championship. Equally, Sheffield scored in just under 80% of their matches at home as when playing at Bramall Lane they have only failed to score in 5 matches this season. With 3 of those matches finishing goalless, suggesting that if there are goals in this fixture Sheffield is likely to find the target at least once.

The percentage of this selection landing for Sheffield might be one of the lowest in the league at 41%. However, this seems to be due to their impressive defensive record and not their inability to score as they have successfully kept 20 clean sheets and conceded just under a goal per game this campaign. When facing a side as prolific as Forest the chances of United conceding are increased massively, and the probability of this selection landing is boosted.

Away from home this season Forest have scored 30 goals in their away games and have the 3rd best record in the league on the road so they will be confident in finding the net in this fixture. Equally, they have scored the 3rd most goals in the league at an average of 1.6 per game with two of their players having scored over 10 goals with Brennan Johnson scoring 16 and Grabban scoring 10. Steve Cooper’s side also creates an average of 1.9 big chances per game with 4.3 shots finding the target, if this trend continues into the playoffs it is unlikely United will successfully keep a clean sheet in this fixture.

Both teams to score is priced at 2.0 on Paddy Power and this is likely because of Sheffield United’s low success rate in this selection. However, with the form of these two sides, the probability of this selection landing is higher than this season’s average shown in the fact that it landed in both previous fixtures between these teams.

Nottingham Forest’s opposition averages an incredibly high 2.89 yellow cards per game the most of any team in the league by some margin. Although this average decreases slightly to 2.52 when playing away from the City Ground, it remains the highest of any side’s opposition. This suggests that the chances of Sheffield picking up several cards in this match is very likely. Which was the case in the previous meeting between these sides at Bramall Lane where the home side received 4 cards.

Equally, in the previous 6 meetings between these two sides the game has seen at least 4 cards produced by the referee. If this trend continues then this selection has a high probability of landing, especially when taking into account the importance of this game for both sides.

Both teams averaged 1.9 yellow cards per game in their league campaigns. An average that if met by both teams will be enough for success in this selection. However, when coupled with the added intensity of this fixture and Forest’s opposition’s tendency to pick up a high number of cards this selection should land with little resistance.

Over 3.5 cards in this fixture is priced at 1.44 on Paddy Power and if successful this selection will offer a small but not insignificant boost to the overall odds of this bet builder.

Forest averaged 5.54 corners per game in their league campaign suggesting that although Steve Cooper’s side would need to reach their season average there is still high value in this selection. Especially, when considering that Forest took an incredible 12 corners the last time they travelled to Bramall Lane in March. Forest could half this and we would still hit with this selection. Equally, when these two sides met at the City Ground earlier this season Sheffield allowed Forest to take 6 corners.

Sheffield’s opposition only averaged 4.04 corners per game at Bramall Lane, which is cause for some concern but considering Forest easily achieved the 5 corners required in the previous 2 meetings between these teams coupled with this selection landing in 5 of Forest’s last 8 fixtures. Equally, in all of their last 4 fixtures against sides that finished in the top 6 Sheffield allowed their opposition to take 5 or more corners.

Sign up to Paddy Power and get a full refund if your first bet loses. Grab an account through the offer below and place £30 on the 5/1 Sheffield United v Nottingham Forest Bet Builder. Here are the two possible outcomes: