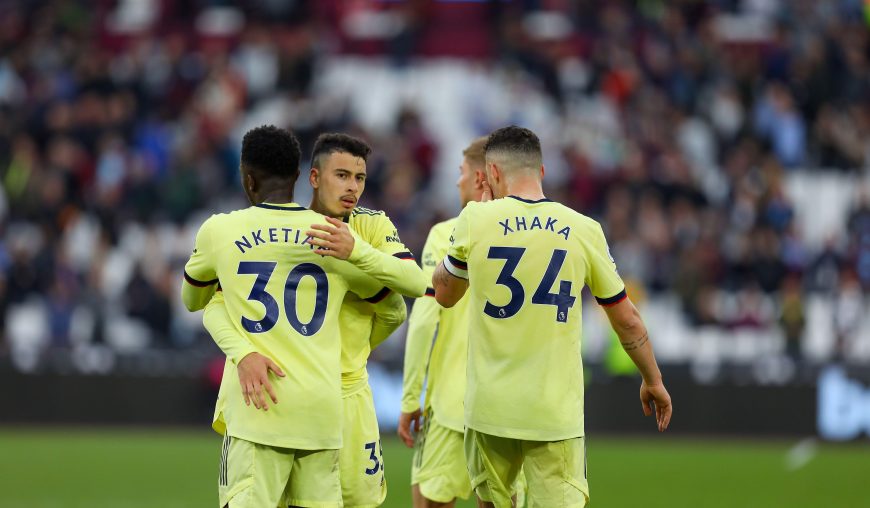 Sunday’s action at the Emirates is a huge game at both ends of the table. Arsenal will hope to retain their top 4 spot with a win on Sunday, while Leeds desperately need points to preserve their Premier League future. Kick off is at 14:00 on Sunday and to prepare you for this highly contested match I’ve prepped a Cheat Sheet and my top 3 Bet Builder Picks.

Arsenal fans will be singing the praises of Mikel Arteta coming into this fixture. The Gunners have picked up consecutive wins against Chelsea, Manchester United, and West Ham. At the business end of the season, I think even the manager will have been surprised to collect maximum points from such a tough fixture list.

Prior to this hot streak was a mirror image run of losses against Crystal Palace, Brighton, and Southampton. These clubs are more synonymous with their opponents on Sunday and there will definitely be concern about Leeds being a potential banana skin in the race for top 4.

Arteta hasn’t been beaten by the visitors yet in his tenure, and Arsenal haven’t tasted defeat from Leeds since 2003. They’ll enter this match as the favourites and with a clean bill of health from their last fixture. Their only absentees will be Kieran Tierney who is ably replaced by Nuno Tavares and Thomas Partey whose place may be jeopardized by the excellent performances of Mohamed Elneny.

Leeds will be licking their wounds after a 4-0 pasting from Manchester City last time out. This sort of result is just another day at the office for Manchester City against anyone outside the top 6 and should not be over analyzed to determine Leeds chances on Sunday.

They’ve actually been on a decent streak since appointing Jesse Marsch despite a rocky start to life for the American. After two losses his Leeds team went 5 games unbeaten picking up 3 wins along the way against Watford, Wolves, and Norwich.

The sacking of the god-like Marcelo Bielsa has actually turned out to be (whisper it quietly) the right decision in terms of winning points. Their recent form would be regarded as highly impressive, but it is contextualized by Burnley who have had a similar trajectory this season after sacking Sean Dyche. Burnley’s 3 wins on the bounce have seen them leapfrog Leeds who now sit in 17th and with Everton aiming at the target on their back 2 points behind.

They are now the favourites to take the final relegation spot and 3 points is critical from every game till the end of the season. Everton take on Leicester at the same time to add to the drama on Sunday. If the Toffees win, Leeds will find themselves in 18th and playing Chelsea next week.

They’ll enter this match with persistent injuries in key positions. Liam Cooper, Patrick Bamford, Tyler Roberts, and Stuart Dallas are just some of the absentees for the trip to London. The team will be desperate for a win, but they face a daunting challenge travelling to Emirates to play an on-form Arsenal squad.

Junior Firpo to be Shown a Card

Junior Firpo is the obvious pick for a booking on Sunday. He’s likely to start in the absence of Dallas unless Struijk is opted for as the first choice left back. He’s had 5 bookings in his last 6 appearances and last time out at City it only took him 7 minutes to be reprimanded.

He’s Leeds most booked player as per the Cheat Sheet with 10 bookings to his name from only 20 appearances. This title is well deserved considering the Spaniard commits 2.45 fouls per game on average.

Firpo is what you would call a front foot defender. His fouls that lead to bookings are not made in the final attacking phase but instead closer to the halfway line. He likes to press the ball immediately and moves out from his defensive line to hassle attackers for the ball. The challenge against left-footed Phil Foden on Firpo’s left hand side of the pitch is good insight into why he’s in trouble on Sunday.

Bukayo Saka will be Firpo’s dance partner tomorrow and will be putting pressure on the Spaniard’s weaker right foot by cutting inside. From the Cheat Sheet, Saka draws the most fouls out of any Arsenal players with 2.34 per game. He’s always looking initiate the attacks in early phases of play and will put Firpo in 1v1 situations that are likely to test his patience and his defensive skills.

Leeds are by far the most booked team in the league. The ref in charge Chris Kavanagh will be adding to their tally no doubt considering he’s dished out a respectable 3.73 cards per game this season. A dirty team, disciplinary ref, tricky winger, and a badly behaved Spaniard makes this selection good value at odds of 2.88.

Prediction: Junior Firpo to be Shown a Card

Eddie Nketiah to have 2+ Shots on Target

The departure of Aubameyang to Barcelona raised a lot of questions about Arsenal’s transfer policy. Another free transfer leaving a gaping hole in the team left fans in despair that the season would continue without a quality striker in place. Lacazette tied things over to the best of his abilities, but in recent weeks there has been a changing of the guard.

Aubameyang clearly didn’t care about Arsenal towards the end of his tenure. Someone who has a clear desire to play for Arsenal is their reinstated youth striker Eddie Nketiah who will be starting on Sunday. He’s returned from the wild after numerous loan spells and made a serious claim to be their new number 9 with 2 goals in his last 4 starts.

The difference in effort levels has been remarkable. He is a man on a mission when it comes to driving into the box and has the capacity to do it all himself running past defenders. In his last 4 starts he’s had 13 shots with 7 hitting the target.

Against West Ham last week, he managed an impressive 4 shots on target! He also managed 2 against Chelsea in their 4-2 win and will be facing off against a Leed’s defence without the experience of captain Liam Cooper. Leeds are notoriously open at the back this season and have conceded the 3rd most shots in the league behind fellow strugglers Norwich and Burnley. Theres the potential for the young striker to have a field day on Sunday against a leaky Leeds team and he’s available to hit the target twice for odds of 2.0.

Prediction: Eddie Nketiah to have 2+ Shots on Target

They’ve been good value for fans home and away too with the highest instance of over 2.5 goals in the league this season with a hit rate of 65%. Arsenal aren’t far off that number either managing to see 3 or more goals in 56% of their games.

The reverse fixture saw 5 goals between them in a 4-1 resounding win for Arsenal. There may be a different winner with so much on the line but one thing I’m predicting is a similar number of goals for 2 teams only considering a victory as an option. For there to be 3 or more goals at The Emirates is available for odds of 1.5.

Back the 7/1 Arsenal v Leeds Bet Builder below ⬇️

Sign up to Paddy Power and get a full refund if your first bet loses. Grab an account through the offer below and place £30 on the 7/1 Arsenal v Leeds Bet Builder. Here are the two possible outcomes:

How to watch Arsenal v Leeds in the Premier League