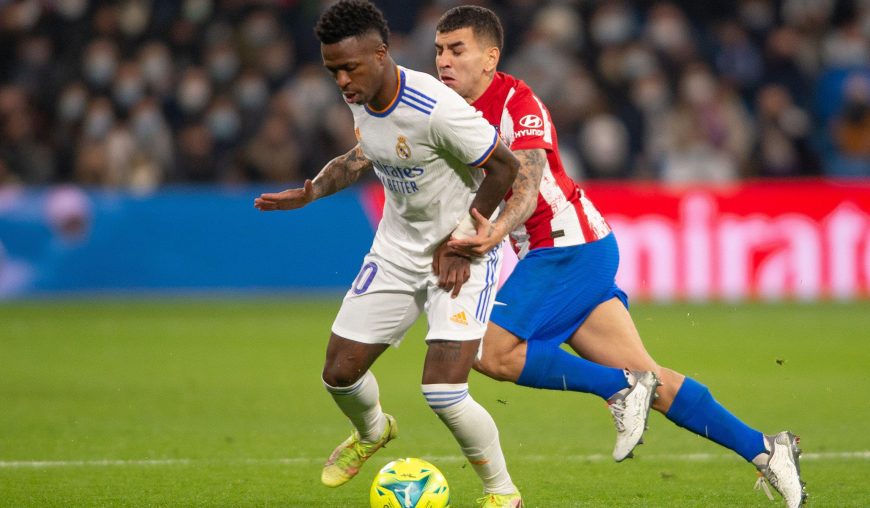 Freshly crowned champions of LaLiga and having secured a Champions League final place in dramatic fashion, Real Madrid come into Sunday evening’s Madrid derby flowing with confidence. I’ve done some digging through the stats to prepare you for the final Madrid derby of the season to provide a Cheat Sheet and my top 3 Bet Builder Picks.

Carlo Ancelotti is likely to make changes to rest and rotate key players against Atlético Madrid. Injuries in defence mean that Nacho and Jesús Vallejo will likely form the starting defensive partnership in the middle, with Vallejo making only his second start of the season. Marcelo and Lucas Vázquez could also come in at full-back to give the Real Madrid back line a completely different look to the midweek win over Manchester City.

In attack, Rodrygo Goes’ four goals in his last two appearances will be rewarded with a start while Marco Asensio is also likely to feature from the off, having scored in both of his most recent two starts for the club.

Diego Simeone’s side have it all to play for. Only one win in their last six games in all competitions has left them only three points clear of fifth-placed Real Betis heading into this weekend. Their 2-0 defeat to Athletic Club last weekend was arguably the lowest point yet in a dreadful run of form and goalscoring concerns continued, with Atleti having failed to score in five of their last six matches.

Karim Benzema to have 1+ Shots on Target

If there’s one man that you can rely on in this fixture, it’s Karim Benzema. Having been taken off in extra-time against Manchester City and in pursuit of goalscoring records, Benzema is almost certain to start and play a prominent role for Real Madrid, regardless of any rotations, in what would be his 38th Madrid derby.

Benzema has registered a shot on target in each of his last six outings for Real Madrid, and has only failed to do so against one team in LaLiga in 2022, Getafe. His accuracy is also looking impressive, given that 63.6% of his shots have been on target in his last eight league games, compared to a season average of 47.5%.

In his last six meetings with Atlético Madrid, he has averaged 1.2 shots on target per encounter, and will again look to step up to the plate as Real Madrid’s leader in attack. Having requested to come on as a substitute against Espanyol last weekend with the league title in the bag and a Champions League semi-final only days away, it’s clear that Benzema isn’t going to take his foot off the gas.
With the Frenchman leading the line for Real Madrid, and Atlético’s defence unlikely to contain his talents as they have struggled to do through the years, one or more shots on target from Benzema seems inevitable. That can give you odds of 1.33.

Prediction: Karim Benzema to have 1+ Shots on Target

Šime Vrsaljko to be Shown a Card

Madrid derbies are often feisty occasions with five cards per derby on average over the last two seasons. Cards are likely too as the referee for the occasion is Alejandro José Hernández Hernández, who averages an impressive 7.17 cards per game, the highest figure for any LaLiga referee.

Among the leading candidates to receive a card will be Atlético Madrid right-back Šime Vrsaljko. He has averaged a yellow card every 85 minutes across his last five appearances, and is undoubtedly one of the hotheads in the Atlético Madrid defence.

He has only actually played against Real Madrid once in his career, despite having joined Atlético six years ago, and was booked on that occasion. He’s the kind of player who will rally fans in a heated fixture, and his 1.63 fouls per game average this season is likely to be surpassed.
His thundering approach and style, plus a tough test up against the speed and pace of Rodrygo Goes, is likely to test the Croatian. The chances of him to be shown a card are very high and at good value with odds of 2.9.

Prediction: Šime Vrsaljko to be Shown a Card

The likelihood is that given the changes to the Real Madrid team, Carlo Ancelotti is unlikely to try to blitz the Atlético Madrid defence. With changes in his own backline, and expected to field both Eduardo Camavinga and Casemiro in midfield, a more conservative approach is more likely to protect a much-changed defensive unit.

Atlético’s recent struggles in front of goal mean that they’ve significantly underperformed in attack, with only two goals from 5.43 xG in the last six games. That tendency seems unsustainable long-term, but a shooting accuracy of 17.9% and a conversion rate of 3.4% mean that most Atleti fans will be pessimistic heading into this fixture.

The Derbi Madrileño is often a tense affair, with it only producing more than 2.5 goals once in the last five seasons in LaLiga. That was a 3-1 win for Real Madrid at the Estadio Wanda Metropolitano in 2019. What’s more, three of those seasons have had at least one of the two meetings between the two sides end with a 0-0 draw.
Given doubts over whether or not Carlo Ancelotti will rotate fully, picking a winner could be a harder test, but whatever happens, there is unlikely to be a goalfest. With all this in mind, a bet of under 2.5 goals pays at odds of 1.82.

Back the 7/1 Atletico v Real Madrid Bet Builder below ⬇️

Sign up to Paddy Power and get a full refund if your first bet loses. Grab an account through the offer below and place £30 on the 7/1 Atletico v Real Madrid Bet Builder. Here are the two possible outcomes:

How to watch Atletico v Real Madrid in the La Liga