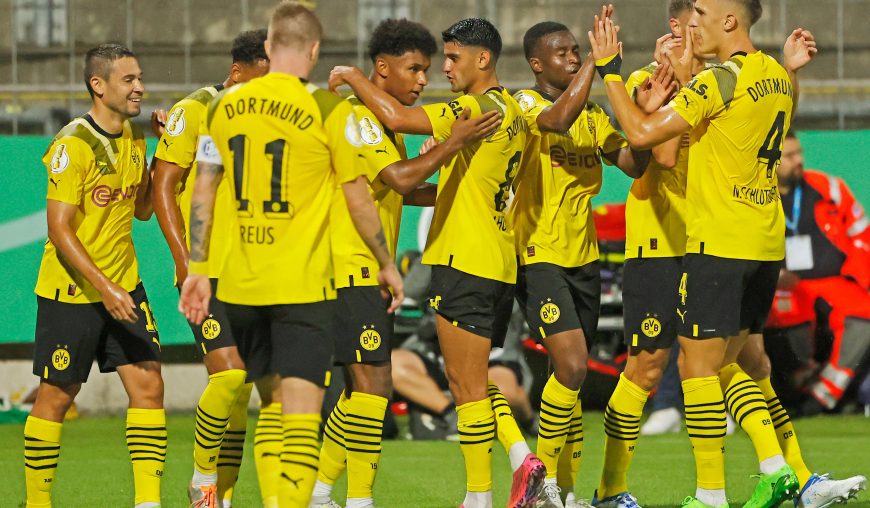 The opening weekend of the Bundesliga season has arrived and there’s no game more exciting than Saturday’s Topspiel between Borussia Dortmund and Bayer Leverkusen. Last season, this fixture yielded 14 goals, and has always provided fans with some incredible moments in the past. In the last six games alone, 32 goals have been scored between the pair and we can expect to see more of the same this weekend.

Borussia Dortmund have replaced Marco Rose with fan-favourite Edin Terzic in the dugout whilst Gerardo Seoane has one of the best young squads in the Bundesliga at Bayer Leverkusen. For the opening game, Terzic will be without Niklas Sule, who suffered a muscular injury during their DFB Pokal win against 1860 Munich last weekend, and Sebastien Haller, who is sidelined for the foreseeable after undergoing surgery to remove a tumour on his testicle. After suffering an ACL injury towards the end of last season, Bayer Leverkusen will be without Florian Wirtz.

With a plethora of exciting players at their disposal, both Borussia Dortmund and Bayer Leverkusen are expected to finish in a Champions League spot at the bare minimum. But for BVB fans, they must challenge Bayern Munich this year. They closed the gap to eight points last season, but Bayern were far from their best. Under Rose, BVB were subject to poor performances and fans will expect an improvement this season, starting against Bayer Leverkusen in Saturday’s evening slot.

Borussia Dortmund conceded 52 goals last season, the most of any team in the Bundesliga’s top eight, which included Union Berlin, Cologne and Mainz. They’ve shored up their defence and going forward, are perhaps one of the most exciting teams in the league. But against a Bayer Leverkusen attack that includes Moussa Diaby and Patrik Schick, who scored 37 Bundesliga goals between them last season, the BVB defence is in for a busy afternoon. However, B04 are also prone to a defensive error. Up against Karim Adeyemi, Donyell Malen & Co., Borussia Dortmund can be quick and ruthless in attack. Both are almost guaranteed to score as they push for a win on the opening weekend, applying early pressure on Bayern Munich. Borussia Dortmund are favourites to win, but also expect Bayer Leverkusen to score.

Donyell Malen to have 2+ Shots

With the absence of Sebastien Haller, Donyell Malen could be the forgotten goalscorer in this Borussia Dortmund team. His 27 goals across 45 games in 2020/21 for PSV earnt him a move to the Westfalenstadion. A poor first season at BVB under then head coach Marco Rose, Malen managed just five Bundesliga goals in 27 games. But the Dutchman could really benefit the appointment of Edin Terzic. Between 2019-2021 for PSV, Malen averaged over 4 shots per game and in his maiden Bundesliga season, averaged 2.51. The 23-year-old looked sharp last weekend against 1860 in the German Cup and up against compatriot Jeremie Frimpong, Malen could be in for a fun afternoon, cutting in from the left onto his favoured right-foot.

Prediction: Donyell Malen to have 2+ Shots

Robert Andrich to be Shown a Card

Bayer Leverkusen midfielder Robert Andrich isn’t a stranger to a card. In his 85 Bundesliga games for Union Berlin and B04, the German has picked up 21 yellow cards, has been sent off for a second-bookable offence and has been shown two red cards. Averaging over two tackles per game in the Bundesliga last season, Andrich puts himself about on the pitch. In front of a sold-out Westfalenstadion, Andrich strives of winding up opponents and can be a nuisance. If there’s any cards being shown in this fixture, he will be a receiver of one of them.

Prediction: Robert Andrich to be Shown a Card

Sign up to Paddy Power and get a full refund if your first bet loses. Grab an account through the offer below and place £30 on the 3/1 Borussia Dortmund vs Bayer Leverkusen Bet Builder. Here are the two possible outcomes:

How to watch Borussia Dortmund vs Bayer Leverkusen in the Bundesliga