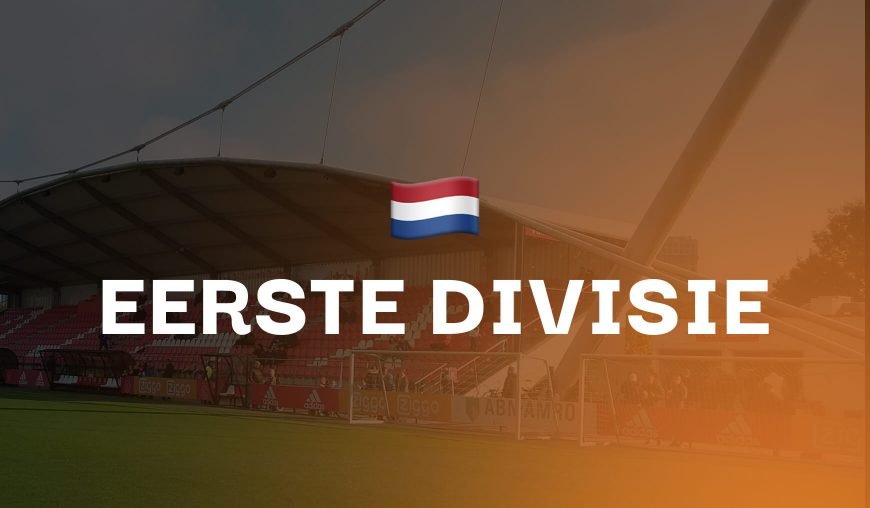 This Friday is the penultimate Eerste Divisie round with all ten games at the same time. For a couple of teams, the season is done, but there are several teams that still have lots to play for. The game with the most at stake is probably this one, where Almere City are still in the race to win the fourth phase mini league and qualify for the play-offs that way. Two victories in the last two games would be enough, but with ADO they are facing a tricky opponent.

After a difficult spell under interim-manager Giovanni Franken, the team suddenly improved a bunch and look competitive again for the play-offs. They have long qualified for the end of the year promotion/relegation tournament, so the thing that really matters is to keep the rhythm towards that tournament. Almere City has especially improved offensively in the past couple of weeks and ADO probably has one of the leakiest defences from the teams in the top half of the table.

The home side does very much like to go forward and have a few quality players creating and finishing scoring chances. Sem Steijn has already been signed by FC Twente and Thomas Verheydt is second in the top goalscorer ranking. As Almere need the win and are playing positively, I expect a game with goals on both sides.

Another team that still has everything to play for is NAC Breda. They are currently holding a play-off ticket, but are only a point ahead of de Graafschap. De Graafschap’s current ninth place may be enough for the play-offs, but only if Almere City don’t win the fourth phase title and that is starting to look more and more likely. Neither NAC or De Graafschap would want to take their chances on that, so they will be fully motivated.

For TOP Oss the season is over. They had a few good games recently, but the defeat at the hands of Almere City last week meant their last minor chance of a play-off spot is now gone as well. That won’t mean they’ll give up completely, but holiday season is coming and with the pressure off, that probably does mean they won’t have the same focus as earlier this season.

NAC Breda will feel full pressure for this game. They are usually quite good in front of their own loyal group of fans, but last week they recorded a bad home defeat at the hands of FC Dordrecht. It was the first real shocker at home in months. It looks that they got complacent after leading at half-time. The defeat doesn’t necessarily have to cost them, but if they drop points again here, they do put their play-off participation in jeopardy. That’s why I think they won’t make the same mistake twice and will take the three points here, because quality wise they should be better than TOP Oss.

Four days after their 6-1 victory over VVV, Jong Ajax will face MVV Maastricht, who are almost bottom of the table, but in comparison to Monday, there will be a very different Ajax team in Maastricht. That’s got everything to do with the first team, who are playing the important league game against PEC Zwolle on Saturday, and manager Erik ten Hag will surely get all the players he might need to be involved with the first team.

That means that the three Mo’s; Daramy, Kudus and Ihattaren, who were very important against VVV with goals and assists, won’t be there. That same will go for Kenneth Taylor and Liam van Gelderen, who’ll surely be involved in the first team and maybe one or two other surprises. Jong Ajax are still a good team, in fact they are still a better team than MVV, but won’t be as dominant offensively. MVV showed on Monday they have the fighting spirit to take advantage of that. They came from 2-0 behind to claim a draw against a strengthened Jong PSV.

With Maurice Verberne as new manager, MVV have been a bit steadier than before. Neither team really has much to play for and I suspect that the difference between Jong Ajax and MVV isn’t that much at the moment, so I’d put money on MVV not being wiped away in their own stadium.

This match between two teams at the bottom end of the table is not important for either team in their aspirations to win anything, as it is too late for that. Nevertheless, Helmond Sport have a fairly new manager and Jong AZ players will be eyeing a chance with the first team next year, so I don’t think either team will give this game away.

Helmond Sport have conceded a lot of goals recently, but that has mostly been against play-off level teams. Jong AZ are probably the most defensive side in the league. Last week, Jong AZ did have an open house, with a 3-3 draw against Excelsior that could have even been more, but apart from that, they mostly concede very few goals. It is mostly the lack of creative football that is obvious at AZ. They are missing a few important attacking players like Yusuf Barasi en Jelle Duin, but it is also just that their style is pretty defensive minded.

Neither of the teams really have anything to lose, but I suspect Helmond Sport won’t go all out attacking this match. In the game between the two least scoring teams in the league, I think that means that there won’t be lots of chances and goals.

VVV are after the 6-1 away defeat at Jong Ajax and even though the Ajax academy team had quite a few first team players in the side, what stood out was the lacklustre defence at VVV. After the 2-1 they just seemed to give up and with nothing to play for that scenario could repeat itself against Excelsior.

Excelsior don’t have that much to play for either, as they are already qualified for the play-offs and direct promotion has already been decided in Volendam’s favour. Their form has been below average, with a shock 4-1 defeat against Telstar and a 3-3 against Jong AZ. The attacking line, that after a great first half of the season, doesn’t produce the same fear anymore with their opponents, wasn’t the problem against Jong AZ. Excelsior should in fact have scored a couple more goals in that game. The defence hasn’t been as good, but captain Redouan el Yaakoubi, who missed the games against Telstar and Jong AZ is back from suspension.

Excelsior can’t really climb any further, but the main goal is to get their form back ahead of the play-offs. They could really use a good result in the last two games, otherwise they’ll go into the play-off without much confidence. A VVV side that seems to have given up on the season, might be the ideal opponent for that. That’s why I expect Excelsior to pick up their first win in five games this Friday.

Sign up to Betfair and get a full refund if your first bet loses. Grab an account through the offer below and place £20 on the 8/1 Eerste Divisie Best Bets Accumulator. Here are the two possible outcomes: