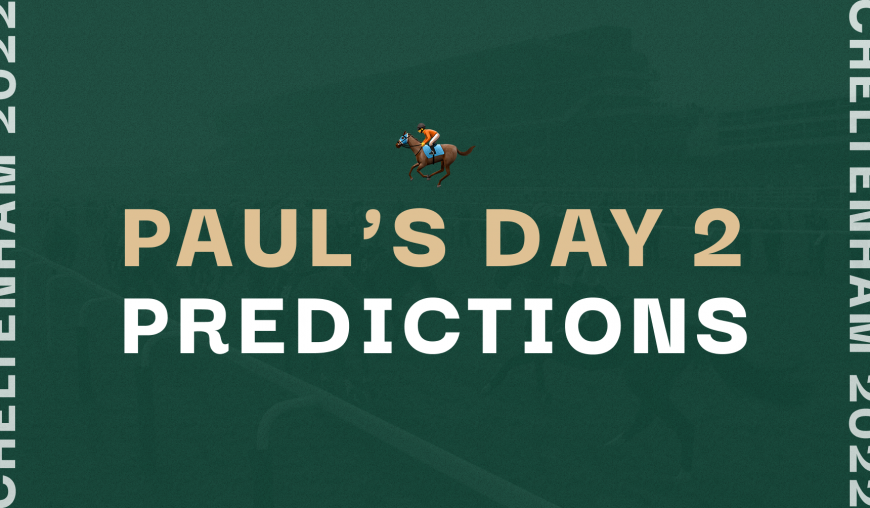 Sir Gerhard is the warm favourite here and rightly so if stable gossip is to be believed. It’s not in the spirit of Cheltenham to be backing odds on shots but the opposition is very weak in behind Sir Gerhard. The second favourite Three Stripe Life has been beaten by Sir Gerhard multiple times (including when behind him in the Bumper at the Festival last year), throw in the fact Sir Gerhard looks likely to improve for taking a lead, and having a target to aim at there is a case he is value at odds on if such a thing is possible in racing. He should be the corner stone of any multies you do during the week.

Due to the short price nature of the fav and there being 8 runners it is a good E/W betting heat and I’m going to take a chance that team Mullin’s will find improvement in their second string Whatdeawant, I got the impression listening to Willie, he wasn’t happy with the ride the horse got when a well beaten 5th in Grade 3 company last time, he was very well backed that day so they think a bit about him and I’ll take a stab that he improves here, at a big price.

L’Homme Presse is my selection here. His time when winning the Paddy Power Chase on New Year’s Day, suggests to me it’s the strongest piece of form on offer coming into this. L’Homme Presse then went on to win a weak G1 next time at Sandown but did so effortlessly and he rates a good win bet.

My E/W alternative is Beacon Edge, he already has a Grade 1 to his name having won a lung busting Drinmore over 2 and half miles before falling, and being a good second last time out when being done for toe by a smart rival. A well run 3 miles promises to bring out improvement in this out and out stayer and he offers value towards the bottom end of the betting.

The Shunter reverting back to hurdles is a great switch in my view, he’s not a natural over fences but has been running well despite sloppy errors throughout a lot of his chase starts. Being back in the hurdling sphear he races off a lower mark then he has been doing all season. Making him in my book one of the few well handicapped Irish horses based on form. He can often race off the bridle looking under pressure but he will plug on and hopefully he’s within striking distance turning for home.

As an E/W play I’m going to go for Call Me Lord, he is an exposed 9 year old but he has been given a chance by the handicapper, racing here off of a mark of 142. He has a Grade 2 to his name at Cheltenham and was considered good enough to take a chance in the Champion Hurdle, at the Festival 2 years ago. He ran a lovely race in 3rd in a competitive handicap 2 starts ago off 144, before being below his best last time. We are getting enough compensation in price and a small e/w play looks worthwhile, this is a good e/w race for punters so I won’t put anyone off backing my win selection e/w.

The Shunter to Win Outright

If the Clarence House was the race of the century what does it say about this! We have 2 Ascot runners re-opposing here, and if that wasn’t enough, there is the addition of the scintillating Chaqun Pour Soi. It’s the outsider of the top 3 that I’m backing. His record when travelling across the Irish Sea is poor, he was a disappointing 3rd in this race last year, and was a disastrous last of 5 in the Tingle Creek on season reappearance. There is a legitimate excuse for the Tingle Creek, when he suffered the human equivalent of a hamstring injury (I think we would all be a disappointing last if suffering one of those). His 3rd place in this last year, is harder to forgive, but I find Willie’s comment after his last win very interesting. He thought the horses went over the boil, when traveling over last year and will train him differently. There was a time when I had little doubt Caqun Pour Soi was the best chaser in training, and I’m backing him to throw his name back in that discussion along with the likes of Allaho.

In terms of an E/W selection Envoi Allen is a big price, there has been 2 defeats since his fall at last years festival. One defeat came when making a bad mistake and hurting himself at Punchestown last May and the other was an excuseless 6th in the John Durkan where he was well backed. At a big price I’ll chance he retains his old ability.

The mighty Tiger Roll bids to win this race for the 4th time in his brilliant career. A real specialist over these obstacles, he is the one to beat here even at the age of 12. Good ground is essential to him, and with the cross country course historically having faster ground then the main course (cross country inaccessible for watering purposes). He should get good ground here and will take plenty of beating. Conditions look ideal for Tiger Roll to bow out like the hero he is should – in the winners enclosure.

Towards the top of the market I like the credentials of Thyme White for a win bet, he is a 6 year old on the up, and he won in lovely style under the minimum of fuss from his rider, last time out. An 8 lb rise in the weights looks fair, and I think he will go very close. His jumping is an asset to him, which is a must over this trip, where they will go a good gallop. His trainer reported he is working very well at home so he gets my vote.

The other I like in here at a bigger price, is For Pleasure. He drops in grade here, having been contesting Grade 2’s in his last 2 starts. He wasn’t asked for much effort, when his chance went the last day so don’t look too much into that run. He has a lovely front running style which suits chasers around here. A mark of 138 looks workable for him, particularly when you look further back to his hurdle form, which includes a Grade 2 at Cheltenham. He is a solid E/W pick. Similar comments to earlier in that I wouldn’t put punters of backing Thyme White E/W, with punter friendly place terms on offer.

This looks like a brilliant race, that will throw up lots of Grade 1 and Cheltenham winners in years to come. American Mike really impressed me on the clock, when winning a listed bumper without any question being asked of him. I think he is better value than the favourite, in what can be a very messy race. You want every bit of value on your side to make up for horses being hampered and not getting racing room. The fact American Mike is a bigger price, and in my book has achieved more than the Facile Vega, makes him an easy pick.

On the basis of his form and having 4 starts to his name Our Jester looks appropriately priced but I was very impressed with his numbers when winning at Ascot 2 starts back. He has to improve to be involved here, but his stride pattern suggested he is open to plenty of improvement and he is the best E/W bet of the day. It could just prove that smaller connections needed time to get him right having been beaten on his first 2 starts. I’m looking forward to seeing how he gets on in his bid to land the hattrick in the most ambitious way possible.

Sign up to Paddy Power and get a full refund if your first bet loses. Grab an account through the offer below and place up to £30 on any horse on Day 2 of the Cheltenham Festival. Here are the possible outcomes if you if you back any horse on Day 2:

How to watch Day 2 of the Cheltenham Festival