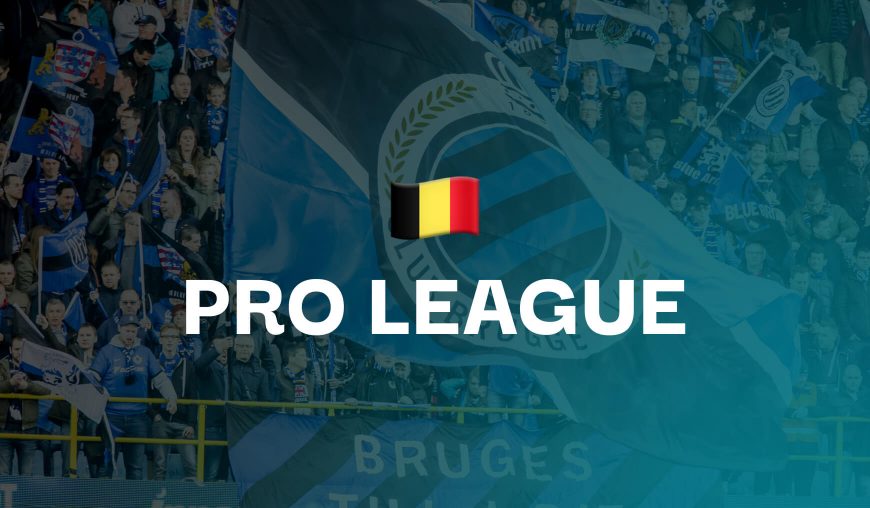 The Sunday Pro League fixtures begin this week with Cercle Brugge crossing the country to face Standard Liege. Both sides finished solidly in midtable last season, and they look set for another season of sitting in the middle, although perhaps looking over their shoulder more than looking up towards the play-off spots.

Liege may well have burgled a point from Gent in the first week of the season, but their performances overall have been pretty dire, with no side conceding more goals or xG across the opening two games. Cercle Brugge meanwhile have started with a win and a loss, losing to newly promoted Westerlo but then beating Anderlecht, although both results were decided mainly by first half red cards, going against Cercle against Westerlo, but then coming to their aid against Anderlecht.

Cercle Brugge were very poor in their opening game, but were much better at home, and their performance last week will certainly give them encouragement. Both sides know that games like this are what will decide their season and will have had this marked down as a potential point-scoring opportunity.

Liege have been poor but have managed to find the net in both games so far, something which is expected when looking at their xG numbers, creating 1.27xG worth of chances across the first couple of weeks. Both of their fixtures have been tough games also, up against sides almost certain to be in the play-offs come May, so this is encouraging, even if the overall level of performance has been slightly underwhelming.

Cercle Brugge were playing reasonably well before the red card in their first game, then completely outplayed Anderlecht even before the Purple and Whites had Ishaq Abdulrazak dismissed in the 34th minute. This game could go either way, depending on if each side can put their best foot forward, but the shaky defences displayed by both sides suggest goals are likely.

For my money, both sides scoring looks the most likely outcome of this tie. Standard have not failed to score yet this season, and I have little doubt that without the red cards Cercle would have found the net in both ties also. Cercle are a little light at the back owing to a couple of injuries, which should allow Liege more opportunities to score, whilst enhancing their attacking threat as the likely replacements, particularly for Senna Miangue are much more attacking-minded.

The second Pro League game of Sunday afternoon sees newly-promoted Westerlo heading to East Flanders, where they will face Gent. Gent are experiencing something of an injury crisis up front, with both of last season’s top scorers Laurent Depoitre and Tarik Tissoudali now ruled out. Tissoudali in particular is a huge miss, his cruciate ligament rupture likely to rule him out for a sizeable chunk of the season, and the question of who can replace his goals and assists has no obvious answers.

Hugo Cuypers and Darko Lemajic are now essentially carrying the goalscoring burden for the entire squad, and though they are not bad options to have, Cuypers will need time to bed in after his move from KV Mechelen and Lemajic looked set to be a back-up who must now step up to the plate.

Westerlo meanwhile got off to a strong start, playing well at home and beating Cercle Brugge, although the game was much more even before an early red card for Boris Popovic in the heart of the Cercle defence. Last weekend they were comfortably beaten by OH Leuven, generating less than 1xG and not managing a single shot on target in 90 minutes.

They are a solid side, and this will not be an easy game for Gent, although they will likely have enough to get over the line, I cannot see this game being anything other than a close-run game. Gent’s defence is among the best in the division, and they will know their ability to grind out narrow wins will be crucial with their best player on the sidelines for the foreseeable future.

Both Teams not to Score is a tempting option, as is a Gent victory, but having under 2.5 goals sitting at odds against is too good to miss. Gent have not been at their best yet this season, and their injury concerns look to ensure they will continue to struggle for the time being, whilst Westerlo are yet to convince me they are capable of taking the game to the biggest sides.

The teatime Pro League fixture has Anderlecht playing host to bottom-of-the-table Seraing. Anderlecht have had a mixed start to the season, putting on a show for their home fans in the opening game, holding Oostende at arm’s length for the majority of the game, getting Felice Mazzu’s time at the club off to a flyer. They were then brought crashing back to earth with a shocker against Cercle Brugge, where they were fortunate to still be level before they received a first half red card, and then never looked like getting back into the tie from that point onwards.

Anderlecht also faced a European fixture in midweek, although they secured a 2-0 win with a heavily rotated team, and the rest afforded to much of the starting XI should mean this has little impact on this weekend’s game. Seraing meanwhile have lost both opening games, although how they managed to lose to Kortrijk last weekend I am still not sure, missing a penalty early on and spurning some great chances later in the game. Even with Kortrijk playing with 10-men for over 60 minutes they were unable to beat Marko Ilic in the visitors’ goal, but this bad fortune is not likely to continue if they can again get the ball into such dangerous areas.

Seraing did show they do possess a decent attacking threat, and they are certainly capable of contributing to the three goals we need for this selection to land. Anderlecht meanwhile have one of the best attacking units in the Pro League, possessing more depth than any other side in the league. Though they underwhelmed against Cercle Brugge, their performance against Oostende is a much better indication of their level this season, and games in this division do not come much easier than Seraing at home.

Though neither of Seraing’s opening games have seen three or more goals, they have both seen xG figures for both teams combined sitting well over three. The way Seraing were dominated by Zulte-Waregem away from home shows the weakness in the squad, and they are likely in for a long afternoon here. If Anderlecht can perform anything close to the level they displayed for much of last season, they will cruise to a comfortable victory here, and should hopefully score all three goals we require for this pick to land on their own.

The final game of matchweek 3 in the Belgian Pro League is an early season top-of-the-table clash. OH Leuven are top of the table, whilst Antwerp are second, and both sides are the only sides to have a 100% record for wins and clean sheets from the opening fixtures.

Leuven have had a relatively easy ride to begin the season, but considering they are expected to be a midtable side, their performances have still been above what I expected of them. Their rejuvenated squad seems to be a significant upgrade on last season, despite net spending of just €585,000 this transfer window. Antwerp meanwhile have brought in experience to help marshal their potential title challenge after a promising start to last season fell apart as the play-offs approached.

Antwerp’s start to the season has been slightly more challenging, but relatively comfortable for a side which expects to be in and around the title picture. They have beaten Mechelen and Zulte-Waregem, though neither win was especially comfortable or deserved. They deserve credit for holding both sides to no goals across 180 minutes, but this game is likely to be tougher. Waregem narrowly avoided a relegation play-off last season, whilst Mechelen are weaker than last season and were outplayed last week by a mediocre Oostende side.

Leuven are a different prospect, although still a side that Antwerp will expect to beat. They are however without Belgian international and former Tottenham centre-back Toby Alderweireld for this tie, who has been a big part of their clean sheet streak to start the year. Leuven have a variety of threats across the forward line, with their four goals this season all coming from different players, and their 3-4-1-2 should allow them to push men forwards against the three-man Antwerp midfield.

Antwerp do have plenty of attacking threat of their own, with last season’s golden boot runner-up Michael Frey leading the line, and already on 2 goals in 2 games so far this season. Frey is ably supported by Balikwisha and Miyoshi across the forward line, and I would expect at least one of three to end up on the scoresheet again today.

In this game I am expecting the clean sheet streaks of both sides to end, with goals for both sides looking the most likely outcome here, especially with Alderweireld’s injury, and how well Leuven have started this year. This will be a test for both sides, and should be a good indicator of how well both sides can expect to do over the course of the 2022-23 Pro League season.

Sign up to Betfair and get a full refund if your first bet loses. Grab an account through the offer below and place £20 on the 5/1 Belgian Pro League Best Bets Accumulator. Here are the two possible outcomes: