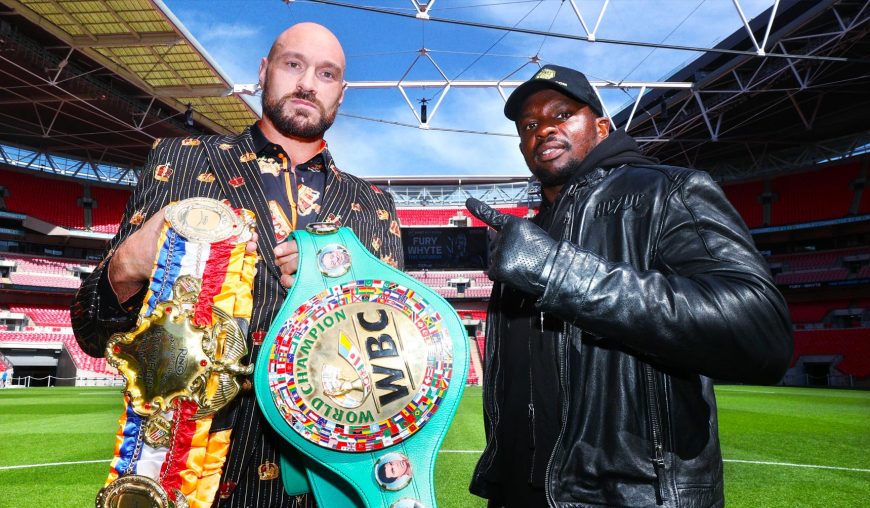 An attendance record is ready to be set on Saturday evening as Wembley Stadium will be host to a sell-out crowd for the biggest heavyweight fight Britain has seen for nearly 30 years.  The turnstiles will be buzzing as 94,000 will be taking their seats to witness Tyson Fury making his second defence of his WBC, Lineal and “The Ring” titles against fellow Englishman and long-time #1 contender, Dillian Whyte.

It is a huge homecoming for the 33-year-old “Gypsy King”, as this is the first time Fury (31-0-1, 22 KO’s) has fought on home soil for nearly four years.  During that time, he has had five fights in the US, including the trilogy with Deontay Wilder and has scored three stoppage wins, two of them against Wilder.  However, one must give a thought as to whether the last fight counts as anything significant when he had already beaten Wilder more convincingly than before?  Although he weighed in today at 18st 13lbs (265lbs) which is lighter than the last two Wilder fights, it is possible he could be a shade past his best.  Over the course of Tyson’s career, he has come through many adversities, having been knocked down eight times, five of those occasions within the first four rounds.  It shows he has always found a way to win, yet I feel Whyte represents a very different test.

This overdue shot at the title for Whyte (28-2, 19 KO’s) has come after nearly 4 years of being the mandatory contender for the WBC title, except a brief seven-month hiatus when avenging his shock defeat by Alexander Povetkin.  During that time, he has scored good wins over Lucas Browne, Robert Helenius, Dereck Chisora twice, Oscar Rivas and Joseph Parker, all solid contenders at the time.  This stacks up very well against Fury’s wins over Otto Wallin, Tom Schwarz, Francesco Pianeta and Sefer Seferi.  On the minus side both of his defeats have come by stoppage, against Povetkin and Anthony Joshua.  The Povetkin stoppage was from a howitzer of an uppercut, and Joshua was a far more aggressive fighter than he was then.  Weighing in today at his usual mark of 18st 1lb (253lbs) , he is the heaviest man Fury has fought in over 11 years.  One must question if Fury has the requisite power, which troubled Wilder so often, to really shake up Whyte.  That question will be answered tomorrow evening.

These key points bring me to several conclusions.  Fury could well get knocked down and early, and possibly stopped.  Fury could simply play safe and nullify the dangerous punching of Whyte and win on points, or maybe wear Whyte down and force the stoppage late.  There is nothing clear to pin your hopes on with absolute confidence, but there are three of the special bets offered by Paddy Power worth considering adding some spice to your viewing of what promises to be an intriguing, and possibly thrilling contest.

My boxing expert has picked out the following bets 👇🏼

Sign up to Paddy Power and get a full refund if your first bet loses. Grab an account through the offer below and place up to £30 on the Tyson Fury v Dillian Whyte fight. Here are the possible outcomes if you took the higher odds bet at 17/1: