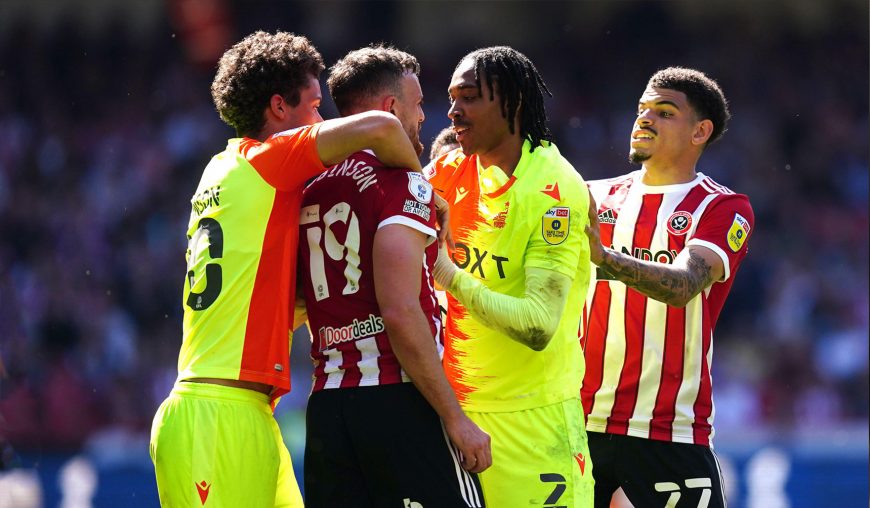 After a successful bet builder in the first leg of this fixture. It would be rude of me to have a look through all the season’s statistics for both these sides again and try to piece together my top 3 bet builder tips for success in the second leg. As well as that I have also put together the usual pre-match cheat sheet along with predicted lineups for anyone looking to place these and any other bet on this match.

Nottingham Forest established a strong 2-1 lead from the weekend’s opening fixture at Bramall Lane and will be looking to book their spot at Wembley when the Blades travel to the City Ground on Tuesday. However, the task will be more difficult than it could have been as Sheffield managed to find a late goal through Sander Berge in the 91st minute to bring some hope into the second leg.

Forest’s form at the City Ground is very impressive. Their home winning streak stands at seven matches, scoring a total of 22 goals in the process and with them entering this match with a lead over their opponents this could potentially be a monumental task for Paul Heckingbottom’s side.

After their win last night, we now know whoever finishes victories in this leg will face Carlos Corberan’s Huddersfield Town at Wembley in the most valuable single football match in the world. Both sides will be desperate to feature in this fixture and keep their hopes of Premier League football alive next year, so this game should be very interesting.

In the first leg of this fixture, we backed over 3.5 cards as one of the selections in the winning bet builder. This landed very easily with referee Andre Marriner producing 5 yellow cards before the halftime interval. Unfortunately, with a total of 7 cards being shown in the first leg, the odds for 3.5 cards in this match has been reduced significantly. However, there is still very good value in card bets for this fixture.

Nottingham Forest’s opposition averages an incredibly high 2.89 yellow cards per game the most of any team in the league by some margin. So, Sheffield United to receive the most cards at 1.73 definitely seems like a viable option. Especially considering that Sheffield are trailing and will likely need to play more aggressive than their opposition to progress to Wembley. However, I am slightly tentative to tip this selection as Forest themselves average a high number of cards and it wasn’t till the 93rd minute that this selection landed in the previous game with a George Baldock booking.

This still suggests that the chances of Sheffield picking up several cards in this match is very likely. Which was the case in the two previous meetings between these sides where Paul Heckingbottom’s side received 4 cards. Equally, in the previous 7 meetings between these two sides the game has seen at least 4 cards, with 6 producing the 5 required for success with this selection. If this trend continues then this selection has a high probability of landing, especially when taking into account the importance of this game for both sides.

Both teams averaged 1.9 yellow cards per game in their league campaigns. An average that if met by both teams will fall just short of success in this selection. However, when coupled with the added intensity of this fixture with Playoff second legs seeing a high number of cards as well as Forest’s opposition’s tendency to pick up a number of cards this selection should land with little resistance.

Over 4.5 cards in this fixture is priced at 1.57 on Paddy Power and if successful this selection will offer a nice boost to the overall odds of this bet builder.

Sheffield focuses a lot of their play down the wing often finding themselves in positions to cross the ball, they also take a high number of shots per game with 3.5 of them being blocked per 90. As a result, it is hardly surprising that they averaged the 4th most corners per game in the league this season at 5.83. If they reach this average in this fixture, then the selection will land with little resistance as it did in the first leg when they took 8 corners.

I also expect Sheffield at times to play for corners in this game, this is because set pieces were a hugely valuable part of United’s attacking outlet in the league campaign with just under 20% of their total Championship goals coming from set-pieces and with them entering this match with a goal deficit they will attempt to capitalise on any opportunity they can to create chances.

Another promising stat from their league campaign is their average corners per game when playing away from home. Although this is slightly lower than their total average, 5.57 is still more than enough for success with this selection and the 128 corners they took in their 23 away games is the joint second-most of any team in the league.

Sheffield United to take 5 or more corners in this fixture is priced at 1.73 on Paddy Power and with the sides season average coupled with the comfortable success of this selection in the reverse fixture, this seems to be a very good option with surprisingly high odds.

Brennan Johnson to Score or Assist

In his last 12 games for club and country, Brennan Johnson has been in the form of his life recording 6 goals and 5 assists whilst securing a goal contribution in 8 of those fixtures. This is a very impressive stat but coupled with the fact that Forest failed to score in 2 of the 4 games without a Johnson goal contribution suggests that if Forest scores the young Welshman has more often than not grabbed himself a goal or assist.

Johnson has performed to a high standard not just recently, but across the season as he has been one of the standout players for Steve Cooper’s side and a staple of the squad. Playing in all 46 of the team’s Championship matches in the campaign and averaging 85 minutes per match.

Johnson is the most productive player in the league for Forest in front of goal and supplying his teammates, with him finishing with 16 goals in the campaign and recording 10 assists. His 26 goal contributions sit well above his peers as the next highest Lewis Grabban, has 10 less than the Welshman having recorded 16. As a result, it is clear to see that a lot of the attacking play for Forest centres around Johnson with the team having 73 goals in the whole season Johnson contributes to just over a third of them.

Unsurprisingly, Johnson scored in the first leg and I expect him to contribute in this fixture as well. Brennan Johnson to Score or Assist is priced at a healthy 2.3 on Paddy Power and if successful it should offer a strong boost to the overall odds of this bet builder.

Sign up to Paddy Power and get a full refund if your first bet loses. Grab an account through the offer below and place £30 on the 6/1 Nottingham Forest v Sheffield United Bet Builder. Here are the two possible outcomes: