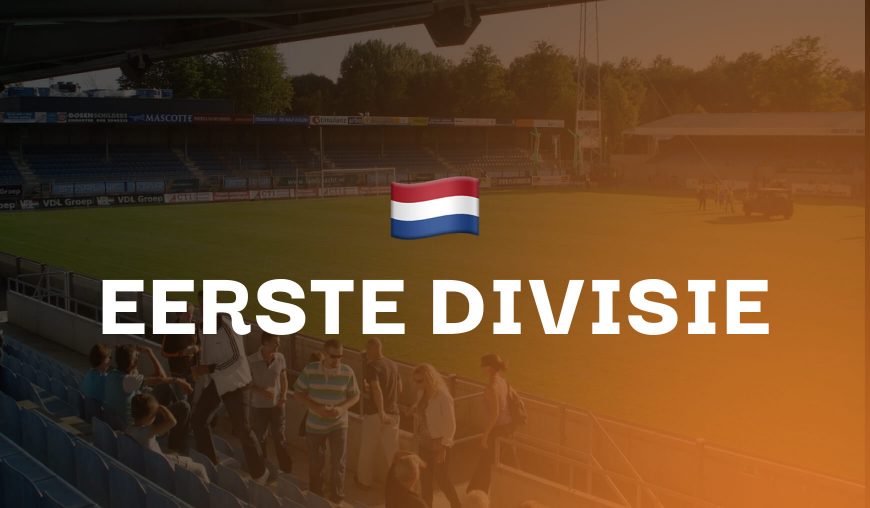 This Friday is the last round of the regular Eerste Divisie season and there are still a few teams with something interesting to play for. NAC Breda is one of them. They need a point to be certain to go into the play-offs, but even with a small defeat they seem safe. They have generally been good since crowds returned to the stadium, but had a few inexplicable glitches, like the 4-0 at bottom of the table Helmond Sport and the home defeat against FC Dordrecht. With the latter, it wasn’t as surprising, as Dordrecht has improved tons in the second half of the season.

With Excelsior, NAC are facing a team they could meet again in the play-offs and a team that dropped their level substantially in the past months. Excelsior had one of the most feared attacking forces, with Thijs Dallinga as league top goalscorer, but the third team from Rotterdam failed to win any of the last five games. Their biggest problem, however, has been the defence, as they conceded 13 goals in those last five games and this game might be even more problematic.

Excelsior will again be without captain Redouan El Yaakoubi, but also Siebe Horemans, as both are suspended for accumulation of yellow cards, so that’s two of their starting defenders out for this game. NAC are better at home than away, but should still be capable of getting the result they want against Excelsior, who are mostly trying to stay fit for the play-offs.

Another team with everything to play for are Almere City. They had a terrible first two-thirds of the season, but they really picked up in the past months and are still in the running to sneak their way in the play-offs by winning the fourth phase of the league. For that to happen, they need to make up a point on FC Eindhoven and keep several teams behind them, so a victory is key here.

They play one of the weaker teams in the league with Jong AZ, so Almere will fancy their chances of doing their part. The thing with Jong AZ is that they are generally a team who create very few chances, but are also pretty well organised. They don’t really give away space, chances and concede a few goals. They are in fact the least conceding team in the bottom half of the table, but at the same time the least scoring team in the league.

Almere are in decent form, but the pressure is on. If results in Volendam, where Eindhoven are playing a tough away game against the already promoted FC Volendam, go their way, that pressure will mount even further. And even though Almere have found the goal easier in the past months, they are still far from the most scoring team in these months. I don’t think Almere will be playing all-out attacking with so much at stake (unless they concede an early goal) and Jong AZ is not the type of team to do that either, so I don’t expect a goal fest here.

Jong PSV against FC Dordrecht is one of those games with nothing at stake anymore. Both teams will finish bottom half of the league and end their season after this match. Jong PSV seem to have a bit more to play for, as players are still keen to impress manager Ruud van Nistelrooij and may still be eyeing a spot with the first team for the final games of the season, but that first team is also their problem for this game.

Because the first team have several injuries and are playing on Sunday, Jong PSV are not expected to field their best team. Players like Maximiliano Romero and Richard Ledezma have featured with Jong PSV recently, but will surely be involved in the first team for the Sunday game against Feyenoord. Whether the same will happen for Jenson Seelt and Dennis Vos is unclear. The two defenders have been involved with the first team as well, but didn’t get playing time and two days before Feyenoord, they may still get game time with the academy team.

FC Dordrecht have been a bit inconsistent this second half of the season, but they have some excellent players, including loanee Christian Conteh. The winger only joined in January, but has at times been superb down the line. You’d expect the home side to be fairly motivated, as it will be the last game under van Nistelrooij, before he moves up to become first team manager, but unless Dordrecht really got the holiday vibes in them, I don’t see them cruise past the opponents this game. That’s why I’d bet on Dordrecht at least staying close to Jong PSV.

It is all to happen for de Graafschap, but it looks like they don’t really have control over the outcome. Making up three points and a goal difference of -7 on NAC Breda will give them a sure spot in the play-offs, but that’s highly unlikely to happen. Other than that, they depend on who wins the fourth phase. If that is an already qualified team, De Graafschap are going to the play-offs. But Almere City and FC Den Bosch could sneak in and then de Graafschap’s season is over.

All they can do is hope and play their best, but they are facing a difficult side. Jong Ajax are above de Graafschap in the league table, but as an academy team, they are not eligible for the play-offs. Like with Jong PSV, the first team are still in full fight for the title and have lots of injuries, so players from the academy side feature in the first team as well. It means captain Kenneth Taylor, Liam van Gelderen, Youri Regeer and the three Mo’s (Ihattaren, Kudus and Daramy) will probably not feature here and weaken Jong Ajax substantially. On top of that, Youri Baas will be suspended for this game.

Whether Jong Ajax will be fully motivated with several of the regulars missing is hard to say, but de Graafschap will definitely be up for this game. That’s why I’d give them a decent chance of victory in Amsterdam.

This is another match with two teams who have nothing to play for. But both teams are finishing the season in a fairly good mood. TOP never really challenged for the play-offs, but with three wins from the last six games, the need to prove themselves at the end of the season is gone. Two of those victories came in tough away games against promotion candidates, but last game against NAC Breda they gave away a hint of being done with the season. The attitude wasn’t the same, and especially after conceding, they seemed to give into defeat very soon.

MVV have improved substantially since they sacked manager Klaas Wels and replaced him with Maurice Verberne, with two wins and only one defeat in five matches. Like TOP, they don’t really have anything interesting to play for in this league, but the manager would still be eyeing a contract for next season and finishing the season well would really help his case.

I suspect the difference in motivation will be visible, so I’d eye the away side to get a result here, but MVV also hasn’t given me much reason to really get carried away, so I give them a decent handicap to win this bet.

Sign up to Betfair and get a full refund if your first bet loses. Grab an account through the offer below and place £20 on the 5/1 Eerste Divisie Best Bets Accumulator. Here are the two possible outcomes: