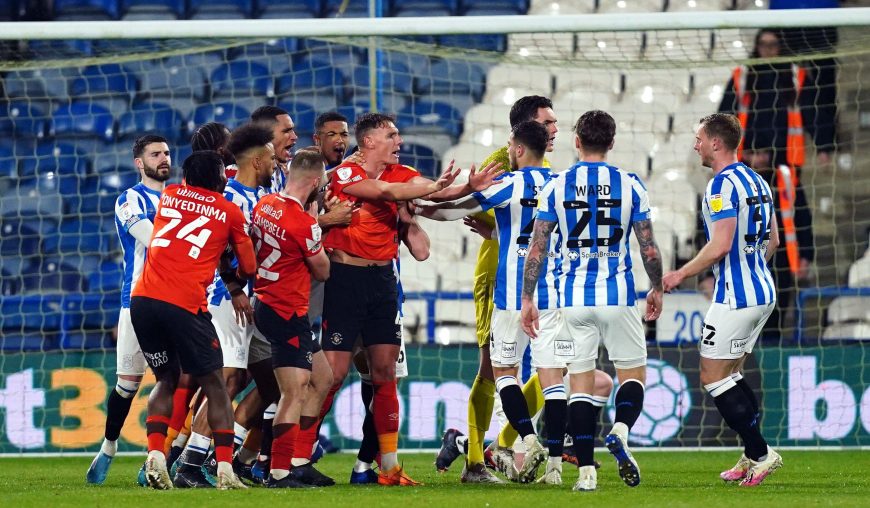 The greatest financial prize in football is at stake and for Luton Town their first chance to reach the Premier League. Huddersfield have been here recently, albeit only Jonathan Hogg remains from the squad that reached the 2016/2017 Championship play-offs under David Wagner. To get you clued up for Friday’s action, I’ve selected my top 3 Bet Builder Tips and a Cheat Sheet.

Both teams are surprise contenders. Chalked up as more likely to be relegated than promoted at the beginning of the season, it is a triumph for Nathan Jones & Carlos Corberan and their staff to have led their teams to the playoffs.

Luton suffered at the hands of free scoring Fulham losing 7-0 in their penultimate fixture. This could have been damaging for the mentality heading into the playoffs, but a 1-0 win at Reading in the final game of the season would have dispelled doubts around The Hatter’s promotion hopes.

It’s been just 8 years since Luton fans were suffering in the 5th tier of English football and decades since they were last seen in the top flight. Their visitors Huddersfield were last seen in The Premier League just four years ago. However, their brief stint there followed a similar lengthy absence from the top flight since 1972.

Huddersfield have had a far steadier run in to the playoffs. They’ve won 5 of their last 6 games in the league and only lost 2 games in 2022. If it weren’t for Luton’s home advantage on Friday it would be hard to look past them as favourites based on form. The Championship playoffs are ruthless fixtures that don’t always see the best team win, so both teams will fancy their chances regardless of their league results.

Allan Campbell to be Shown a Card

Both teams are well organised but have no doubt, the midfield could be a fierce battle. Luton are still missing the physical presence of Pelly-Ruddock Mpanzu, but the box-to-box skills of Allan Campbell have been compensating for that loss admirably in recent weeks. The Scotsman is talented enough to pop up with the odd valuable goal but of late he has been the Luton player challenged with covering the ground and stopping attacks building through the middle.

This has led to Campbell racking up more fouls recently, including 5 in one game vs Blackpool recently. Campbell also conceded 2 against Huddersfield in April and will be in the engine room against Lewis O’Brien who is the player who has drawn by far the most fouls for Huddersfield, 21 in the last 10 matches. He is the value in the market at 4.5 for a yellow card.

Prediction: Allan Campbell to be Shown a Card

Campbell might not be the only one in trouble with the referee on Friday night. There tends to be quite a high number of yellows when these two teams clash. Both league meetings saw 5 yellows dished out, with 4 and 6 coming in their meetings in 2020/21.

The size of the occasion for both teams will put pressure on the referee to keep control of the game. Both teams have sold out their ticket allocation for this fixture and if either set of fans think there has been wrongdoing against their players, he will be politely made aware of it. Therefore, I also like over 3.5 yellows in this match at 1.57.

Cameron Jerome to have 2+ Shots

Finally, the absence of Elijah Adebayo definitely makes a difference to Luton’s attacking outlook. Cameron Jerome, at 35, isn’t quite as quick or mobile as he used to be, but he’s still a very capable forward who will be leading the line for Luton.

Jerome has the highest shots per 90 number in the whole Luton squad. Obviously, he hasn’t been used as extensively when Adebayo has been available, but he struck 4 shots in the last game against Reading.

Luton will be expected to be the aggressor here at home in front of the Kenilworth Road faithful. If they are able to fire off a number of shots, and performance data suggests that Huddersfield tend to concede more shots than they take, then you have to feel confident that Jerome will take his fair share.

He is priced at 1.5 to take 2 or more shots in the match which seems a fair price.

Prediction: Cameron Jerome to have 2+ Shots

Back the 8/1 Luton v Huddersfield Bet Builder below ⬇️

Sign up to Paddy Power and get a full refund if your first bet loses. Grab an account through the offer below and place £30 on the 8/1 Luton v Huddersfield Bet Builder. Here are the two possible outcomes:

How to watch Luton v Huddersfield in the Championship play-off