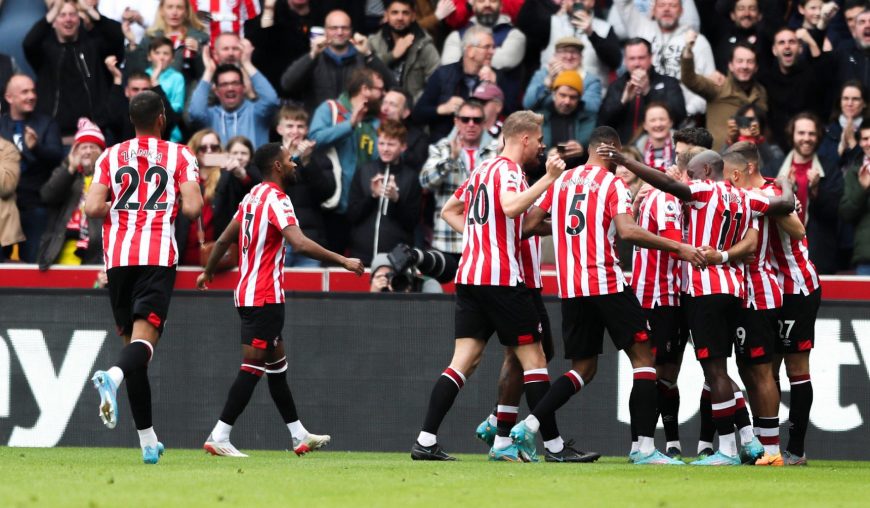 There’s some more Premier League action to keep you occupied on Monday night, as Manchester United host an in-form Brentford side. Manchester United are aiming to maximise their end of the season run-in by clinching the best European spot possible after top-four looks unlikely. Brentford, however, look to end the season on a good note after hitting a run of form. They don’t have to worry about relegation, so they are aiming to climb as high up the table as they can. Here are my bet builder predictions for a game that can swing either way.

Manchester United are currently in 6th position. They are two points behind 5th, but have played two more games, and they are three points ahead of 7th, also playing one more game. With 5th position or higher looking unlikely, The Red Devils will want to make sure that they don’t drop lower than 6th in the league, as potentially not achieving any form of European football would be detrimental for the club.

Brentford are comfortably in 14th place in the table. They are only one point away from 12th, showing their opportunity to still climb a few places as the season concludes. They are six points from 16th, so as long as they continue their good, recent form, they shouldn’t have to look over their shoulder in the table.

United have only won two of their last eight games, showing their poor dip in form. This contrasts with Brentford, who are unbeaten in their last four. The Bees’ recent fixtures have seen them take points against Chelsea, Tottenham, and West Ham, which will cause United some worry. However, United have the 4th best home form in the league, as they have won nine of their 18 home games this season which will give them a confidence boost. With Brentford only winning five of their 17 away matches this season, this may cast doubts on their minds despite their recent form.

With Brentford having the 5th best form in the league in the last eight games, this will make a good contest with a United side with good home form throughout the season. Seeing as this is the last home game of the season for United, they will aim to close it out with a bang in front of their home fans. Have a look at my bet builder predictions below, as well as the Cheat Sheet, as your Monday night is taken care of.

With this game potentially swinging either way, I’m expecting both sides to get on the scoresheet as both sides will show their competitiveness in this fixture. With the reverse fixture ended in a 3-1 win to United, I’m sure that a similar storyline will follow, with Brentford possibly mounting a larger challenge this time around due to their good form.

Manchester United have seen six of their last eight games consist of both teams scoring. This shows the quantity of action that United’s recent games include, as well as their ability to not only score, but let goals in at the back. Brentford, despite picking up points, have been victim to both sides scoring as well with four of their last seven games adhering to this. With both sides seeing goals at both ends of the pitch in recent fixtures, I’m expecting this trend to continue when they face each other.

In terms of goal averages, United score 1.61 goals and concede 1.22 goals when at home. Brentford score 1.35 goals and concede 1.76 goals when playing away. Looking at these averages in a bit more detail, it can be expected that there will be goals at both ends. However, with United being prone to scoring more, and Brentford conceding more than they put away, the stats suggest that United could well get the better of their visitors from London.

65% of Brentford’s away games this season have seen over 2.5 goals. With the frequency of goals that are included in their games, this suggests that we can see a good amount of action at Old Trafford. A good number of goals will enforce the idea that they can be distributed between both sides, supporting the both teams to score selection. United’s last four consecutive home games have seen both teams score, so despite their shaky form, this is a trend that I expect to continue against Brentford.

Manchester United to Receive the Most Cards

Looking at how the game will unfold, I’m led to believe that despite the result, Manchester United will be the side that picks up the most cards.

Firstly, form will be a huge factor in this selection. Quite simply, Brentford have been shocking top-quality opponents and producing good results, whilst United are struggling to pick up wins despite how crucial points are for them in the table. Because of this, more pressure will fall on United to deliver, as not only are they the less in-form side, but it can be argued that points are more valuable to them at this stage of the season. With the pressure affecting the players, frustration and desperation can lead to a more reckless style of play, which can see United players picking up cards.

Secondly, United have a few issues with injuries. With the likes of Pogba, Cavani and Shaw unavailable for selection as well as other first team stars, this has meant that youth players with small amounts of professional experience will be relied upon to fill places on the team sheet. This is reinforced with debuts being offered to United youngsters in recent fixtures. Therefore, if Rangnick is required to depend on his cavalry of youth players on the bench, their inexperience can lead to them being caught out on and off the ball, leading to a high potential of bookings. This is reinforced with Hannibal Mejbri making an appearance against Liverpool, as the youngster came on in the 84th minute, lost the ball which led to Liverpool scoring their fourth in the 85th minute, and picking up a yellow card in the 88th minute.

Prediction: Manchester United to Receive the Most Cards

Scott McTominay to be Shown a Card

A key stat that I came across is that United have conceded in 14 of their 18 home games this season. This supports the idea that they are weak at the back. With McTominay often providing help to his teammates in defence, he is also a culprit of the poor defending that has led United to concede often at home. With this seemingly expected to continue against Brentford, this provides the United defence with more hard work to take care of, meaning that McTominay will be drafted in for even more help. With Brentford, in their promising form, being well motivated to get on the scoresheet, they will back themselves to advance through the United team to score as many goals as they can. Because of this motivation and the likelihood that Brentford will make a good amount of attacking advances, this increases the workload for McTominay to put a stop to whatever Brentford attacks he can, probably making some fouls along the way.

With McTominay’s reckless style of play, he isn’t afraid to get stuck into some challenges, and aggressively defend when he’s required to. His old-fashioned tackling approach sees him fly into challenges, which can sometimes end badly for the Scot. His average of committing 1.96 fouls per game has led him to acquire nine yellow cards this season. With the double figures mark approaching, I feel like he is likely to achieve this against Brentford as his defensive services will be required against a high-flying Brentford side.

Prediction: Scott McTominay to be Shown a Card

Back the 7/1 Manchester United v Brentford Bet Builder below ⬇️

Sign up to Paddy Power and get a full refund if your first bet loses. Grab an account through the offer below and place £30 on the 7/1 Manchester United v Brentford Bet Builder. Here are the two possible outcomes:

How to watch Manchester United v Brentford in the Premier League