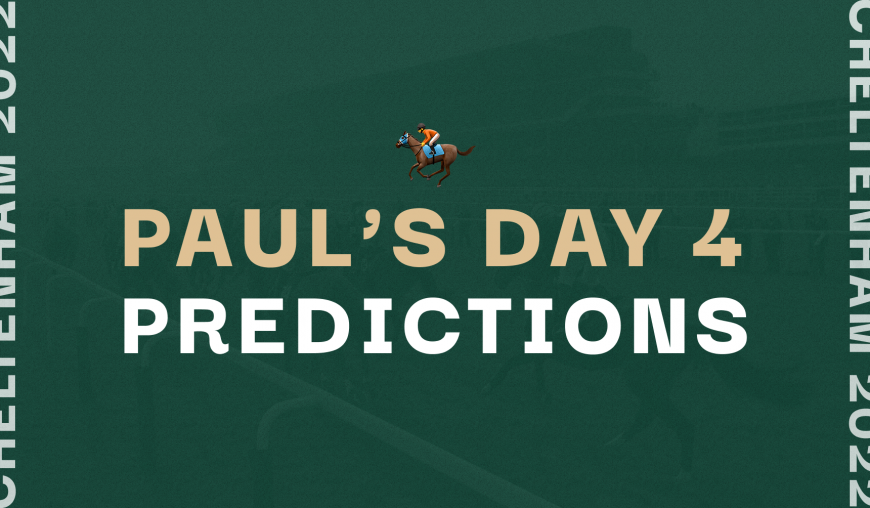 The ground being on the slow side will give Fil Dor every chance of reversing the form with Vauban on their Leopardstown run, along with the fact the stiff finish of the hill will bring stamina more into the equation, something he looks to have in abundance, so he looks a solid bet at the prices with Davy Russell in the saddle.

Il Etait Temps ran a brilliant race on her hurdle debut at Leopardstown given how inexperienced she was going into the race. She closed all the way to the line and with that run under her belt I would suspect there should be plenty of improvement to come so she can run a big race at an each way price.

There has been plenty of talk surrounding the handicap mark that State Man has been given and to me a mark of 141 looks very lenient. He was travelling really well before falling in a Leopardstown maiden hurdle and before that he had been touted as a possible Supreme Novices horse. He won a weak maiden hurdle on heavy ground at Limerick last time jumping much better in the prices and he’s a very worthy favourite here who should go very close.

Colonel Mustard is more of an each way price and he too looks to be on a fair mark. He was no match for both Sir Gerhard & Three Stripe Life last time, but they came out and franked the form in the Ballymore on Wednesday. He’s also finished behind Jonbon this season so although this is a very competitive race, he should run a very solid race.

Henry Daly has always held Hillcrest in very high regard and he’s yet to let him down. He is an out and out stayer, something you need for a test like this as a novice and the fact he has some course form is a big plus. He was very good when winning at Haydock last time, in control of the race a long way from home and I suspect the same could happen again here. Although it’s a field of 19 runners, he looks the standout performer and should take all the beating.

Ramillies would’ve given The Nice Guy who also runs in this a scare at Naas if he hadn’t made a bad mistake at the final flight two runs back. He got off the mark at Punchestown last time and the step up in trip here should bring out more and he can run a good race at a nice each way price.

The feature event of the week looks like another fascinating race this year with reigning champ Minella Indo back to defend his crown. For me, he’s the most likely winner given he looked to win with a little bit up his sleeve last season when beating A Plus Tard. Although he hasn’t been at his best this season, he got back on track at Leopardstown last time when finishing second and Cheltenham seems to bring out the best in him, so I am expecting a very big run.

Chantry House can run a big race at a decent price here. He was well fancied for the King George at Kempton before being pulled up early in the race but got back on track at Cheltenham last time. He looks an out and out galloper so should stay the trip with no issues. If any of the front few in the market faltered, he could be there to pick up the pieces.

Billaway was narrowly beaten in this race last year by Porlock Bay, but he doesn’t show up this year so I feel the race should set up nicely for Billaway to make amends for last season. Connections have put cheek pieces on Billaway to help him concentrate more and he looked to have done that last time at Naas when running out an easy winner. This race would’ve been the plan all year and I think he will take all the beating.

Dubai Quest is a bit of a winning machine in the point-to-point field and although it was on good ground, won really nicely at Wetherby last month. Gina Andrews is a very good amateur rider so her being on board here should help his chances and so I think he can run well.

This race, for me, is all about Mount Ida, trained by Gordon Elliott. She won the Kim Muir at the Festival last season in remarkable fashion, coming from way back under Jack Kennedy to run out an impressive winner. This season she’s won her two starts very nicely and last time she gave Elimay 3lbs and a beating at Fairyhouse so I would expect her to uphold the form with her. Concertista is an interesting runner too but I feel her inexperience over fences may prove costly for her and so Mount Ida is a strong selection in the penultimate event of the Festival.

Adamantly Chosen won the Goffs Land Rover Bumper first time out at Punchestown last season and although it took him three goes to get off the mark over hurdles, he ran out a comfortable winner of a maiden hurdle last time at Thurles. Richie Deegan takes the ride here in a race only for conditional jockeys so that has to be a big plus as Willie Mullins has used him sparingly this season. A mark of 142 doesn’t look to be beyond him and I think can improve again to feature very highly here.

Chemical Energy hasn’t run since last November, but this seemingly has been the plan since he won a race over the same distance at Fairyhouse back then. He finished down the field in the Champion Bumper last season but has always looked like he would make a fine horse jumping. Gordon Elliott is brilliant at targeting horses at these types of races, and he ticks a lot of the boxes in a competitive race.

Sign up to Paddy Power and get a full refund if your first bet loses. Grab an account through the offer below and place up to £30 on any horse on Day 4 of the Cheltenham Festival. Here are the possible outcomes if you if you back any horse on Day 4:

How to watch Day 4 of the Cheltenham Festival