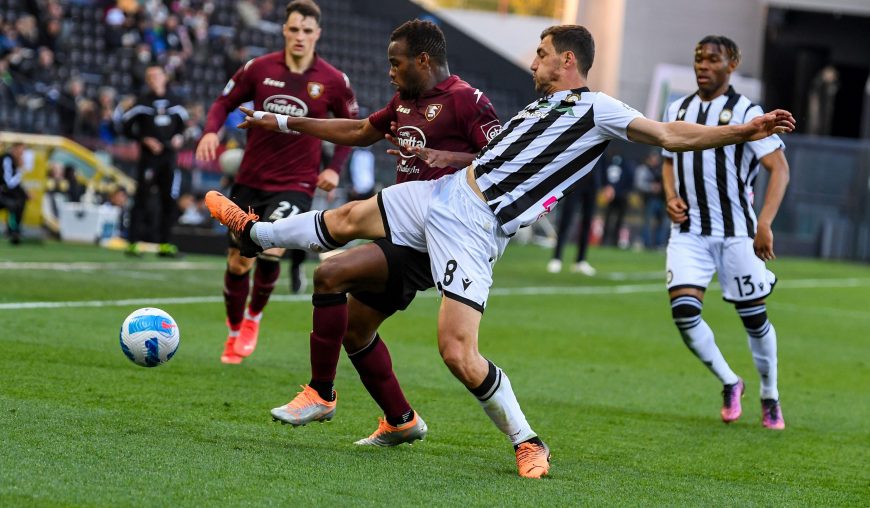 Salernitana’s bid to avoid the drop in these past few weeks has been nothing short of fascinating and has arguably been the most surprising element of the entire Serie A campaign.

Every single fan, pundit and commentator had completely written them off for almost the entire season and did not remotely entertain the idea that they could turn their fortunes around and book themselves in for another season in Serie A.

They had been in the bottom three since the opening game of the season and did not leave it until about three games ago.

To prepare you for this vital game I’ve selected my top 3 Bet Builder Picks and a complementary Cheat Sheet.

The job that Davide Nicola has done is simply incredible. Since the defeat against Roma on April 10, they have won four games and drawn another three. That is why they go into this game against Udinese outside of the relegation zone.

They are on 31 points and Cagliari are on 29. Their head to head record is even after two 1-1 draws so if they end on the same points, Cagliari stay up on goal difference barring a seven-goal swing.

Salernitana come up against an Udinese side that has nothing to play for but has had a very positive end to the season. They are full of confidence and Gabriele Cioffi’s players will still want to impress and enjoy their final game of the season.

Even if just for the sake of final day relegation drama, we have to back both teams to get on the scoresheet.

Given the confidence that is clearly flowing through the Salernitana squad right now and the fact they will be playing at the Stadio Arechi in front of their adoring fans, you have to imagine that they will manage to breach the Udinese defence at least once.

They have actually found the back of the net in their last eight Serie A matches and it would be a surprise if that suddenly stopped on the final day when they really need it.

When it comes to Udinese, over the past few years it would never have made too much sense to back them to score in any game. Since Gabriele Cioffi took over though, they have become a much more attack-minded team who can score against almost anyone.

They currently sit 12th in the Serie A table and have managed to score 57 times this season. They know how to concede though, too. Recent high-scoring results include a 3-2 loss to Spezia, a 4-0 win over Fiorentina, a 4-1 win at home to Empoli and a 5-1 win over Cagliari.

Given the drama of the day, the incredible atmosphere that will be generated in Salerno, and the way the two teams have gone about their final quarter of the season, there should be goals. Both teams to find the net is available for odds of 1.57.

Salernitana are a team that is playing as more than the sum of its parts right now. They lack superstars and to be quite frank, the squad on paper should not be good enough to stay in the division.

The man who has led the way in attack though is Federico Bonazzoli. He has netted 10 times in Serie A this season which is a respectable tally for a forward in this team.

When you look at where he has scored, only two of his goals have come in games where the Granata have lost. That was against Bologna early in the season and in a 4-1 loss to Napoli.

He scored the equaliser in their 2-1 win over Venezia early in the campaign as well as equalisers against Genoa and Cagliari which were vital points against relegation rivals.

He scored in big draws against AC Milan and Sassuolo, bagged the winner in a huge victory against Fiorentina that got their survival bid going, and scored against Empoli last weekend.

He is scoring when it matters this season and that could be an extremely valuable thing for Davide Nicola heading into the final game of the season where a win would guarantee safety.

An important player in midfield lately has been Ederson but unfortunately, he is suspended and will not be able to aid Bonazzoli in attack. That aside, the Italian will surely be desperate to bag one more vital goal and be the man who has his name pinned on this incredible fight for survival.

He is often used off the bench by Davide Nicola for his impact but it is widely reported that he will be given the start against Udinese. The front man to find the net is available for odds of 2.75.

Gerard Deulofeu to Score or Assist

One of the players that has been really leading the way for Udinese in the second half of the season under Cioffi has been Gerard Deulofeu.

He has had an unusual career in which he hasn’t had a huge amount of success but has often shown himself, at times, to be an incredible footballer.

He is in one of those patches right now where you look at him and think ‘why aren’t you at a bigger club?’. The Spaniard has scored 12 times in Serie A for the Friulians this season and has also assisted five times.

He is the man that Salernitana simply have to keep under wraps if they are to get what they need from the game at the Arechi.

Given his form, he is expected to start the game in attack and will be linking up with Ignacio Pussetto.

One of Udinese’s main strengths is their fullbacks, Nahuel Molina and Destiny Udogie. It is Deulofeu who tends to bring them into play and then gets into the box to see what he can get on the end of.

As well as that, he is an adept set-piece taker which is always great when backing someone to get an assist. He’s performed on big occasions before and he could be the primary source of trouble for Salernitana. To add to his contributions tomorrow comes in at 2.75.

Back the 5/1 Salernitana v Udinese Bet Builder below ⬇️

Sign up to Paddy Power and get a full refund if your first bet loses. Grab an account through the offer below and place £30 on the 5/1 Salernitana v Udinese Bet Builder. Here are the two possible outcomes:

How to watch Salernitana v Udinese in the Serie A