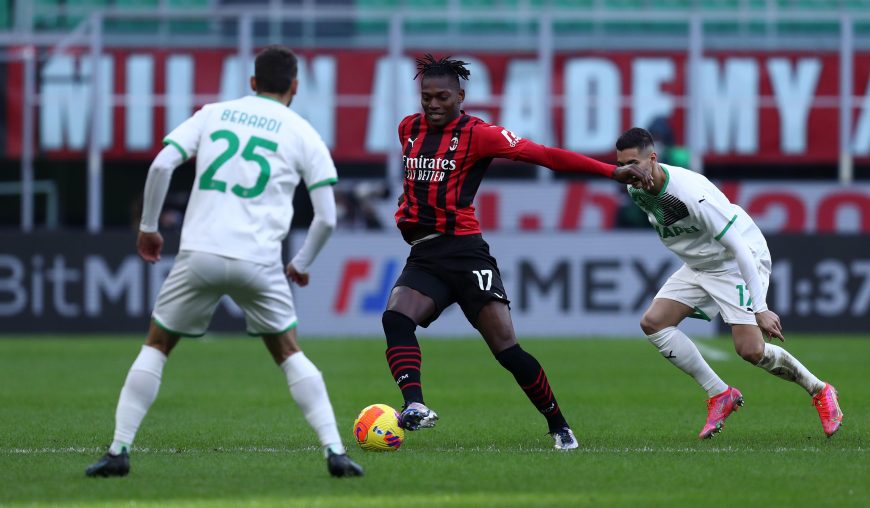 Only Sassuolo remain standing in AC Milan’s way as the Rossoneri are closing in on their first Serie A title since 2010/11. Coming into the final day of the season, AC Milan know that even a draw at the Mapei Stadium on Sunday will see them crowned Italian champions. To clue you up for the title race I’ve selected my top 3 Bet Builder Picks and prepared a Cheat Sheet.

With Inter hosting Sampdoria at the same time (5:00PM BST), Milan know that the title is theirs unless they fall to a surprise defeat against the Neroverdi and Inter get the job done by beating Samp in Milan.

Only Sassuolo is a harsh way to introduce Alessio Dionisi’s side, though, and Inter can remain hopeful despite their slim chances of retaining the title on the final day. Both title contenders know how tricky the Emilian side can be to get the better of, with each having fallen to defeats against them. As well as that, Sassuolo have beaten Atalanta, Fiorentina, Lazio, and even Juventus this season.

The trip down to Reggio Emilia, then, doesn’t appear as easy as it might have seemed for Stefano Pioli’s side. But it should be noted that Sassuolo recently shipped six away at Napoli as their season, to all intents and purposes, finished a few weeks before the campaign’s end.

Milan will enjoy the bulk of the support at the Mapei as well. As many as 100,000 Rossoneri fans overwhelmed Sassuolo’s website in an attempt to buy tickets earlier this week, and 18,000 proved successful in their attempts, giving the visitors the majority of the support at the 21,525 venue.

Although AC Milan’s likely title win will be remembered as a team effort from an excellent group knitted together by Pioli, a handful of individuals have shone brighter than the rest. Rafael Leao is very much one of those deserving of extra credit – alongside goalkeeper Mike Maignan, defenders Pierre Kalulu and Fikayo Tomori, and Sandro Tonali in midfield.

There aren’t many players like the Portuguese operating in Europe’s top five leagues, and there are few who manage to deliver excitement and fun to neutral viewers on as regular a basis as Leao does.

Always playing with a smile on his face and keen to enjoy his football, Leao is direct, daring, and a nightmare to try to handle. Playing on Milan’s left, he’s often helped by Theo Hernandez steaming forward from left-back in an attempt to overlap and give opposing defenders a torrid time.

Both Leao and Theo were on the scoresheet as Milan beat Atalanta 2-0 at home to go within a point of the title last time out, and that was despite Gian Piero Gasperini attempting to counter their threat by putting Hans Hateboer, Marten de Roon, and Teun Koopmeiners on that side of the pitch to handle them.

Sassuolo are expected to have Giorgos Kyriakopoulos at right-back, and Domenico Berardi in front of the Greek isn’t a player who always offers the most defensive cover. That considered, Theo and Leao could have space to exploit at the Mapei, and the No.17 is as dangerous as anyone in Europe with open open green grass to run into, so Paddy Power offering odds of 1.67 for him to score or assist anytime appears to be good value.

Although he doesn’t always contribute as much as he might at the back, Domenico Berardi is a contender for any Serie A Team of the Seasons being drawn up in the coming days, and he has history against Milan that Rossoneri fans won’t want reminding of.

Of his 120 goals for Sassuolo – which have impressively come in just 324 appearances – he has scored 10 in 16 appearances against Milan, adding another four assists on top of that. His finest performance to date came back in January 2014, scoring each of the Neroverdi’s four in a shock 4-3 win for the then-newcomers to Italy’s top tier. His performances have been so good, particularly against Milan, that he’s being linked with joining the seven-time European champions in the summer, which would see him play in the Champions League next season.

This season has seen him at his most consistent, seemingly taking new life from helping Italy to their European Championship success last summer. In 32 appearances this term he has scored 15 times and provided an astonishing 17 assists on top of that.

Operating on Sassuolo’s right but with license to roam to find space, he should need to go far on Sunday coming up against a full-back who loves nothing more than to attack in Theo Hernandez. While the Frenchman will threaten Sassuolo, Berardi gives even greater cause for concern to Pioli, and the No.25 to score or assist anytime at 2.8 on Paddy Power is an irresistible offer.

Sassuolo have been a bit of a thorn in the side of each of the Milan clubs in recent years, and their games against the Rossoneri tend to provide entertainment and, as an extension of that, goals. Each of their last four games against Milan have seen both teams score and over 2.5 goals be scored, with Sassuolo winning 3-1 this season and 2-1 last season, and Milan winning the previous two games 2-1 themselves.

Curiously, each of Milan’s last two wins against Sassuolo have come at the Mapei Stadium, while Sassuolo’s two wins came away at the Stadio San Siro.

As much as Alessio Dionisi might find his side’s defensive efforts maddening – not keeping a clean sheet since their 2-0 win away at Inter in February – they tend to make up for that at the other end of the season. Just once in their last 11 games has a clean sheet been kept, and that came in a shock 1-0 loss away to Cagliari last month.

Milan are a stark contrast to Sassuolo, and they’ve been an example of consistency and solidity for most of their title charge. They haven’t, though, faced too many sides with as much of a commitment to attack as the Neroverdi, and they did concede chances against Atalanta last week that La Dea should have made more of. Although the Rossoneri don’t tend to ship too many goals, Sassuolo’s involvement makes odds of 1.4 for there to be over 2.5 goals an offer that has to be taken seriously

Back the 4/1 Sassuolo v AC Milan Bet Builder below ⬇️

Sign up to Paddy Power and get a full refund if your first bet loses. Grab an account through the offer below and place £30 on the 4/1 Sassuolo v AC Milan Bet Builder. Here are the two possible outcomes:

How to watch Sassuolo v AC Milan in the Serie A