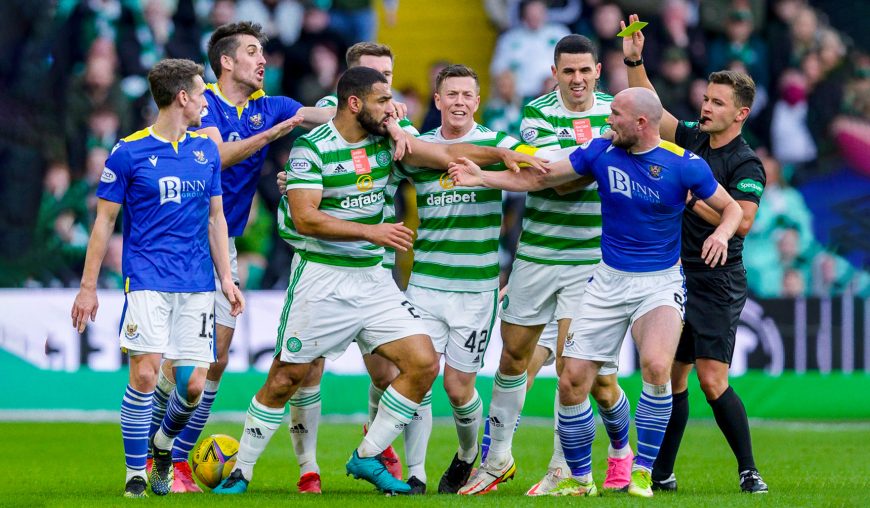 Here we go, it’s the semis of the League Cup and we’ve been given an absolute treat of a draw. Holders and cup specialists St. Johnstone face an in-form Celtic while an at the time of writing manager-less Rangers face a Hibs side that haven’t kicked a ball in three weeks or won a game in nearly two months. Bring. It. On.

I’ll do my best to be sat in front of the telly for both games this weekend and with the way in which the refs in Scotland have been handing out cards this season, the two ties could be excellent for some cards bets given the extra spice a cup semi throws into the mix. Refs in Scotland have been giving out 4.58 cards a game this season, one of the best rates in Europe and a massive increase on last season’s rather paltry tally of 3.28 and I’m expecting both of Nick Walsh (Celtic v St. Johnstone) and Kevin Clancy (Rangers v Hibs) to be dishing them out this weekend.

The Saturday evening game pits Ange Postecoglou against last season’s cup double winners and could we see the Saints record yet another cup win? This is a great opportunity for Postecoglou to record a first trophy in Scottish football though, and he probably boasts the side in best nick heading into these semi-finals.

This is the second meeting of the season between these two sides and the first should be a good indication of how this tie will infold. There were a whopping six yellows (five of which for the men from Perth) in what was a hotly contested game that Celtic eventually won 2-0 at Parkhead. Guess who was in charge of that cards-fest? 10 points if you guessed it was Nick Walsh, the man in charge of this one too. One of those five Saints cards was given to Cammy MacPherson after less than half an hour and though he’s usually a shoe-in for cards betting (and one to keep in mind for future selections) his cup-tied status rules him out this weekend, though it does open a Murray Davidson-shaped door.

Davidson is a bit of a nutter in all honesty, and should he be given the start he’d be one of my favourites to get himself into Walsh’s book. He’s picked up three Premiership cards in just seven games and he does look as if his advancing years are catching up with him, meaning he doesn’t quite have the legs to get round the centre of the park in the same way he used too.

St. Johnstone love a card so I won’t just be focussing my attention purely on Davidson on Saturday. Whoever plays right wing back for the Saints will find themselves in for a tough evening at Hampden too. It will likely be the returning cup titan that is Shaun Rooney and he does look a tad short for a card but coming up against the incredible Jota will do that to a full back’s booking price. Jota is a nightmare and if you need convincing of that have a look at the highlights from their win at Dundee prior to the international break. The Portuguese tore Cammy Kerr to shreds, to the extent Kerr could hardly lay a finger on him to stop the 22-year-old. Rooney is far better than Kerr but should still struggle against Jota.

Should Michael O’Halloran get a start in Rooney’s place (as he has been of late) he looks big for a card, just be wary he’s a pretty sure sub risk. It might also be worth keeping an eye on Saints keeper Zander Clark in-play should his side be ahead and he’s in a time-wasting mood. While it will likely be a case of how many rather than pin-pointing specific Saints players for cards, I would be shocked if Celtic rack the yellows up so just be wary to not include too many Celts in your bets.

Players to watch for a booking

The second semi looks fascinating and even though I don’t fancy picking a winner after the last few weeks at both clubs, I can certainly envisage a few cards being dished out on Sunday afternoon. Rangers have obviously lost Steven Gerrard (and a worryingly large amount of Gerrard cardboard cut-outs) while Hibs have hardly kicked a ball since October thanks to a covid outbreak. To say this – and the other semi, really – are finally poised would be an understatement.

Immediately my eyes are drawn to two players: Ryan Porteous and Alfredo Morelos. It probably doesn’t take a genius to pluck those two out as solid shouts to be in bother on Sunday afternoon. Porteous has a sordid history against Rangers and his domestic record this season is frightening. He’s managed five yellows and a red (against Rangers) in just nine games this campaign. He’s certainly not popular with the opposition fans or players and will face their wrath this weekend, further increasing his chances of getting in trouble.

Morelos is another that needs little introduction. If you do fancy a nibble on the Colombian to be carded I’d wait for confirmed team news, as he was dropped for the Gers’ last game and never even got on in their 4-2 win over Ross County. That’s probably a fair rule given the managerial change over the international, I’d be shocked if there was wholesale changes but it’s maybe better keeping your powder dry on Rangers players and waiting for the line-ups rather than chasing a bit of value way ahead of kick-off. On that note, whichever of Borna Barisic or Calvin Bassey is preferred at left-back could be a decent outside shout for a card, especially if Hibs line-up in a 4-3-3 with the oft-fouled Martin Boyle on the right wing.

As for Hibs, Alex Gogic and Joe Newell are always reliable for fouls and cards and though both will be short would make for decent additions to doubles and trebles if that’s the route you fancy going down.

Players to watch for a booking