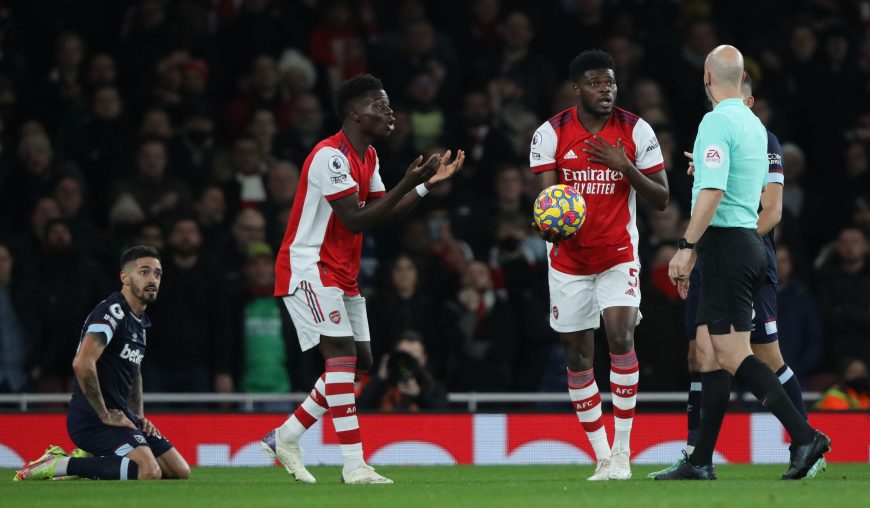 The weekend’s final Premier League game is one worth tuning into. The frontrunner for the top 4 will be a lot clearer after West Ham host Arsenal in a London Derby on Sunday evening at 16:30. There’s only 8 points and a few tube stops between the two clubs, so this will be a close game in a couple of ways. I’ve done the legwork to get you clued up for this top 4 battle hosted by none other than Mike Dean. You can use my top 3 Bet Builder Picks or use the Cheat Sheet to have a crack with your own.

West Ham will be regrouping after their 2-1 loss at home against Eintracht Frankfurt in the Europa League semi-final. They will still have everything to play for against the German outfit in Frankfurt after a first leg that could have gone either way. Similar to their European opponents, their domestic form has suffered while they’ve been touring around the continent. They’ve only managed 2 wins in their last 6 league matches which has seen their top 4 campaign stutter in the latter stages of the season.

David Moyes focus is clearly on Europe which is understandable considering it’s their first European semi-final in 46 years. They’ll be coming into this fixture with selection issues at the back. Craig Dawson’s suspension, Ogbonna’s long term absence, and Diop’s ankle problem means that Kurt Zouma and Ben Johnson will be the last line of defence for The Hammers on Sunday. Considering the lack of depth in key areas such as centre back and centre forward. Moyes might be wise to employ some squad rotation to avoid any further injuries ahead of Thursday’s reverse fixture.

Arsenal on the other hand will be fully focused on the league and in good spirits too. They’ve put away Chelsea and Manchester United back-to-back after a run of 3 consecutive losses called into question their Champions league candidacy. They are the team to knock off the perch in 4th which could be possible if results elsewhere don’t go their way. Spurs will play at home earlier in the day against Leicester and a win would give them a points advantage over their bitter rivals. That means there will be an increased importance for Arteta’s men to make sure this doesn’t happen and secure all 3 points.

Arsenal’s squad depth will play to their advantage on Sunday with the only absentees being Kieran Tierney and Tomas Partey. Even in these two talented players absence there is plenty of options for the manager to fill their spots for this game. They’ll feel confident facing up against West Ham the team who they have the most away wins against in the Premier League. The previous fixture ended 2-0 to The Gunners and there may be a similar outcome again. However, they’ll have to be the first team to keep a clean sheet against The Hammers at The Olympic Stadium all season.

West Ham fans have will have had something to cheer about every home game this season. They’re in the elite company of Liverpool as being the only 2 teams in the league to score in every single home game this season. This attacking prowess has definitely come at a cost. At the Olympic Stadium they’ve only kept a clean sheet 4 times from 17 games! This doesn’t get better overall with only 7 of their 34 games this season featuring a clean sheet for their backline. Their defensive injury woes don’t bode well for a clean sheet either, Ben Johnson might struggle running a bath let alone a Premier League defense.

Arsenal started the season with an impressive defensive record, but things have gone the other way in recent weeks. They’ve not kept a clean sheet in 5 of their last 6 league outings. They also look to have rediscovered their shooting boots in the last two games with 7 goals across the two matches.

Eddie Nketiah has found his way back into the starting line-up, and this appears to have mobilized and energized the Arsenal front line. Alexandre Lacazette’s role ended up being transformed into a false 9 and the introduction of a legitimate striker seems to suit The Gunner’s attacking exploits. Their losses to Brighton and Southampton might have gone their way with a little bit of luck and it seems they’ve found some at this stage of the season. They’ll be the favourites going into this against a distracted Hammers team and the expectation is they will win but at the expense of a clean sheet available at odds of 1.73.

Andriy Yarmolenko to have 1+ Shots on Target

West Ham will have to rotate their squad for this game sandwiched in between their European fixtures. A man set to benefit from this will be Ukrainian attacker Andriy Yarmolenko. He’s actually only started 1 Premier League game this season but players like Antonio, Bowen, and Lanzini will be likely given a rest for Sunday. The lack of a replacement striker means that he may even find himself as the candidate to lead the line in the absence of Antonio.

From the Cheat Sheet, you can see that he averages an eyewatering 1.8 shots on target per game. This is from a total of 3.96 shots per game which gives him a relatively impressive shooting accuracy of 45%. He’s played a pretty poor number of minutes this season, but when he’s played a significant amount of time as a sub, he’s managed to find the target for them. West Hams last Premier League game against Chelsea is good indication for why this is a solid selection.

Yarmolenko made his first league start in that game playing behind Benrahma and made good use of his time. He had 3 shots with 2 hitting the target, consistently being the one making dangerous runs into the box. All his shots came from inside the box in that game and that’s where the majority of his efforts tend to be. This will give him an improved chance of hitting the target from close range if his teammates can find him in there.

The Chelsea game landed a few days prior to the first leg of the Europa League semi-final. This gives us a good indication of Moye’s 1st and 2nd choice lineups for the two competitions and it’s clear that Yarmolenko has a place in the latter squad. I’m confident that he’ll be in the starting 11 on Sunday and he might even get a chance to play up front for The Hammers. Arsenal are not the solid defensive unit they were earlier in the season and the Ukrainian to trouble their keeper is available for odds of 1.57.

Prediction: Andriy Yarmolenko to have 1+ Shots on Target

Saka will be looking to make it 3 goals from 3 appearances after hitting the net against Manchester United and Chelsea in the previous fixtures. He hobbled in the last game but he’s been declared fit to play this weekend. Both goals came from the penalty spot in his newly inherited role from Alexandre Lacazette. It looks like he’ll be in the role permanently with his 100% strike rate following on from the previous 40% conversion rate. Arsenal receive one of the highest number of penalties in the league with 7 so far this season so there may be a chance that history repeats itself on Sunday.

He’s certainly not limited to goals from the penalty spot either, he managed 9 goals from open play prior to the two penalties which brought his total to 11 in the league. He’s also the top scorer for The Gunners in all competitions. Playing with confidence and coming up against a weak West Ham defence who have struggled for clean sheets makes him good value to get on the scoresheet.

As per the Cheat Sheet, he is no stranger to finding the target with 0.91 shots on target from 2.87 attempts per game. The majority of his attempts come from inside the penalty box which is an explanation for this. He is always actively trying to find shooting positions against his opponents typified by his 5 attempted shots last time against Manchester United. This could be a problem for West Ham who’ve had an issue with inverted wingers in recent weeks. Ansgar Knauff, Christian Pulisic, and Brian Mbuemo have all hit the net in recent fixtures which suggests that dealing with Arsenal’s width is something they underprepared for. Saka to get on the scoresheet on Sunday is available for odds of 3.75.

Back the 6/1 West Ham v Arsenal Bet Builder below ⬇️

Sign up to Paddy Power and get a full refund if your first bet loses. Grab an account through the offer below and place £30 on the 6/1 West Ham v Arsenal Bet Builder. Here are the two possible outcomes:

How to watch West Ham v Arsenal in the Premier League