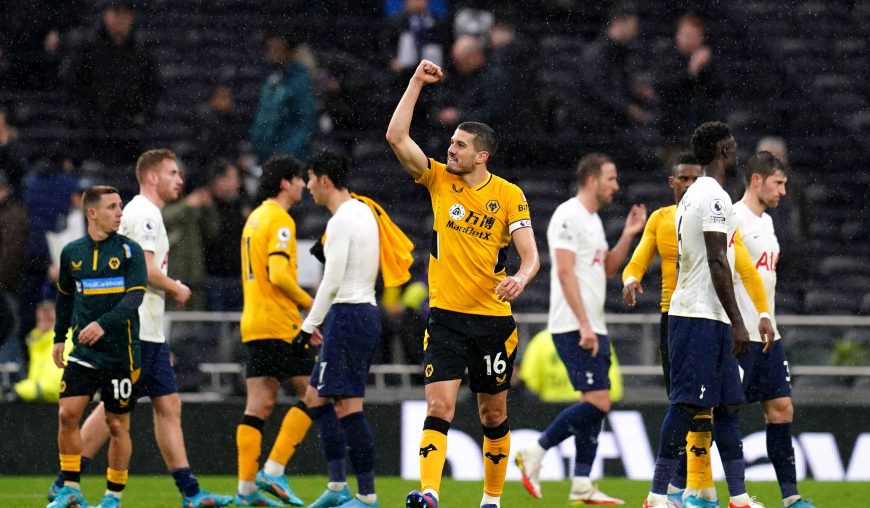 The final Premier League match of the weekend takes place at 16:30 on Sunday at Molineux Stadium. Wolves are enjoying a bumper season, they sit in 7th place, 10 points clear of their guests Leicester. On the other hand, Leicester have been disappointing compared to previous seasons under Brendan Rodgers and are safe but unhappy in 11th place. Although their form is telling a different story, both teams are evenly matched in terms of talent and will equally fancy their chances. To get you ready for a Sunday on the couch in front of the football, I’ve selected my Top 3 Bet Builder Tips and a complementary Cheat Sheet.

The home team will be in good spirits entering the match, Bruno Lage has confirmed that they will welcome the return of injured Pedro Neto and Joao Moutinho on Sunday. This means that they will be able to field a team that will be unhampered by any injuries with the return of the 2 Portuguese. Wolves’ are on a great run of form with 4 wins, 1 draw, and a loss in their last 6 matches. Their loss to Arsenal at their home ground in February disrupted an unbeaten run that dated back to the 11th of December. Their previous fixture against Spurs consolidated the view that they are qualifying spot contenders as they dominated in a surprise 2-0 win. They’ll be looking up the table with their games in hand with the knowledge that if they keep this positive momentum, they’ll be in Europe next season.

Leicester won the reverse leg at their home stadium in August 1-0, with the injured Jamie Vardy proving to be the difference maker. He’s certainly not the only absentee tomorrow, James Maddison and Caglar Soyuncu were forced off midweek and it appears unlikely they’ll be match ready by the evening. The treatment room at Leicester is starting to look cramped as they’ll squeeze in besides Castagne, Fofana, Justin, Bertrand, and Evans. Patson Daka will be the only one present from Leicester’s top 3 scorers tomorrow and while his displays have been bright, he’s been lacking in consistency this season however, 10 goals from 23 appearances is a respectable return. A lack of consistency is applicable to Leicester’s form too, they’ve only managed 1 win in their last 6 games in the league. This makeshift Leicester team will hopefully have more confidence to return to winning ways in the league, after their 4-1 Europa League win against Randers. Now the time is as good as any to do so as they face off against a Wolves team who have been more successful away from home this season.

Wilfred Ndidi To Be Booked

The absence of both Soyuncu and Evans is alarming for Leicester fans. The 2 centre-backs have formed an unlikely excellent partnership in their time together in The Midlands. Starting on Sunday will be either one of 2 options alongside Daniel Amartey in a back 4. Jannik Vestergaard or Wilfred Ndidi are the candidates to shore up the Leicester defense and I believe it will be the latter that will step in. Vestergaard has had a torrid time at Leicester since joining from Southampton and has seen his appearances limited to just 6 starts. Wilfred Ndidi is one of Leicester’s most consistent performers and has shown his adaptability to slot into various roles for his manager. The previous absence of the two centre-backs saw him start at the back against Liverpool in February over the Dane so it appears that this will be a similar affair.

In his 15 appearances this season, he’s accrued 3 yellow cards in the league this season. He’s the 2nd most booked player for Leicester this season behind James Maddison in all competitions. This is explained by the Cheat Sheet, which shows that he commits a consistently high number of fouls per game this season averaging 1.8 so far. It looks problematic for the Nigerian playing out of position on Sunday as he’s facing up against a frustrating Wolves’ frontline. Fabio Silva 2.94, Daniel Podence 2.27, Hwang Hee-Chan 2, Raul Jimenez 1.88, and Francisco Trincao 1.7 are the top 5 highest consistent drawers of fouls for Wolves this season as per the Cheat Sheet. If one comes off, another tricky attacker will replace them, and they are very capable of causing havoc even in the wake of the departed dynamo Adama Traore.

Wolves have been very effective in convincing refs to discipline their opposition this season, they are the number 1 team for cards against them with an average of 2.43 handed out to their opposite numbers. This is even higher when playing at home, they average 2.82 cards against them when in front of the home support at The Molineux. The referee in charge of the action is comfortably in the top half of the disciplinary charts with an average of 4.19 cards per game witnessed in his matches this season. Ndidi is in real danger of falling foul of Pawson tomorrow if he starts at centre-back, although if Vestergaard features he will play slightly further forward in a defensive midfield role. The Nigerian is available for a booking at odds of 3.0 on Paddy Power.

Prediction: Wilfred Ndidi to be Carded

Wolves To Win Or Draw

As mentioned previously Wolves have been more successful on the road this season than at home. However, this is slightly misleading based on recent form, 3 of 5 of their home losses came right at the start of the season. Since September, they’ve only lost twice at home, and this was against decent opposition in Liverpool and Arsenal respectively in 1-0 defeats. Similarly, all 4 of their home wins and 2 draws have occurred after the opening 2 months of the season which shows that they are on an upward trend of good home form.

Leicester have several key players missing in important areas of the team for Sunday’s match. This is not good news for Leicester fans who are looking to reverse a dismal run of form that has seen only 1 win in their last 6 games. They have a far stronger record at their own stadium this season having only managed 2 wins away from home this season. In their 10 away games they have managed 0 clean sheets, which makes them the only team in the league to do so. Wolves don’t score many at home with 8 goals in 11 games, however this is balanced by only conceding 8! This means that Leicester will probably have to score 2 to get the result which seems unlikely based on recent fixtures.

With their main goal threats absent and a leaky defense on the road this season, it may appear that Brendan Rodgers would be happy to get a point from this game. The two teams are on very different trajectories, and I believe that this well-equipped Wolves squad are unlikely to get beaten on Sunday evening by an underperforming Leicester. Wolves to win or draw is available for odds of 1.29.

Leicester’s attack will be helmed by young Zimbabwean Patson Daka. As mentioned previously his return has been statistically impressive but his performances have been slightly inconsistent over the course of the season. He scored in the Europa League fixture last time out against Randers and he will be carrying the bulk of Leicester’s goalscoring responsibility on Sunday. He hasn’t scored in his last 3 Premier league outings, but this was preceded by a run 3 games with a goal in each in the league.

He has all the tools to replace the legendary servant of Leicester Jamie Vardy who is undoubtably still talented but appears to be leaving the peak of his powers. He’s fast, strong, and constantly on the shoulders of opposition defenders which is concerning for Coady and co. who will be left vulnerable to balls in behind when their wingbacks are bombing forward. He’ll be looking to catch out these relatively less mobile Wolves’ centre-backs on the turn and find his way into the box where the majority of his shots come from.

This partially explains his impressive accuracy when searching for the target. Over 50% of his attempted shots find the target this season. This makes him the most likely out of any of the guaranteed starters from both teams to test the keeper tomorrow, as per the Cheat Sheet he manages a respectable 1.2 shots on target per game. Wolves will inevitably concede some shots tomorrow as they average 12.1 shots on their goal per game. Although I believe that Wolves are unlikely to be beaten tomorrow, I think Leicester have a good chance of registering on the scoresheet. They’ve only failed to score once in 10 away games this season so the Zimbabwean will be on the receiving end of some attacking service tomorrow at some point. Patson Daka is available to grab a shot on target at odds of 1.25.

Back the 5/1 Wolves v Leicester Bet Builder below ⬇️

Sign up to Paddy Power and get a full refund if your first bet loses. Grab an account through the offer below and place £30 on the 5/1 Wolves v Leicester Bet Builder. Here are the two possible outcomes:

How to watch Wolves v Leicester in the Premier League