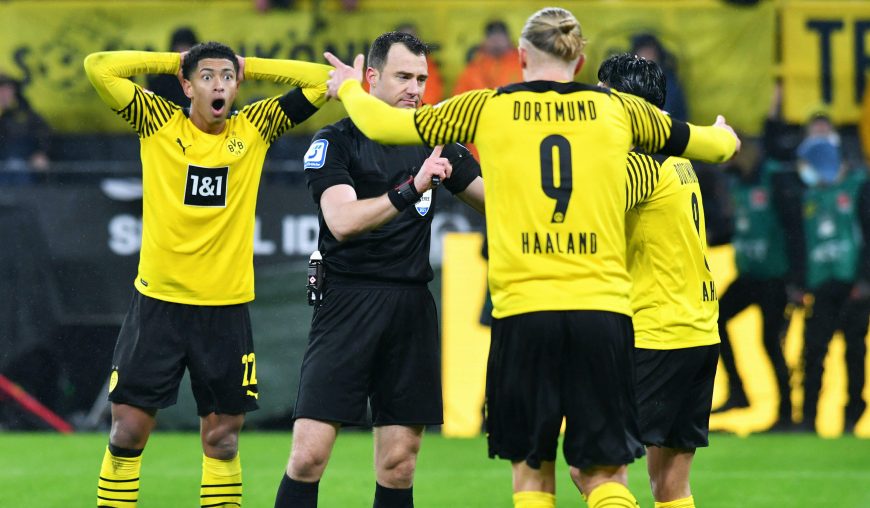 The two giants of German football will clash for the final time this season at The Allianz Arena on Saturday at 17:30. Both teams’ season could realistically end this weekend if Bayern take all 3 points. This would seal the title for the reigning champions and all but guarantee Dortmund to finish behind them in 2nd. The visitors will be looking to spoil the party and prolong their title race in a game that always delivers a spectacle. To get you clued up for the best German football has to offer. I’ve produced my Top 3 Bet Builder Tips and a complementary Cheat Sheet for Saturday’s premier game.

Bayern’s exit from the Champions League at the hands of relative Spanish underdogs came as a surprise to many especially over 2 legs. Villarreal deserved to go through with convincing home and away performances and it’s worth remembering that they did the same to Italian giants Juventus in the previous round. They’ve been going through the motions in the Bundesliga with 4 wins in their last 6 games, however a more convincing 3-0 victory last time against Arminia Bielefield suggests they’re moving on from The Champions League. They’ll enter this match with a full-strength side and no other competitions serving as a distraction. The fans and players will see this as a homecoming party to clinch the title on home soil against their biggest competitive rivals. They’ll certainly fancy their chances too considering they haven’t been beaten by Dortmund in 3 years and 5 years in front of their home fans.

Dortmund fans will be a little dissatisfied with their teams’ title challenge this season. Bayern haven’t exactly run away with the league, but their team has not exerted any significant pressure on the defending champions at any stage of the season. Their leaky defense has conceded a significant 43 goals this season, which is relatively poor compared to Bayern’s 29 and 3rd place Leipzig’s 31. This poor defensive performance has been a factor in their sluggish title charge and is concerning coming up against Bayern, who have scored 3 or more against them in the last 5 meetings. In front of goal, they’ve overperformed too largely due to the mythical Erling Haaland contributing to 76 goals from an incredible disparity of 58.78 xG! A 6-1 win over Wolfsburg last time out is promising for the visitors but a raft of injury concerns will keep the fans realistic about their chances. Coming up against the best team in the country and not having the odds stacked in their favour is generally not a recipe for success in The Bundesliga.

Both teams have not struggled to find the net this season. Bayern top the scoring charts with 89 goals and Dortmund are comfortably in 2nd with 76 themselves. Both teams boast their own world class striker which certainly helps who will be fit and ready for Saturday evening. Robert Lewandowski is the league’s top scorer with an incredible 32 goals which means he’s on track for another European Golden Shoe by a current margin of 7 goals. Haaland’s goals have been dampened by injury issues this season having only scored 18 domestically this season. However, he’s played 18 times in The Bundesliga which works out at a goal a game! If he’d managed to stay fit this season, it’s certainly possible he could have been competing with the Polish striker for Europe’s top goal scorer.

Bayern’s focal point is definitely their number 9, but they have other options to find the back of the net too. Coman, Sane, Muller and Gnabry all have respectable goal tallies this season and the evergreen Marco Reus plays a good second fiddle to Erling Haaland for Dortmund. The two teams have the highest instances of 3 or more goals in the league too. For Bayern 80% of their games have landed for over 2.5 followed closely by Dortmund’s 73%. It’s expected Bayern will do the bulk of the scoring on Saturday and it should be made easier by the fact that Dortmund have only kept a clean sheet 3 times away this season and conceded a whopping 43 goals! This selection has landed the last 5 times these two have played in all competitions and is available for odds of 1.2.

Borussia Dortmund probably still rue the day they sold Robert Lewandowski to their championship rivals Bayern Munich in 2014. Leaving on a free transfer it has become a deal synonymous with the business relationship between the two outfits. It followed the departures of Mario Götze and Mats Hummels who eventually found their way back. Since the Polish striker left, he has scored more goals against Dortmund in all competitions than any other Bundesliga club. In 15 league appearances against his former club, he has scored 22 goals against them! This form is even better recently. In his last ten league appearances against BVB he’s only failed to score once netting 18 goals in the process.

His 30 appearances in the league have resulted in 32 goals giving him a strike rate of 1.07 goals per game this season. This is consistent across all his games this season for club and country with 51 goals from 46 appearances. The Dortmund backline he will be facing up against will be without first choice keeper Gregor Kobel, first choice centre back Mats Hummels, and first choice right back Thomas Meunier. This is worrying for veteran backup keeper Marwin Hitz, who will be tasked with keeping the prolific number 9 out of the Dortmund goal.

The 33-year-old has shown no signs of slowing down and will be on penalty duty if the need arises with a conversion rate of 91%. This is a huge occasion for Lewandowski and his teammates to secure a 10th consecutive Bundesliga title. Throughout this season he’s scored 2 or more goals 14 times for Bayern in all competitions including the last meeting against Dortmund. He has never shied away from big occasions in his career and I’m expecting a vintage performance and at least a couple of goals from him on Saturday night available for odds of 2.5.

Jude Bellingham to be Shown a Card

The goalscoring exploits of Haaland dominate the headlines in Dortmund, but English football fans will be focused on the developing talents of Jude Bellingham. His move from Birmingham for around £25m raised a few eyebrows especially when they retired the number 22 shirt after a measly 42 appearances. It appears Dortmund’s scouting department got it spot on though. The young midfielder has nailed down a starting spot in a competitive Dortmund side with his impressive performances.

As good at football as the 18-year-old is, his discipline could definitely be worked on. He is the most booked player in the Dortmund side with 8 yellow cards from 28 appearances in the league this season. As per the Cheat Sheet he averages 1.37 fouls per game. I’m suspecting this will be even higher in the absence of his midfield partner Axel Witsel, who soaks up a considerable amount of defensive pressure on the Englishman. He’s not exactly in the referee’s good books either having called out the performance of Felix Zwayer in the last fixture between the two sides. The 3-2 victory for Bayern Munich earlier this season saw him pick up a booking amid the controversy and I’m expecting the same again.

Dortmund are quite badly behaved on the road picking up on average 2.27 cards per game when on their travels. He’ll be chasing around Joshua Kimmich around for the ball on Saturday night who draws on average 2.2 fouls per game. Also spelling trouble for Bellingham will be the presence of Thomas Muller with 1.12 fouls per game and potentially Jamal Musiala with 1.86 respectively. He’s available to be carded for odds of 4.33 on Paddy Power.

Prediction: Jude Bellingham to be Shown a Card

Back the 12/1 Bayern v Dortmund Bet Builder below ⬇️

Sign up to Paddy Power and get a full refund if your first bet loses. Grab an account through the offer below and place £30 on the 12/1 Bayern v Dortmund Bet Builder. Here are the two possible outcomes:

How to watch Bayern v Dortmund in the Bundesliga