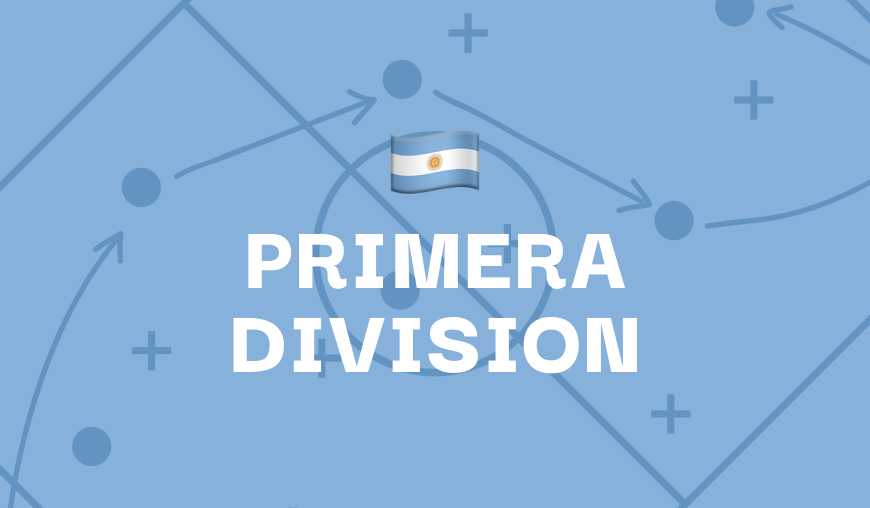 In this first Argentinian game on Sunday, Group A leaders Banfield takes on number three Defensa y Justicia. Banfield have had a good start to the season, with eight points in four games. Their defence especially has been good so far with only two goals conceded and the xG gives the same picture, as they barely give away good scoring chances. However, they have had a fairly easy schedule so far and none of the teams they played are known for their attacking strength.

With Defensa y Justicia they will face a team from a whole different level in this game. Defensa are only one point behind Banfield and finished second in the league last season. With Miguel Merentiel, they managed to keep one of their most important players and this season the Uruguayan striker has again been valuable with three goals. Defensa are the highest scoring team in the league so far and with four different goalscorers apart from Merentiel, their game is not hung up on one or two players.

It seems that Defensa y Justicia will be complete for this game as midfielder Raul Loaiza recovered from his injury. Banfield will be without left back Emanuel Coronel, who was sent off in the last game. Banfield have only conceded twice so far, but after a relatively easy schedule, they will now face one of the best attacking sides in the league at full strength, so I suspect there will be goals.

Boca Juniors are again showing that they are going for the Copa de la Liga title. They claimed eight points in four games, but both times they lost points, it looked to be complacency and bad luck, rather than a lack of quality, as they gave away leads in the final minutes. Against Independiente they were winning the entire second half, but lost left back Frank Fabra with a harsh red card after 70 minutes. Independiente took control of the game and finally equalised in the 89th minute.

Huracán claimed six points in four games, but last game against Velez Sarsfield, they pretty much got the victory handed to them. After 35 minutes, Velez conceded a red card, a penalty and Huracán scored twice in two minutes to put the game to bed before half-time. Their other three points also came against ten men, so the six points so far don’t tell the whole story.  Boca Juniors will be complete for this game and Paraguayan international Óscar Romero will get his first league start, after being the star player in the cup match midweek. Dario Benedetto, who returned to Boca from decent spells at Olympique Marseille and Elche, scored twice last week and is picking up form.

Despite the fact that the difference in the league table is only two points, the difference should have been much more and Boca is far superior in quality, so I expect Boca to claim a fairly easy win this game.

In the first game on Monday, Arsenal de Sarandí will host Lanús, in a game between two teams who haven’t had the best start to the season. With four points in four games, both teams are sitting in the bottom half of the table and things aren’t looking that good for either of them. For Arsenal this situation is not that strange as the team finished bottom of the league last season, but Lanús had expected more from the season start. The club finished tenth last year, and for a large part that was down to José ‘Pepe’ Sand.

The 41-year-old striker was second in the top goalscorer table last year with 15 goals in 24 games and also already found the net this year. However, Sand hasn’t been that fit yet and that seems to cost the side as they’ve only scored three times. Lanús will be without Diego Valeri and Nicolas Pasquini due to illness, but they won’t be missed much because they haven’t been sure starters. Defensively, Lanús have been rock solid, barely giving away chances, but the biggest problem is that they aren’t creating much this season.

Arsenal’s defence is a bit leakier, but they aren’t doing much better when it comes to creating scoring opportunities, so I expect a match with few goals here.

Sign up to Betfair and get a full refund if your first bet loses. Grab an account through the offer below and place £20 on the 9/2 Argentine Primera Division Best Bets Treble. Here are the two possible outcomes: