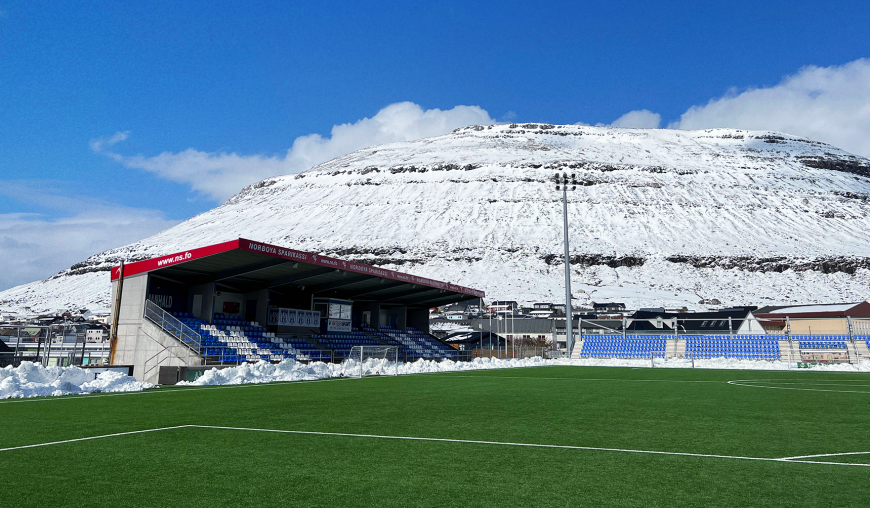 What a trip, what a country. A population of around 48,000 people, all of whom are football mad and extremely welcoming. If you’re a football fan that believes the sport exists outside the English Premier League then you will love the Faroe Islands…

16 months after my followers and I agreed to sponsor B36 Torshavn, I finally booked a flight to visit the country and meet representatives of the club.

I hired a van, bought a football and set off to visit every Premier League stadium on the islands. It leisurely took me two days to visit every stadium, including the national stadium, but it could’ve easily been done in 24 hours

The crazy thing is, you can literally just rock up to any ground and go have a kick about… Imagine doing that at Hampden or Wembley!

Here they are, in all their glory, 12 of the most scenic stadiums in the world, located in one country.

The first venue ticked off was the home of Skála IF and yes, it was as cold as it looks.

Located in the small town of Skáli with a population of only 740 people, the club are current champions of the 1. Deild (the second tier) and at the time of writing, sit bottom of the Premier League.

This one felt the most surreal, probably because it was the first one I did, look at those views.

We decided to start at the most northerly stadium (Skála was en route) which belongs to EB/Streymur. Despite being the furthest north, it was only a 45 minute drive.

EB/Streymur is the result of a merger in 1993 between Eiðis Bóltfelag and Streymur. Because of this, they actually switch home matches between Vøllurin í Hólmanum (the stadium I visited) and Við Margáir. I didn’t realise this at the time so unfortunately didn’t visit Við Margáir.

Interestingly, Manchester City faced the club in 2008 in the UEFA Cup first qualifying round. Due to UEFA regulations, the match had to be played at Tórsvøllur, the national stadium in Torshavn, where Manchester City won 2-0 on the night and 4-0 on aggregate.

This was the one I was most excited about but arrived to find it has been turned into a campsite as no team wanted to play here.

The setting is unbelievable but I have no idea how any away team bus got to the stadium, it was hard enough to stay on the road in a van, sheep crossing didn’t help mind.

This was the home stadium of EB (Eiðis Bóltfelag) prior to the merger with Streymur in 1993. It’s astonishing it was actually used as a senior football pitch, one clearance and the ball is most likely in the sea.

As I approached the pitch in the van, someone was painting the view, which was quite remarkable.

I’ve decided this or Toftir are my favourite, it was amazing but also by far the coldest. It’s fully enclosed by mountains with a wee village just behind the goal. Beauty.

Vikingur was founded in January 2008 with the merger of GÍ Gøta and Leirvík ÍF. GÍ Gøta was a very successful Faroese club in the 90s, winning the Premier League four consecutive years between 1993 and 1996, they also faced Raith Rovers and Rangers in the UEFA Cup.

I randomly got talking to the groundsman and it turned out to be Magni Jarnskor, who played for GÍ Gøta against Raith Rovers and Rangers. He also played 27 matches for the national team, including matches against Spain, Scotland and Denmark. He had fond memories facing the likes of Paul Gasgoigne, Brian Laudrup and Jörg Albertz at Ibrox.

We went further up the mountains to find Í Fløtugerdi, home of Fuglafjørdur (I have absolutely no idea how to pronounce either the stadium or the team).

The population of Fuglafjørður is 1500, the stadium capacity is 1200 with 360 seats. At the time of writing, the club are top of the 1. Deild having been relegated from the Premier League last season.

The groundsman hadn’t cleared the snow which made it difficult to play but the scenery was insane. I really like the stand perched above the wide dugouts.

This is the richest club in the Faroe Islands, and it shows in their stadium. Klaksvik is the second largest town in the country with most people working in the fishing industry.

KÍ are fast becoming the most successful club in the country. In 2019 they won their first title in 20 years and also reached the UEFA Europa League second qualifying round for the first time.

In 2020 they went one better, becoming the first Faroese team ever to reach the Europa League play-off round by beating Dinamo Tbilisi 6-1 in the previous round. They lost 3-1 in the play-off, Dundalk went on to draw Rapid Vienna, Molde and Arsenal in the group stages.

KÍ won the league again in 2021 with 72 points from 27 matches and a record 99 goals, at the time of writing they are top of the league with maximum points after five matches, 16 goals scored and one conceded.

I met the kit lady who gave me a tour of the main stand, she is the Grandmother of club captain and Faroese international Brandur Hendriksson.

Well, apart from absolutely stacking it in front of the groundsman when attempting a crossbar challenge, I really liked this one.

NSI Runavik lost to our team, B36 Torshavn, in the Faroes Cup final last year. It was a huge game, not only to become Cup champions, but also gaining entry to the Europa Conference League qualifiers.

For NSI, the defeat meant that the budget had to be cut for this season, and it hasn’t been a good start. At the time of writing, NSI are 2nd bottom of the league with only three points from five matches.

I watched our team B36 Torshavn win 2-0 the following day in a league match. It looks even better with the sunset…

I mean, look at it. It’s beautiful. This is the former national stadium and is located in the mountains which gives an incredible view of the ocean and islands behind the goal.

Being the former national stadium, it’s full of history. This is the stadium Faroe Islands held Scotland to a 2-2 draw in September 2002, it also hosted a famous 6-2 defeat against Spain in 1996.

Sometimes, the stadium is used for U21 international matches and European qualifier matches by clubs whose stadiums do not meet UEFA regulations.

You can actually stay at the stadium, it’s used as a hotel all year round.

Home of B36 Torshavn

The San Siro of the Faroe Islands, both Torshavn sides play here and have a stand each. The stadium is located at the heart of the capital and is approximately 10 metres from the national stadium, Tórsvøllur.

What I found incredible about this stadium is both Torshavn sides have an identical stand on the same side of the pitch.

HB Torshavn is the original Torshavn club, B36 were formed in 1936. I’ve sponsored B36 Torshavn for two seasons now and this trip was the first time me visiting the club.

In addition to the senior and second teams, the local school uses the pitch three times a week for two-hour football classes.

Also, B36 have the best sponsor boards in the league…

Not bad, not bad. There was a family playing down the far end and a man walking his dog in the other goalmouth when I rocked up.

Cool stand but the quality of turf wasn’t the best, although apparently they’ve had an influx of cash so might be improved soon…

This one is very close to the airport, it’s located on Vagar Island and is around a 10 minute drive from Vágar Faroe International Airport.

07 Vestur is a result of a merger between FS Vágar 2004 and SÍ Sørvágur in 2007. This new name refers both to the founding year of the new club as well as the location of Vágar island.

This is the only stadium I’ve ever seen with a boat next to the corner flag. It was a really cool setting and being close to the airport you occassionally see a plane flying over.

The seating area is very exposed though, definitely recommend a big coat.

It’s not fully finished yet but this is a really quality stadium, I also think I have a weird obsession with the floodlights…look at them! Again, I was allowed to just walk on the pitch and wonder around the stands and have a kick about. Unbelievable.

It really was surreal being able to just walk on and kick a ball around and in the net at the national stadium, the same pitch Faroe Islands lost 1-0 to Scotland only six months ago.

On the Friday evening we had a kick about on the pitch then sat in the stand to watch B36 2nd team vs Vikingur 2nd team, can of beer in hand. It was great.

12 stadiums covered all on about half a tank of petrol thanks to their under-sea tunnels. It took me two days on and off but could be done in a single day if you really went for it.

I am already looking forward to returning and I hope this gives some of you even more of a reason to head off to the Faroe Islands to watch and play some football.

A beautiful country with very friendly people. They love football and they’re grateful to meet anyone who shows interest in their local game.

Got a mate who would love this trip? Share this article with them