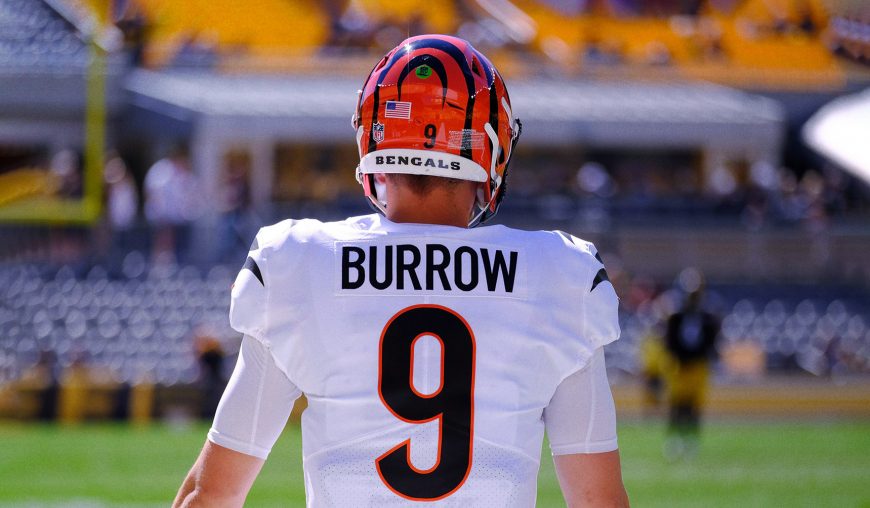 For the second time in two years, and only the second time in the history of the NFL, the Super Bowl will see one team have home advantage, as the Los Angeles Rams look to repeat what Tom Brady & the Tampa Bay Buccaneers achieved just over one year ago, in hoisting a Lombardi on home soil. Sean McVay & his Rams sacrificed the future by trading away most of their high draft picks for QB Matt Stafford & outstanding Super Bowl MVP & Champion Von Miller, adding to an already star-studded line up. We’re now only 60 minutes away from knowing if the all in, win now strategy truly pays off.

Standing in their way are the upstart Cincinnati Bengals, a franchise who hadn’t won a playoff game in 31 years heading into the 2021 regular season, star quarterback Joe Burrow was returning from a gruesome ACL tear in his rookie season, not many outside of Cincy had the Bengals down as their pick for AFC Championship. After the former LSU QB & Heisman winner’s injury, many questioned the Bengals decision to pass on highly rated left tackle Penei Sewell in the 2021 NFL draft, instead opting to select Burrows former college teammate and wide receiver Ja’Marr Chase. Pick 5 from round 1 looks to have been one of the best decisions the Ohio franchise will ever make, as Chase lit up the league with 13 touchdowns in 17 regular season games, and was fourth in the entire NFL in receiving yards, a category in which Rams star Cooper Kupp dominated.

The Rams enter this one as favourites, and for good reason. At home in So-Fi stadium, LA have won 7 of 9 regular season games, whilst defeating both the defending champions Tampa Bay, and exorcising their 49er demons, dramatically overcoming their NFC West rivals who had won all six of their previous match ups. As mentioned in the intro, only one team have played a Super Bowl at home, and the Tampa Bay Buccaneers put a resounding 31-9 score up against a then favoured Kansas City.

Despite the game being in Los Angeles, the crowd is expected to be a mix of Rams, Bengals and the other 30 NFL franchises fans. That might be a problem for most sides, but playing at your home stadium with a neutral or outnumbered support is no new ground, Los Angeles owners put a ban on ticket sales outside of Los Angeles zip codes for their NFC Championship game with the San Francisco 49ers, whose fans still found a way to turn So-Fi red, a Super Bowl atmosphere will be of little distraction to this experienced side.

In the regular season, Stafford threw for almost 5000 yards, averaging over 287 yards per game, and only threw for 280 yards or less in 5 games, with the Rams losing 3 of them. There’s a clear recipe for success in LA, and that is through the air.

McVay has leaned heavily on the passing game throughout the postseason, Stafford’s average passing yards have increased to over 301 per playoff game, and with Cam Akers really struggling to get anything going in the ground game since his return from an Achilles injury late in the regular season, that trend is expected to continue. Even late in games when running the clock down is usually via running the ball inside, Stafford has relied more on checkdown passes to Tyler Higbee and Cooper Kupp in the slot. That is largely down to a completely unreliable running game, in Akers absence, LA went with Sony Michel, Jake Funk & Buddy Howell, with no player staking their claim as a suitable replacement to depend heavily on, whatever the game, whatever the situation, The Los Angeles Rams are going to throw the football. Paddy Power offering less than evens is a strong early indicator on which way the game is expected to go.

Cooper Kupp led the league in touchdowns, yards and receptions, and was the first to do so since the legendary Steve Smith became only the third to ever do it in 2005! Stafford’s #1 receiver is always going to play a part in anything the Rams scheme up, but one man looking to benefit from triple crownwinning Cooper Kupp likely being in double coverage for the majority of the game is WR2 & superstar in his own right Odell Beckham Jr.

Beckham was cut by the Celevland Browns after a miserable time in Ohio, a trade from the NY Giants promised much but delivered little, with former LSU teammate Jarvis Landy becoming Baker Mayfield’s go to guy early in their failed WR superstar tandem. It would be poetic justice for OBJ to end his long and laboured stay with the Browns, and complete that season with a Super Bowl TD and ring, against The Buckeye State’s other team. Ultimate sporting redemption. If that’s not enough, OBJ’s targets have increased each game this post season, and he had his most targets and receptions in a Rams uniform only two weeks ago.

OBJ will spend a large proportion of the game dualling with Eli Apple, the Bengals cornerback has struggled in man coverage all season, which was highlighted in a torrid first half in the AFC Championship game. Apple will be tasked with shutting down those deep passes Stafford has built a career on. Look to the Rams signal caller to relentlessly challenge the veteran pass defender with deep shots outside of the numbers.

The Bengals came into this entire play off picture as underdogs, and it is a tag they wear with pride. Joe Burrow has the look of a man who thrives with a chip on his shoulder, and leading his team to victory from an eleven point deficit in Arrowhead is as difficult a task as any he may face Sunday night. Confidence is high. They say in football you have to establish the run to earn the right to pass, and whilst Joe Mixon hasn’t rushed for less than 48 yards this entire postseason, with Aaron Donald, Leonard Floyd & Von Miller barrelling down the heart of an O-Line that has at times resembled a revolving door, the Bengals have found ways to win with Burrow remaining calm in the pocket, and the ability to make big time throws out of it, again and again.

Sunday will be no different, this has been a fairy-tale season that even Zac Taylor didn’t see coming, and if it is to end in success for Cincinnati, Burrow is going to need to put up serious numbers, a task he’s not had too much trouble with recently. 525, 446 & 348 are the yards Burrow has thrown for in 3 of his last 5 games. At 7/5, Burrow to do what he has done in 60% of those games is a value selection.

The Rams give up a touchdown on around 50% of opposition visits to the redzone, which catches the attention of redzone favoured target Tee Higgins, with 23 targets in the postseason, only 4 less than Burrows favourite target Chase. Just like the Bengals need a plan to deal with Cooper Kupp, the Rams are equally as respectful of Ja’Marr Chase, who will likely attract the attention of Jalen Ramsey, the mercurial cornerback known for his exceptional talent, and attitude to match. That, however, should be music to ears of Tee Higgins, who despite not yet registering a touchdown catch in the postseason, he is no stranger to the endzone, having taken in two against Baltimore in week 17. If the Bengals are to win against the moneyline favoured Rams, expect Burrow to rely on Higgins to use his big body in single coverage to find the end zone on Sunday.

On defence, Cincy will be buoyed by the Rams recent carelessness in possession, a fumble from Akers then Stafford on the Rams last two possessions in Tampa Bay, followed by a Stafford INT in the NFC Championship game, the Bengals will look to turn those opportunities into points. The Rams have given away 18 INT’s this season, that’s joint 3rd in the NFL, with only teams picking inside the top 10 of the NFL draft having thrown more. That is not the company you want to find yourself in.

Despite having found success in LA, Matt Stafford is still somewhat of a turnover factory, add that to the fact the Bengals have 21 takeaways on the year, including a pick 6 against now retired Big Ben Roethlisberger, Los Angeles will give Cincinnati opportunities to make plays on defence, it’s in their no risk it approach, and at 7/1 with Paddy Power, it wouldn’t be a shock to see one of Stafford’s deep balls on it’s way back to his own endzone.

Sign up to Paddy Power and get a full refund if your first bet loses. Grab an account through the offer below and place £30 on the 4/1 and 52/1 Super Bowl Bet Builders. Here are the two possible outcomes: